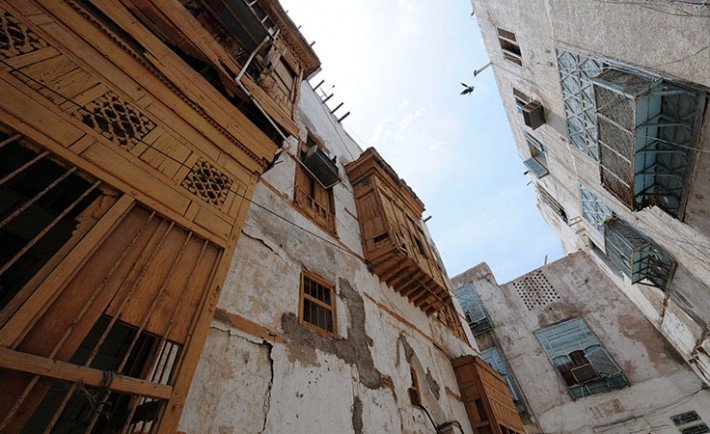 Saudi Arabia has a distinctive architectural heritage that has developed over centuries. The Kingdom encompasses a greater variety of architectural styles more than any other country in the entire Arabian Peninsula. The buildings of the Hejaz, the northern oases, the southern mountains, the central plains of Najd and the eastern Gulf Coast are entirely distinctive and local in their character.

Historically, building designs and materials were dictated by the climate, geography and resources available. Builders in the central region of the Kingdom preferred adobe for its malleability, abundance and insulating qualities. In western Saudi Arabia, stone and brick were common, while in the Hejaz and other western coastal regions builders used coral from the Red Sea.

Over the years Hejazi architecture has developed its own identity and is disparate from entire Arabia. Today it stands as a testimony to the region’s glorious past and is an epitome for coastal Red Sea architecture.

Hejaz’s architecture personifies the region’s importance during history, with extravagantly styled commercial spaces and residential buildings. Several towns in the Hejaz have been directly exposed to foreign architecture, due to the large number of foreign pilgrims the region received over centuries.

The region became a gateway to pilgrims traveling to the Holy cities of Makkah and Madinah. The former and latter themselves being part of the Hejaz saw many pilgrims settling in them, while in due process brought with them aspects of their craft and culture from their respective countries of origin. The region became a meeting point of various Muslim cultures, notably of Arabs, Indians, Persians and Ottomans which changed the architectural landscape of the region and play a crucial role in its rich heritage.

The residents of Hejaz used to build their homes using carefully selected rocks taken from the nearest coral deposits. These rocks were then molded using several manual tools then set down according to their sizes. The builders then positioned these rocks into Midameks – lines of rocks separated by pieces of wood (Takaleel) one meter apart. This technique helped spread the weight evenly over the walls and has allowed many centuries old multi storied Hejazi buildings to stand the test of time.

The wood used was retrieved mostly from the nearby Fatima Valley or imported from other countries (especially India) via the seaport. Imported wood for doors and pillars was a common construction material used in the homes of the mercantile elite. In some buildings even mud was used instead of the regular coral limestone, similar to those of the Central regions of Arabia.

The urban structure of Hejaz is drawn from a long customary regional building tradition. Towns in the Hejaz were like those of typical Arabian cities in terms of planning. Social events, trade and administration were practiced at its center where markets, mosques, and government buildings were situated.

Encompassing this core, closely built-up groups of houses were balanced by open spaces of diverse dimensions and forms, while minuscule and maze-like lanes created a typical Arab street fabric. 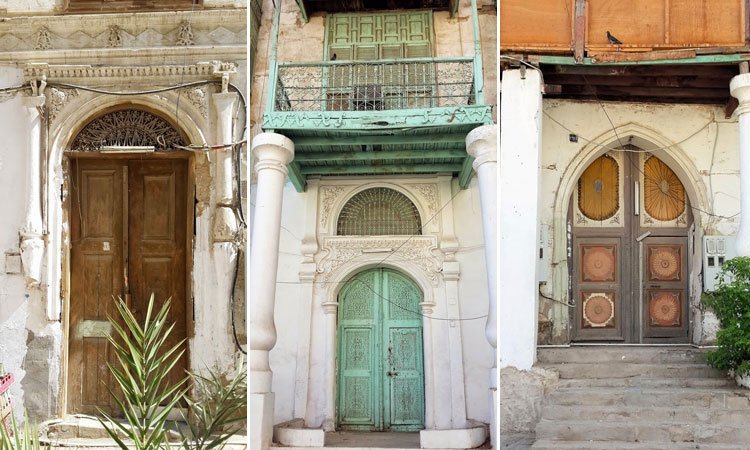 Ancient Arabs were always fascinated by doors. The countless possibilities that lie behind them have inspired many Arab poets to use the door as a metaphor for both optimism and pessimism. Muslim scholars also use the word Arabic word for door (baab) to distinguish different chapters of their books.

Hejazi architecture is no different with doors playing a crucial role; they are a means of displaying the wealth a household, form an integral part of the edifice and define the overall look of the building. The bright colors and bold designs on the front door provided a glimpse of the richness that lies behind it. Doors with floral, ornate, elliptical and geometrical patterns are a key feature in typical Hejazi doors. In fact many of these doors were imported from overseas, mainly Egypt, India, Java and East Africa. 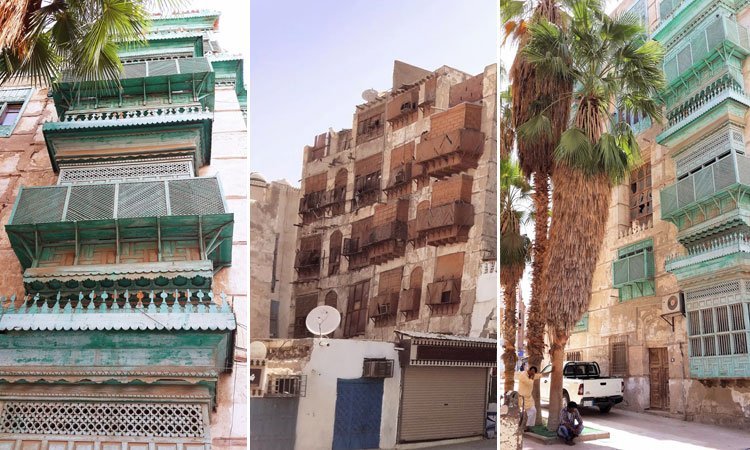 Rawasheen are bay windows which give a markedly different look for the Hejazi building. These latticed windows are adorned with delicate and convoluted wood works. What makes these rawasheen even more special is that they are nowhere to be found anywhere in the country except the Hejaz.

The word rawasheen, plural of roshan, originated from a Persian word meaning an elevated window which lets in plenty of light. These rawasheen are truly an architectural masterpiece, created in accordance with the climatic conditions of Jeddah they break up the sun’s glare but also let the cool sea breeze to enter the building when the inner windows are opened.

Not many years ago, many architects across the country have realized that they must learn to adapt and have become involved in the process of distinguishing elements of their culture from the anachronisms. At the same time they also have a growing personal interest in efforts to revaluate the standard forms of modern architecture in the light of national heritage.

Thus architects are focusing on elements which had for centuries contributed to traditional architecture and which they slowly began to realize, might just as logically inspire modern design. These elements include climate, building techniques, usage and forms of design.

The induction of Jeddah’s historical area (which in itself is an epitome of Hejazi architecture) in the coveted UNESCO World Heritage List, has promulgated the spread of Hejazi architecture far and wide. Perhaps looking at Hejazi architecture, all we can hope is to never lose the soul that inspired and guided us; that allowed us to develop our own identity and gave a rich heritage backing our future.