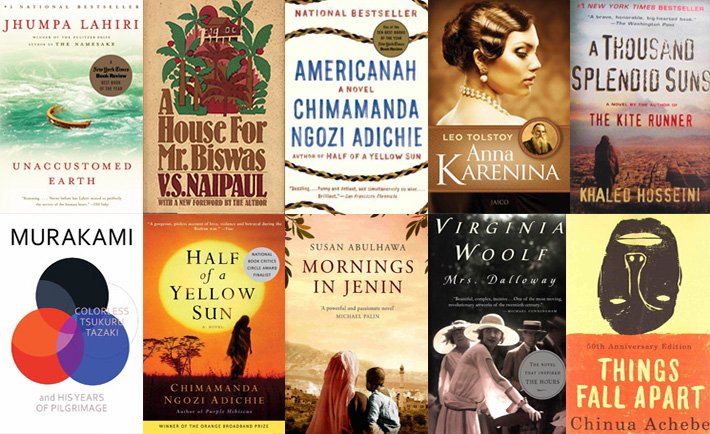 Possibly one of the best things about reading fiction is the exposure to different cultures and people’s ways of life. There are always lessons to be learned and oneness to be appreciated.

If you’re looking for books from different cultural backgrounds then this article is perfect for you! Here’s a list of books and the cultures you can explore through them:

The setting is London but the writer effortlessly brings in characters from different cultures. This book may not represent British culture but it represents a culturally diverse society in the heart of Britain. The book is perfect for teenagers and a great book to show you that beyond the ‘differences’ of culture and religion, we all need the same things in life.

A book that effortlessly tackles the modern vs. traditional debate, this work of African fiction is a delight to read. It will take you to a whole other world of Nigerian tribes, their ways, customs and religious practices. It’s also a great lesson history – colonisation of Africa by England.

4. Half of a Yellow Sun by Chimamanda Ngozi Adichie

This book is a tour de force of how war changes life. It will take you to the inner workings of the Nigerian society during the time of the Biafran conflict. It’s got some really genius plot twists and backstories. While the previous book in this list looks at the tribal or village life of Nigeria, Adichie’s book focuses on mostly the modernised version of the country.

If there’s a book that has flawlessly tackled the issue of race in America, it’s this one. The book combines Nigeria and America, but it really takes us deep into both these cultures. It’s a must read for anyone who wants to understand racism in America. It’s also a great expose on the ‘American Dream’.

If you love Rumi’s poetry this could be the work for you, although its general focus is on Rumi’s companion Shams Tabriz. The book will take you on two journeys, separated by quite a few centuries, yet still connected. It’ll give a fictionalised look into the Turkish society of way back when, and also a look into how these ancient doctrines about spirituality affect someone in our times.

Here’s another book that deals with the consequences on war. But this book is mostly about the friendship of two African American women in America. It will take you on a journey and really show you how the inner workings of this matriarchal culture.

8. Serious Men / The Illicit Happiness of Other People by Manu Joseph

If there is good, authentic Indian fiction, it’s this. Serious Men is not just about a poor man outwitting the Brains of his country, but it’s more about the Indian obsession with education and class hierarchy. It tackles issues on many levels but you should read it because it gives an unbiased view of India.

9. The White Tiger by Arvind Adiga

Here’s another Indian fiction with perhaps an even better look at the master-servant reality of India. This book is a genius work of fiction. It’s hilarious and serious at the same time. It gives an excellent look into an Indian family which uses dirty politics to stay in power.

10. The Museum of Innocence by Orhan Pamuk

Orhan Pamuk is an outstanding Turkish writer. For this book he actually curated a museum of the same name. The book will take you through the Turkish society in the second half of the 20th century. It’s an excellent work which represents the elite/modern vs. poor/traditional debate. It’s about one man’s obsession with objects that take him further away from his wealthy, modern part of society.

11. On the Road by Jack Kerouac

This book is all about America in the later part of the 20th century. It may not be an easy book to read but it’s essential if you’re interested in the Beat Generation of poets and artists. It’s all about dissatisfaction in the society, restlessness, madness and sadness. The entire book is an ode to road trips and travelling aimlessly.

12. Mornings in Jenin by Susan Abulhawa

An authentic take on Israel’s invasion of Palestine, this book spans four generations and all kinds of repercussions of war and trauma. It’s a powerful work which will take you on an emotional journey which begins in Palestine and spans five countries. A must read for anyone who wants to know more about the people of Palestine, and the drastic change in their life after the 1948 war.

13. An Unnecessary Woman by Rabih Alameddine

This book is a literary treat! It’s not an easy book to get through but it’s definitely a must read for lovers of literature. It’s a look at life in Beirut, and more particularly how the society treats divorced women. But that’s really not what the book is about. It’s about one woman and her solitary journey through literature. It’s authentic and complicated Arab literature.

14. The Girl in the Tangerine Scarf by Mohja Kahf

Set in Indiana, this book will show you what it’s like to grow up a Muslim in America. It looks at the struggles faced by Muslims from all kinds of backgrounds. The character in focus is a strong willed girl named Khadra, and through her story we get to know a lot about the political developments in America and the Middle East and racial and political prejudice. It’s both a personal and a communal story.

The book takes place in 19th century Russia – a time when Russians were very much interested in their Russianness and how to modernise and how much they should follow the footsteps of the Europeans. Anna Karenina is not just about a woman’s struggle, it’s about the society at large. There is a lot to take from this novel, including contrastive nature of two different cities, Moscow and Petersburg, and the link of goodness to the countryside. A must read in Russian literature!

Murakami is an essential choice for cotemporary Japanese literature. The titles mentioned are all remarkable in their own ways, and they will do a great job of introducing you to modern Japan. Other favourite works by the author are After Dark, 1Q84 trilogy and The Wind Up Bird Chronicle.

Amy Tan is one of the best writers to read if you’re interested in the blend of the Chinese and American cultures. Her work usually focuses on Chinese-Americans and their struggles with their traditional parents and race in America. Language and ‘foreignness’ is also a very important theme in Tan’s books. One of the major themes in The Joy Luck Club is the challenge to translate concepts and sentiments from one culture to another.

Jhumpa Lahiri is the perfect writer to choose if you want to read Bengali literature, although her stories usually focus on the Bengali-American background which is similar to her own. An Unaccustomed Earth is a collection of short stories which takes you through several stories which highlight the issues immigrants face in a foreign country, especially in terms of their identity and personal relationships. Namesake is another essential book to read if you want to explore this section of Indian fiction.

19. The Kite Runner / A Thousand Splendid Suns by Khaled Hosseini

Khaled Hosseini is a celebrated name in fiction. His storytelling abilities will take you to a whole other world and it’ll be exceptional and educational. His books will touch your heart and take you deep into Afghanistan and help you explore the religious, political and social conflicts. The titles mentioned are must reads for anyone who wants an authentic take on Taliban’s oppression and its repercussions.

Explore the society and culture of Trinidad through Naipaul’s books. In them you will find comedy intertwined with serious issues. A House for Mr. Biswas is literally a book about a man’s entire life – from birth to death.