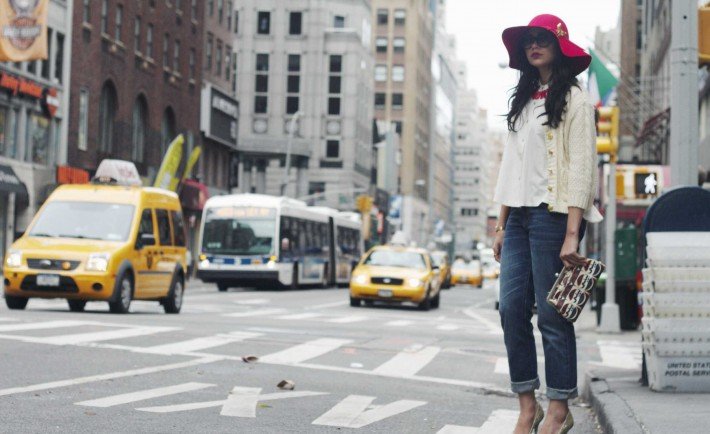 In a society that wasn’t equipped for new emerging brands, Alaa Balkhy was one of the pioneers of this new fashion era in Saudi Arabia. She is the face behind Fyunka, a brand that is influenced by pop culture with a fashionable aim to spread happiness through its unique customer.

Fyunka is a designer who tussled her way through social stigma and achieved great success from her brand. She graduated from Dar Al-Hekma in Jeddah majoring in graphic design. Her love for fashion, illustration and marketing took her to New York City, where she is currently studying for a Design Management Master’s degree at Pratt Institute. Fyunka offers products such as bags, tablet cases, phone cases, pouches, and more.

Can you tell me a bit about your background? Where did you grow up? What kind of education you had?

I grew up in Canada and was there till I was 9 years old before moving to Jeddah. It was a culture shock. I graduated from Dar Al-Hekma in Saudi. I went into graphic design by mistake. It was a happy mistake. I started working my second year of college until I graduated. I had two jobs. I was a graphic designer at a small design agency and an assistant at a local fashion brand.

So you randomly chose graphic design?

Yes, because it was the most appealing thing. I never thought that this is what I wanted. I always wanted to be a designer, but not a graphic designer. My dream was to create a brand and move to New York. Hamdullah, that was achieved, but when your dreams get achieved you have new dreams. My new dream is to sustain Fyunka. I don’t want to lose it and to create other local brands.

In the process of creating and promoting your brand Fyunka, did you think it was possible to achieve this kind of success?

I never promoted, because I never had a business plan. There was no “OK, I am going to start a brand, this is what I want to do” it wasn’t like that. I wanted to design bags and wanted to see how it goes. It went very well. I still have pieces that I made 10 from each design that was three years ago. Now I do like a 100-150.

What would you say was the biggest challenge for you throughout the whole process?

Honestly, that there was no support. Now it is changing, but when I first started there were no local brands. There were local brands, but they were old local brands. No one was doing photo-shoots for their collections. No one was making ready-to-wear clothing. There was no support from a society point of view. The perception of a local brand, were along the lines of “Who is Alaa? She is making bags in her house? Why is it so expensive?” They didn’t realize that there is a lot that goes into it. Then I tried my best to change it. I wasn’t going to back down. These are the prices, because this is the work I am putting into it. I am not selling the material, I am selling the idea. The ideas are worth something. So why would I buy a leather jacket from a designer brand where the material is not $3,000, but the jacket is $3,000 because you are buying the brand. I worked so hard to create the brand.

No, but there was the problem of production. We are not like other countries where people are used to people starting their own business. There are no production houses. I can’t go somewhere and tell them that I want this kind of bag with this color and this amount. I had to figure out a way from scratch, to get this from here and this from here. Get a tailor and train him. Do this, and if it doesn’t work try something else. I never took a course in bag design, but my shapes are so simple. There were no factories accessible to us. Some factories would produce 10,000 bags for you but I didn’t want that. Plus it is so hard, because I am a girl in Saudi. I can’t get around easily. I used to do everything by myself, go to stores and buy the materials I needed, it was very hard.

Putting your brand aside, who would you say is your biggest inspiration? Who do you depend on the most?

I don’t know. I guess … it’s so hard. Obviously you depend mostly on yourself. The reason I created Fyunka is not to depend on anyone. So it is a bit ironic. There are a lot of people I depend on. There is Nada Hakeem, a co-founder of the Loft (creative hub of film, photography and design services); we kind of started together. People that started their own brands inspire me. Like for example Razan Azzouni (Saudi fashion designer) inspires me. The girls behind Sotra inspire me. There is a lot and most of them are local. Definitely I am also inspired by Kate Spade. She couldn’t find a bag so she created one.

Besides Fyunka, are there any other passions in life that you would like to pursue?

I am a foodie. I appreciate good food. I appreciate gatherings and such. I love to organize events. This is something that I used to do in the past. Just like the small details and the people. Creating a place for people to connect.

Is there any country that you wish to travel to?

Japan. I like how organized they are. I am actually doing a collaboration with Casio and it’s amazing how the organized and prompt the people I’m dealing with are. It is fascinating. It is exciting how they are so into their culture. We kinda have the same values when it comes to family.

Are you a bookworm? Do you like reading books?

Tell me about your family.

I have three younger brothers and one older sister. My dad is a plastic surgeon and my mom owns a business. She does Hijazi baked goods, its called “Sufra Hijaziyah.” My grandfather is half Malaysian. My great grandmother was Russian. My grandmother is from Hadramoot (an area in Yemen) and the rest of my family are from Jeddah.

I want to backtrack to Fyunka, how did you come up with the designs? How did it all start?

It was baby steps. The first design I made was from confusion. It was making fun of ourselves. “Baba, I want a Birkin” (Birkin is a handbag by Hermès and costs $9,000 I just came back from Dubai and everyone had it and I was just like it is so amazing that we think we deserve these things. I was just wondering if anyone worked hard for their bag. It was making fun of ourselves. It caught on because it was so true. Everything starts with “Baba, I want…” I was 21, especially at that age. It was not even material things, it was like “Baba I want to go out. Baba I want to travel.” It was making fun of a social issue in a non-direct way.

Are you portraying yourself in the designs?

Why did you choose the name “Fyunka” for your brand?

I wanted an Arabic name that was very general and was very Hijazi slang. We say Fyunka a lot (Fyunka means bow in Jeddah slang). I didn’t want it to be bag or something, because I knew it was going to be more than bags later on. I wanted something general.

What are your next steps in life?

I want to graduate from Pratt Institute. I am doing a Master’s in design management. I want to do another Masters in illustration. That is definitely what I want to do. I want to have my own studio.

What three words would you use to describe yourself?