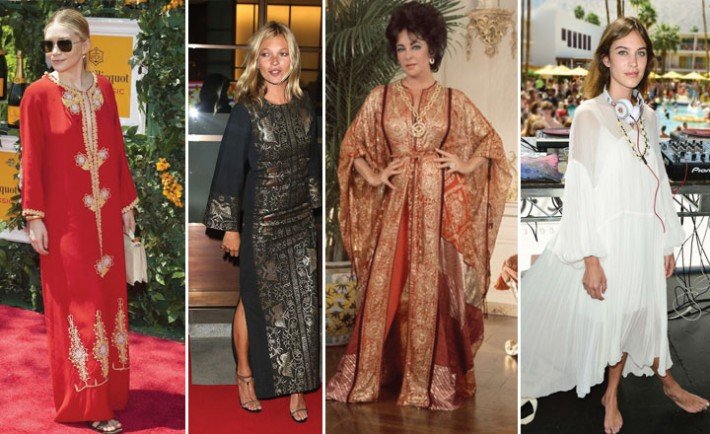 Stay sharp and fashionable this Ramadan.

Ramadan is the one-month of the year where all fashionistas stop wearing European couture in favor of the ever-forgiving kaftan. They give women the freedom to be on trend while wearing something from our culture. Oriental memorabilia became fashionable during the early 1920s when the west immigrated to Istanbul, Cairo, Shanghai and Casablanca. Diana Vreeland famously declared that kaftans are “fashionable for the beautiful people.”

Kaftans have always been, and will always be ‘in’ fashion. Women of the orient, the Far East, the Middle East and Africa practically live in them. The effect orientalism had on people’s clothes as well as their homes is apparent in history books, films and museums. But kaftans were not the rage just yet. Christian Dior introduced a modern take on a kaftan-like dress in the late ‘50s. But it was Yves Saint Laurent who created trendy avant-garde kaftans during the ‘60s. It made fashion history because it became the ‘hostess’ dress, worn when you’re hosting a party and it started the hippie chic ‘je ne sais quoi’ effortless look.

In the late ‘60s, Elizabeth Taylor was literally on top of the world especially after her tabloid filled relationship with Richard Burton became public. I remember watching a documentary about Elizabeth Taylor’s Christie’s auction a couple of years ago; I was astonished to find out that Taylor loved kaftans. She even got married in one! However, not any kaftan has an ‘Elizabeth’ seal of approval, only the crème de la crème were her favorites, like Pucci, Emanual and Thea Porter. Her kaftan collection of the latter designer was auctioned off amongst her luxurious jewelry collection. Taylor was clever enough to hop on the trend train from the start.

In the ‘80s, the kaftan lost its allure among the young and fabulous, but remained strong and essential to the older crowd.

Nowadays, after vintage became ‘in’, thanks to the likes of Kate Moss, vintage kaftans are making a big comeback. A lot of stars like Mary Kate and Ashley Olsen, Sienna Miller, Nicole Richie, Rachel Zoe and Alexa Chung, are wearing kaftans to events, premieres, or galas. Whether it is an Ossie Clark, Oscar De La Renta, Pucci, Leonard or Halston, a kaftan is a staple piece in any woman’s wardrobe.

In the GCC, we have loads of new and emerging designers that are creating wearable kaftans for the modern Khaleeji woman. We like kaftans from the talented Saudi designer Razan Alazzouni. We also like Sheikha Souad J Al Sabah from Kuwait, Naima Bennouna Lyoubi from Morocco and Muzungu sisters, a new ethnic-inspired brand by Dana Alikhani and Tatiana Santo Domingo, wife of Andrea Casiraghi.

Ottoman, Japanese, Indian, Moroccan and Khaleeji influences are always a part of any kaftan. Pick and choose your own and integrate it into your closet, or pair it with lace up sandals for a modern look. A kaftan is timeless, and no matter what, will always retain its glamour amongst the new generations of the west and the Middle East alike.