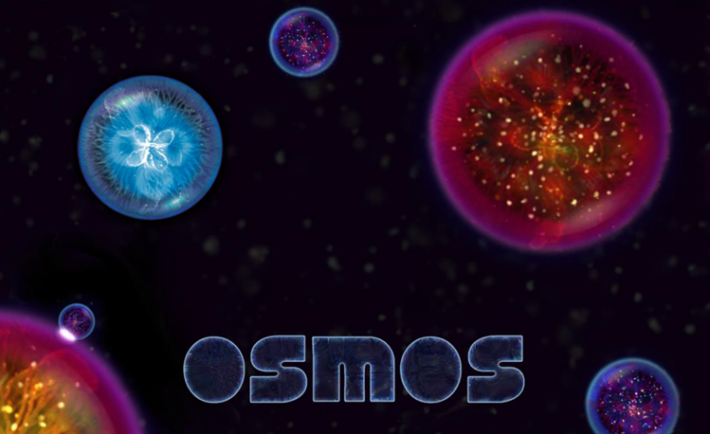 I’m doing Osmos as a bit of a lighter review, (I’ve been on a writing binge) and I think this one is going to be the twenty first one. It’s a little on the nose though, writing a relaxing review of a game designed to be relaxing.

Osmos; a puzzle game developed by Hemisphere Games as a mobile game primarily and no surprise it’s available on all Andriod and iOS devices, but it is also available on the PC. I don’t know if it was because of my fat fingers or something though, but I preferred playing it on my PC using my mouse, as opposed to using my hand on a tablet.

This game is a good damn work of art. Visually, it’s designed to look quite similar to bacteria being examined through a microscope, but here there is a bit more attention to artistic detail and color consistency. Each of the spheres look like slowly pulsating orbs of different colors and shapes and it’s all very hypnotic. The music is composed to match this hypnotic experience with some of the most relaxing ambient music I have ever heard in any game. The music is so relaxing that it really wouldn’t be strange if you find it getting played in a new age yoga class.

Looking beyond the beauty, the game is quite solid. While it is a puzzler, its primary mechanics are physics and the use of the various forces of motion to actually guide your orbs to success. The game has three main sections; one where all the orbs are sentient, one where centripetal motion is the primary force in the levels and another where the orbs are mostly still with the exception of the players orb which you can push by ejecting a part of your orb in the opposite direction that they want to go. The only consist thing between all of these levels is that the way to win is for the player to absorb smaller orbs, growing larger and larger, until they are pretty much the largest object on the map.

Osmos is a pretty decent game; it looks good, it sounds good, it plays well and it’s a very unique experience. I personally had more stressful moments playing the game as opposed to relaxing ones, but that might just be because of my fat fingers. I still would recommend that you get it though.