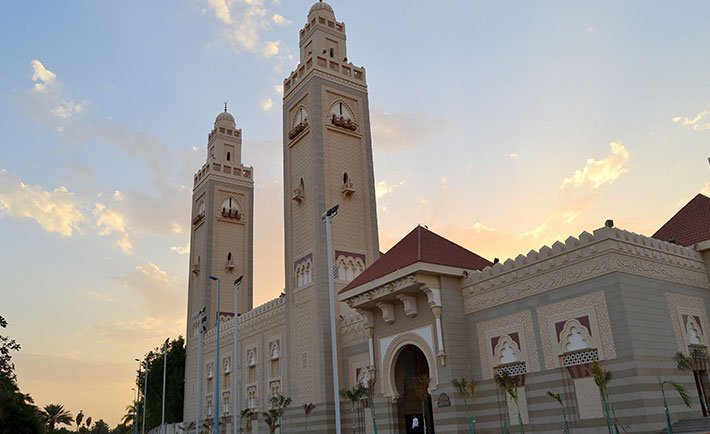 Mosques around the world are well known for the general religious importance to Muslims. But at the same time apart from being a place of worship and spirituality, they also serve another purpose – they are epitomes of Islamic architecture and culture.

With no shortage of stunning mosques in the city, we decided to show you some of the best the city has to offer. From stunning architecture to intricate geometric tiling and calligraphy, a sight of one of these places of worship is sure to take your breath away! So if you haven’t decided where to pray your Eid prayers yet, this list will help you make your decision.

Carrying a striking resemblance to the grandiose mosques of Morocco, the King Fahd mosque with its typical Moroccan architecture is disparate from other mosques in the Kingdom. Immense yet graceful, the tile-work, open-air courtyard and slender minarets of the Mosque continue to fascinate onlookers.

The interior is no less impressive with polished floors, delicately crafted columns and Moorish arches topped with triangular domes. The golden lit interior highlights each of these features leaving visitors mesmerized.

This is Jeddah’s largest mosque and almost everything about it screams size; the mosque covers an area of 9700 m², of which the main prayer hall covers a massive 2464 m². Of the many domes, the largest one has a span of 20 meters and reaches an outstanding height of 42 meters.

Designed by celebrated Egyptian architect Abdel Wahed El-Wakil, the grandeur and undeniable beauty of this white colored mosque is hard to match. The mosque looks best in the day when light shimmers into each of its four barrel-vaulted iwans.

Considered one of the most enduring architectural masterpieces of Jeddah, the Mosque is highly regarded for its dazzling golden dome, multicolored mosaics and calligraphic inscriptions.  In the early morning light, the Enaya Mosque’s detailing is as vibrant as ever. The large mosque which sits right on the shore of the Red Sea is one of the most noticeable features of the Jeddah coastal skyline.

Beneath its large dome (one of the largest in the Middle East) a grand gilded chandelier hangs which gracefully adorns the central portion of the mosque. The artistry on its walls and the intricate turquoise colored tiles that adorn them are majestic.

Stunningly opulent, the floating mosque is undoubtedly one of Jeddah’s cultural symbols. This single domed architectural marvel that sits literally on the sea, symbolizes Jeddah’s bold storm into the modern age.

Its large turquoise dome which resembles the color of the sea has numerous colored glass windows that let light in, illuminating the interiors. Its intricately decorated roof is lit by a massive crystal chandelier and the kaleidoscope-like patterns in the large dome are breathtaking. Sitting on an enviable location, the mosque’s courtyard offers unencumbered views of the Red Sea, making it a popular tourist site.

Its large gilded dome shines in the night sky. This shining mosque is hard for a passerby to go past without noticing. The mosque is almost like a tribute to modern Islamic architecture. While strolling through the Mosque at sunset, you will be washed in shadows by this beautiful mosque.

With brightly lighted interiors, grand chandeliers and an elegant mimbar the mosque is equally pleasing on the inside.

The resplendent white mosque is one of the most beautiful mosques in the older part of Jeddah. Sitting next to a calm lake, the mosque is truly picturesque with its architecturally lucid composition that has an air of grandeur more spectacular than the numerous domes that adorn its roof. It’s almost as if the mosque has accentuated the landscape of the area it sits on.

The mosque contains a highly compartmentalized plan. In it the men’s prayer area, the women’s prayer area, residences for the imam and muezzin, teaching areas, as well as ablution facilities, functionally are all separated from each other, but nonetheless united within an overall rectangular arrangement.

Capped by a dazzling golden mosaic dome, this radiant mosque is a stunning masterpiece of architecture, design and spirituality. While buildings of outstanding scale and importance are aligned on the same street, the mosque manages to show its prowess.

Inside long curtains that stretch from the roof till the floor are one of the most distinct features of this mosque. The shimmering interior of the mosque is very pleasing to the eyes, making it one of the most serene and tranquil places where one could escape the hustle and bustle of the city and just sit and worship.

While not an imposing structure as some of coastal Jeddah’s mosques, but watching the sun dance across its pale cream-colored walls is an experience hard to match. Though not as striking at first sight, one has to get into details to realize the beauty of this one.

Sitting right next to the Prince Sultan’s grand palace, the beautiful mosque gracefully adorns it. Huge windows covered in intricate metalwork allow sunlight to stream in and the low Andalusian chandeliers give worshipers an altogether different experience to pray in. The exquisite mimbar in front justifies the elegant look of the mosque.

Those with any interest in history will be awestruck by this mosque’s beauty and design. Carrying typical elements of Hijazi architecture this remarkable mosque is the perfect tribute to Jeddah’s rich Islamic past.

What is remarkable in this mosque is that it has managed to transform raw, earthly materials into compositions so powerful they evoke something beyond amazing. The intricate latticework on the windows, elegant relief work on the walls and the variegated dome are unparalleled by any other mosque in Jeddah.

Typical mosque elements like the dome, minaret and portico are incrusted in our collective memory as the expression of the Islamic religious building. However there are some mosques that have redefined them again and assembled them in a new way, coherent to contemporary expression and aspirations.

One such mosque is the conical Sayidna Aisha mosque. Its exterior is such that one might not be able to comprehend its purpose at first sight, had its towering minaret not been there. Very modern and truly disparate this mosque truly strikes out from the other mosques Jeddah has to offer. Inside its stalactite-like crystal glass mimbar that is not made in the shape of the regular semi-circle but rather a rectangle, strikes out in a rather plain interior of the conical mosque.