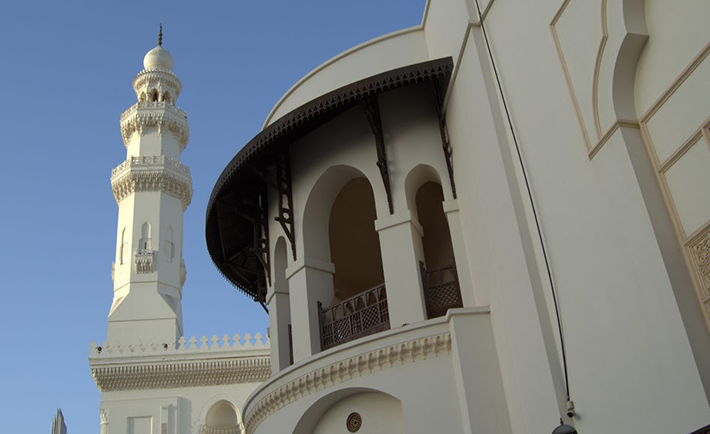 It stands in the middle of Jeddah’s downtown with skyscrapers around it. The architecture of the mosque makes it look a bit out of place, almost as if it wasn’t made considering its surroundings.

Whitewashed like celebrated Egyptian architect El-Wakil’s other mosques, this mosque by him actually looks as if it were a time-honored mosque from Cairo that was magically transported to modern Jeddah. 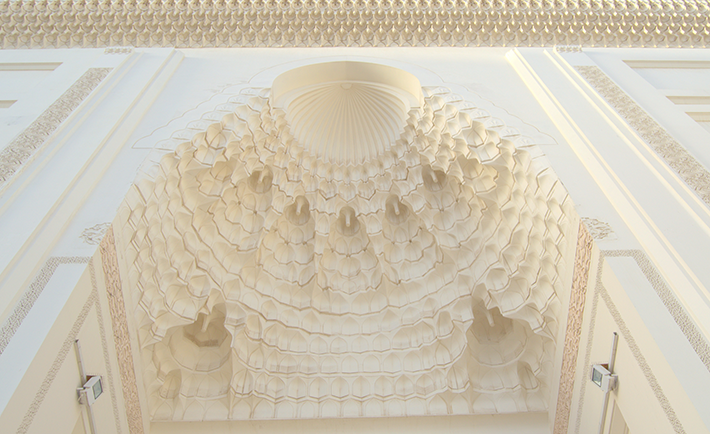 As we reached the mosque we noticed that the mosque’s parking lot is being used by the employees working in one of the fancy tall buildings on Madinah Road, which is the road on which King Saud Mosque occupies a prime spot. 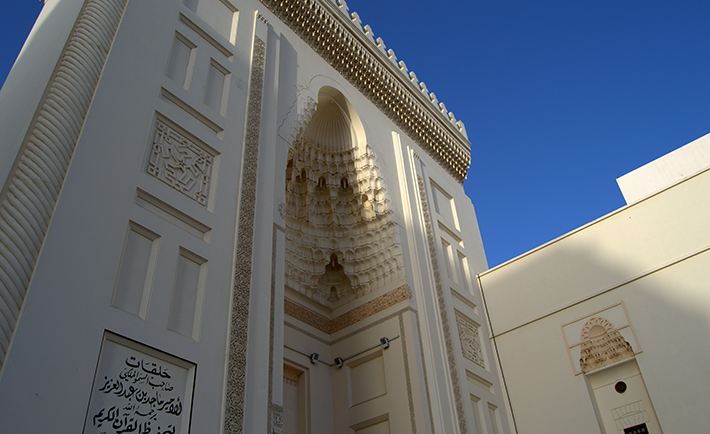 Walking on the portico, we made our way to the main entrance of the mosque. The lofty minaret carries a striking resemblance to the Mosque of Sultan Hassan from El-Wakil’s hometown of Cairo. 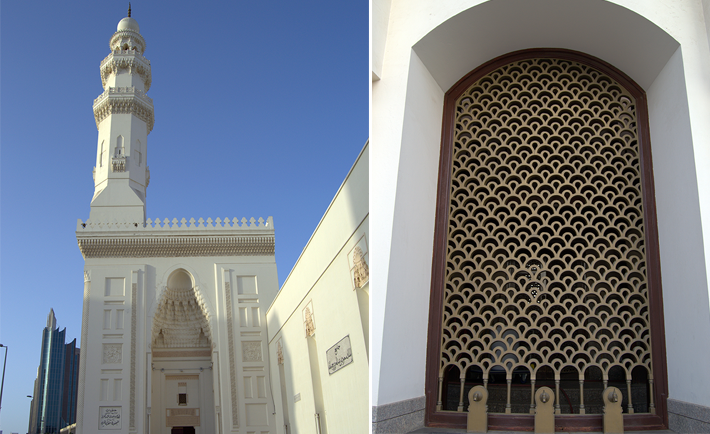 There standing beneath its compelling iwan, the vaulted portal that opens into the mosque, we realized that how different this mosque is compared to the other mosques in the country. Yes, there are El-Wakil’s other mosques like the Quba Mosque or the Qiblatain Mosque in Madinah that are made on a large scale but there is something about this mosque that is different. Almost as if El-Wakil was given the opportunity to build something from scratch rather than work on something that came with deep historical and cultural values and somehow limited him. 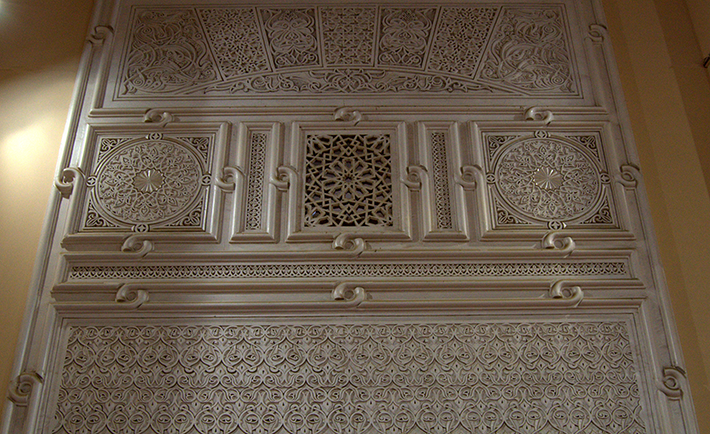 We then strode through the deliberately orchestrated paths that worshippers have to pass before reaching the courtyard. This was most likely done as the plan of the building has been designed so that it aligns with the streets around it and also faces the qiblah. 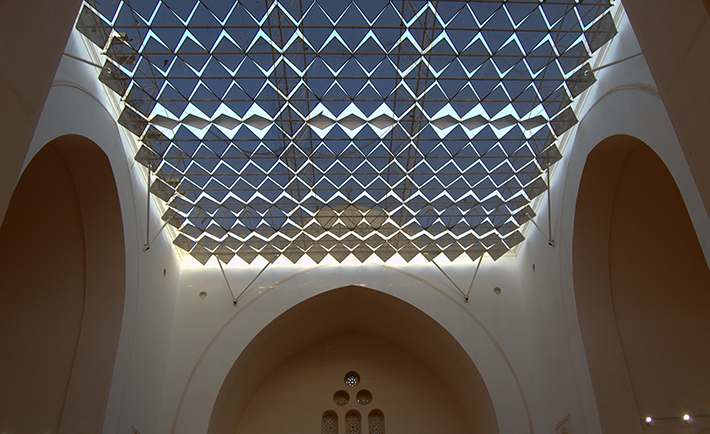 The courtyard is covered with beautiful panels that provide shade to the worshippers. Further ahead is the main prayer hall that has a low hanging chandelier standing from its large dome. The dome is said to have been made with little or no use of cement. For a dome with a diameter of almost 20 meters, we were left perplexed on how the feat was achieved. 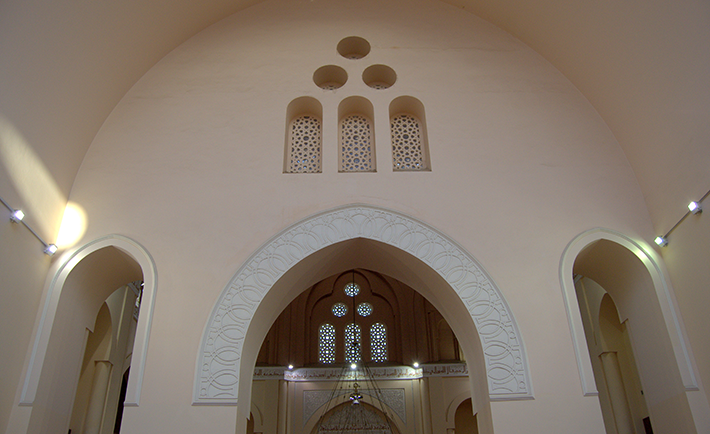 The mosque, in fact, relies on traditional construction techniques and materials heavily and has kept the use of cement to a bare minimum. The mimbar, prayer niche, is rather simple and so are the interiors in general, perhaps so as to not distract the worshipper from his main purpose of visiting the mosque, which is to worship. The lighting in the mosque is also ideal for a mosque environment, being soothing to the eyes, with a combination of natural sunlight and dim light bulbs. 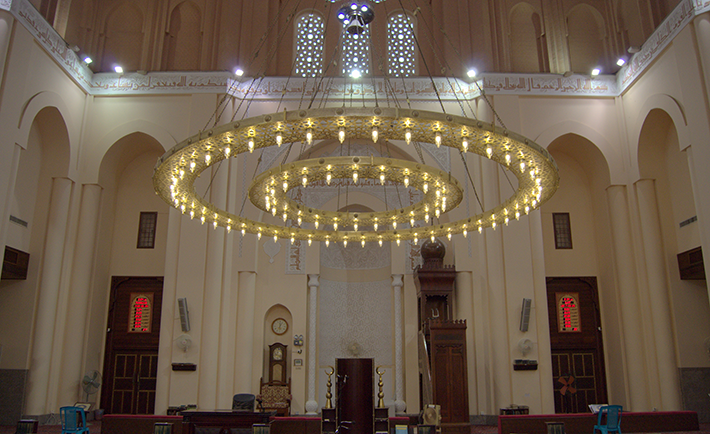 Though it is Jeddah’s biggest mosque covering an area of 9700 sqm, one may not see it be that large, as there are a few other mosques in the city that occupy almost an area similar to that of the King Saud Mosque. 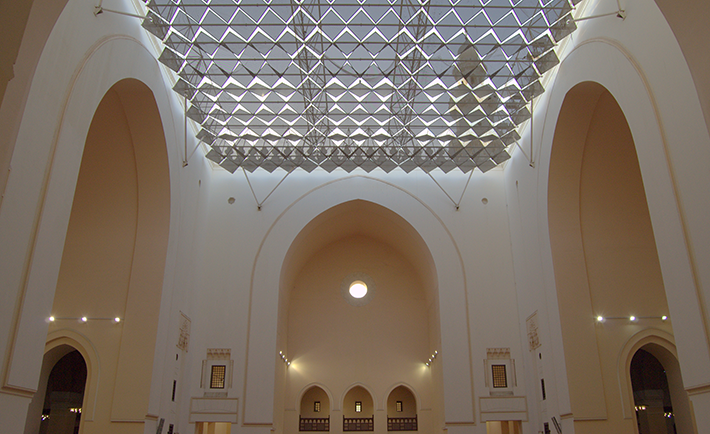 While walking out past the same complex corridors that we came in from, it’s the simplicity that this ‘grand’ mosque evokes that takes center stage. 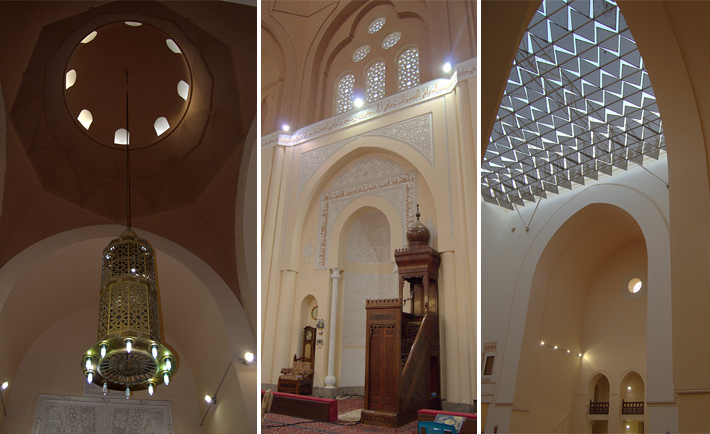 Personally speaking, I would love to see guided tours of the mosque and a bit more information about it in the mosque itself. The King Saud Mosque felt as if it assists in amplifying the overall spiritual experience rather than bombarding worshippers with complex calligraphic scripts, bright lighting or variegated carpets. And, if you happen to be an architecture lover then you’ll almost certainly have a new favorite amongst Jeddah’s mosques.