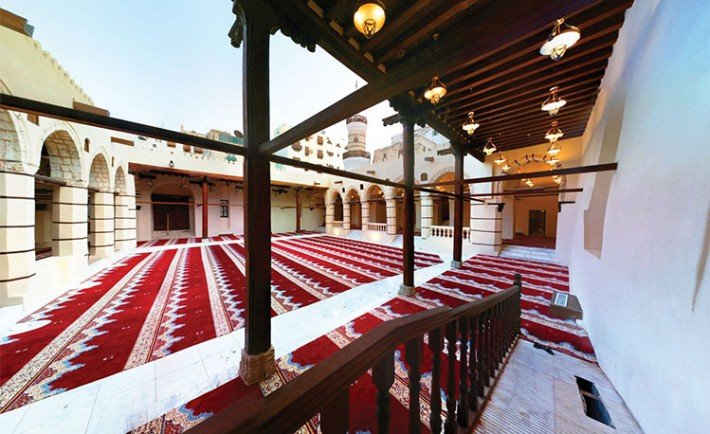 Shafei Mosque reopened to the public.

Parts of the Shafei Mosque date back to the time of the Caliph Umar (RA), making it one of Jeddah’s oldest surviving mosques. After years of meticulous restoration works it was finally opened to the public this year.

The mosque is located within the UNESCO World Heritage Site of Historic Balad in the Mazloom District. Mind you that this place is not accessible via car; one has to walk through the narrow mazelike lanes of Balad. As we walked through them we gave fleeting look to the buildings that lean at perturbing angles, but somehow continue to stand. It wasn’t our first time, so we had kind of become used to seeing them that way.

We did however come across something we’ve never seen in our entire life. A group of South Asian expats were playing their own variant of volleyball. They were using a non-airy ball and instead of using their wrists, they were using their fists to hit the ball. Almost as if they were punching it. It seemed like quite a difficult sport, but they have become pros at it, with rallies continuing for long. There were other teams sitting on the sidelines, waiting for their turn to play against the winners of the match.

We continued walking through the arterial lane of Historic Balad, which lead us straight to the Shafei Mosque. The mosque is one of the rare single storied buildings in Balad. Its exquisite minaret towers on the rear side of the mosque. The minaret is one of the most disparate features of the mosque, its design is heavily influenced by Ayyubid architecture – very few examples of this exist in the entire Middle East. The minaret is over 900 years old.

While Shafei Mosque was being restored over the years, I remember peeking through the windows to see how it was like from the inside. Now was finally the chance for us to see it in all its splendor. We went through an arcade and came across the wooden main door that carried Arabian motifs and convoluted designs. There were some Arabic calligraphy inscriptions on stone panels above the door – we struggled to decipher them. Unlike most mosques in which one has to climb up a flight of stairs, at Shafei one has to descend down a flight of stairs.

The mosque is made in a rectangular shape, with an open patio in its center providing ventilation inside. It has been restored in accordance with UNESCO standards, using much of the same materials that include sea mud, brick, stone and wood.

The architectural style barring the minaret is Fatimid. Much of the structure that stands today dates back to the 13th Century CE, during the reign of King Sulaiman bin Saaduddeen Shahenshah II. The mosque however went through many refurbishment works over the years, with major upkeeps carried out by Khawajah Mohammad Ali, an Indian merchant in 1533.

We first went to see the mihrab. It was daintily carved and had multiple stripes of colors adorning its borders. During the restoration works it was found that there was another mihrab underneath the present one. Gems and precious corals were found along with it.

The prayer area is lined with several pillars that were renovated with lead. The low-hanging gilded chandeliers in between the dark colored pillars give a sense of regality to the place. Despite being well ventilated, we found that the mosque has scads of windows – there purpose is perhaps to add to the esthetic beauty of the mosque

We were there at a time when it was after Asr prayer, so the mosque was completely empty. The earthen construction made the place feel cooler than the outside – no wonder we didn’t see any air conditioners inside.

Through the carpet lined corners we went to the rear side of the mosque – it was on the opposite end of the courtyard, almost like a separate mosque on its own. The roof inside is supported by wooden beams, each almost a meter apart. As there aren’t any chandeliers on the rear side, the roof is in the spotlight here.

Shafei Mosque is a reminiscent of Jeddah’s ancient history as a vital trading center. Its architecture and designs display a wide range of influences from across the Middle East and beyond that the city had. Largely due to the large number of influxes from around the world, which still continues to this day.