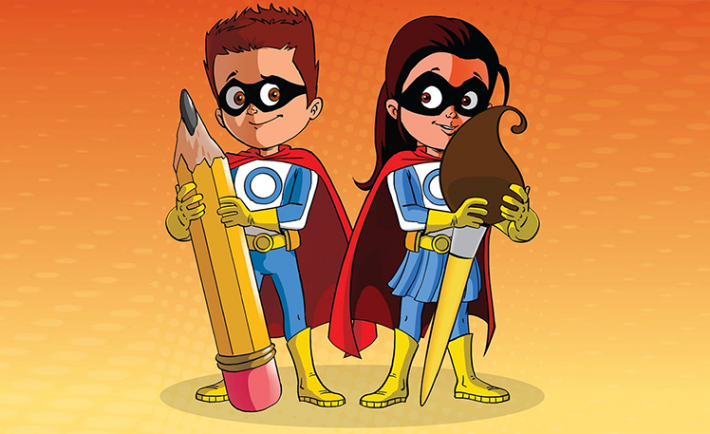 Riyadh-KSA: November, 2018 –  Landmark Arabia, the region’s leading retail and hospitality conglomerate, has launched a nationwide initiative in Saudi Arabia titled ‘Super Kidz’. The initiative aims at encouraging kids to eat healthy and adopt an active lifestyle, through an online creative contest. The contest is set to run throughout the month of November, to mark the diabetes awareness month.

The Super Kidz initiative is part of the Group’s global CSR initiative Beat Diabetes’, to spread awareness about the condition. The initiative encourages people that diabetes can be managed by taking 3 simple steps – Take the Test, Eat Healthy & Get Active. This is the tenth year of the Beat Diabetes initiative and the Group aims to reach out to a large audience with the message of healthy living.

The Super Kidz initiative spreads the message of healthy eating and active lifestyle for kids through two superhero characters – Super Sam and Super Sara. The characts have also been illustrated in two digital comic books that chronicle their adventures including their love for sports, reading, exercising and eating lots of healthy food. In the comics, the Super Kidz are seen to receive their superpowers from their healthy lifestyle habits.

During the initiative, kids will have the chance to participate in an online Super Kidz Creative Contest, which will include a drawing and a creative writing challenge. Children between the ages of 4 and 6 can submit a drawing showcasing ways of eating healthy or getting active, while children between the ages of 7and 10 are invited to submit their original stories in English or Arabic on the same topic of healthy living. The entries will be judged for age appropriate creativity and originality.

The winning drawing and story will be included in the next Super Kidz comic. In addition, the first-place winners from both categories will receive an iPad Pro, while the runners-up will receive an iPad. As a gesture of encouragement from the Landmark Group, every submission will get a certificate of participation.

The World Health Organization recognises childhood obesity as a significant challenge of the 21st century. Globally, in 2016 the number of overweight children under the age of five, is estimated to be over 41 million. The National Centre for Biotechnology Information (NCBI) has also underlined the high prevalence of modifiable risk factors amongst Saudi youth, and further states that if current unhealthy habits are not reversed at a young age, the burden of disease and illness will rise in the future. Recognising the alarming consequences of such findings, Landmark Arabia is committed to taking necessary steps to address and prevent a surge in the incidence of chronic lifestyle conditions.

Landmark Arabia has always believed in the importance of encouraging the community to live healthy and fulfilled lives. As part of this priority, the Super Kidz campaign ensures that children are included in this conversation on good health.

Entries can be submitted via the official SuperKidz website: superkidz.me

Landmark Arabia, Middle East’s leading retail and hospitality conglomerate, was launched in the Kingdom of Saudi Arabia in 1994. Since its inception, the Group and its brands have created exceptional value for communities across the region, with its presence in GCC, Lebanon, North Africa and India.

Landmark Arabia’s retail offerings include more than 10 homegrown brands such as Centrepoint, Babyshop, Shoe Mart, Lifestyle, Splash, Max, Home Centre, Home Box, Shoexpress, Iconic and hospitality brands like Fitness First – all of which are household names in Saudi Arabia. The company also owns three Oasis Malls in the Kingdom. Along with own brands, Landmark Arabia also franchises international brands such as Koton, Reiss, Carpisa and Nandos among other global brands in the region.

Landmark Arabia currently operates over 850 stores spanning more than 11 million sq ft of retail space and employs over 6,800 Saudi employees of whom 66% are Saudi women.

The Group is proud of having one of the largest loyalty programs in the Kingdom with over 10 million customers.