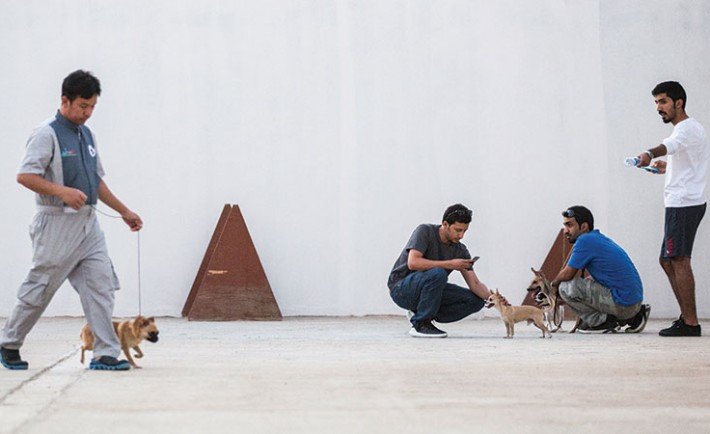 Who is Sarah AlFahaad?
I’m a 29-year-old happily married mother of a 5-year-old child. I was raised on a farm in Thumamah, where I lived with all sorts of animals; cats, mice, chickens, dogs – you name it! Since I was 7 or 8, I‘ve been rescuing animals from the area and bringing them to the farm to care for them.

When was the shelter established?
The center was established two years ago as a nonprofit volunteer project. It is located within a Customs Authority dogs training center, where a clinic was built along with spacious care units to have the animals in.

What kind of animals does the shelter rescue?
We have the capacity to save all kinds of animals, from turtles to birds and more, but we mostly rescue dogs and cats that get abandoned by their owners, they’re the most likely animals to suffer abuse, neglect and desertion. We also do sterilization of stray cats and dogs to prevent random breeding in an area or neighborhood.

What are some of the challenges you face?
Mostly the lack of animal welfare knowledge and compassion towards them. Lots of times people question the neutering procedure and think that it isn’t important, but at the shelter we try to educate people about the lifelong health benefits of spaying or neutering animals; first and foremost to the animals themselves as well as for the community at large.
Another major issue is selling adopted animals! Some people think this is a free deal and then turnaround selling adopted animals to make money out of it. So in order to try and prevent such actions, we increased the age limit of adopting individuals and we request parental approval prior to adoption.

What is the adoption process in Aleef?
When an animal is chosen, we send the adoption forms via email, then we conduct a mini interview with the person who wants to adopt, then a brief about the animal is given by the veterinarian at our clinic, in addition to an orientation session on important things such as how to care for the pet, the necessary medical checkups and vaccination plan. Our adoption service is available all over KSA, not just Riyadh.

How can someone volunteer in the shelter?
Most of our volunteers are online; they help by spreading the word about animals up for adoption. There are no specific standards, everybody is encouraged to volunteer in any way they see fit and I strongly encourage them. Just contact me via text or WhatsApp and we can schedule an interview.

What are your aspirations for the project and animal welfare in the country?
To launch an official governmental institution that falls under the Ministry of Agriculture. I’m hopeful and certain that the government is working towards this as promised by officials.

Parents, please instill mercy and compassion in your children’s hearts towards those helpless creatures. Educate them on how to understand their pet’s behavior before letting them take control over an animal’s life. — Sarah AlFahaad