It is safe to say that this episode is the very episode I solemnly pledged my allegiance to Goerge R.R. Martin and to Game of Thrones cast and staff. Game of Thrones threw a grenade of plot twists in episode 5 like they never did, Eid (definitely not Christmas) came in early this week! 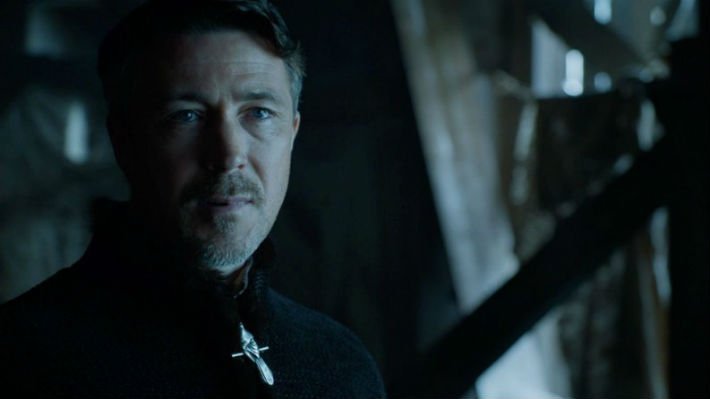 Peter Paelish, with his eternal wittiness and endless plots and sneakiness still impress me every time, go ahead Lord Paelish, destroy our hearts and betray our favorite characters, you’ll always have that soft spot for you in my heart, Kudos for never giving up on playing the Game of Thrones. I’m glad to see Sansa Stark speaking up for herself, yet we still see that Paelish ghost lurking around her distrust for her half-brother, Jon Snow. I’ve discussed it with many other fans, barely any of them shared my concern, but I feel like Sansa Stark won’t always have her brother’s back for long, and she might, naively, make wrong decisions just like the late Catelyn Stark did many atimes, one of which, is trusting Lord Baelish. The fact that she lied to Jon and everyone else about meeting Lord Baelish worries me, and I think Brienne has a point when she says that Sansa doesn’t look like she doesn’t trust him much, and I believe this trust was shaken by Peter Baelish.

I don’t think it’s very reasonable to wash away all the past between Sansa and Jon and they’re suddenly the best siblings, I believe, particularly in Sansa, a little part of her that will always look at Jon as the bastard of Winterfell, and hardly anything else.

Even though Sansa turned out his help to take back the North, I think Baelish will be providing his help one or another, he might even be the turning point in the Battle of Bastards that might happen in episode 9. What movies does he have this time? Only GRRM knows. 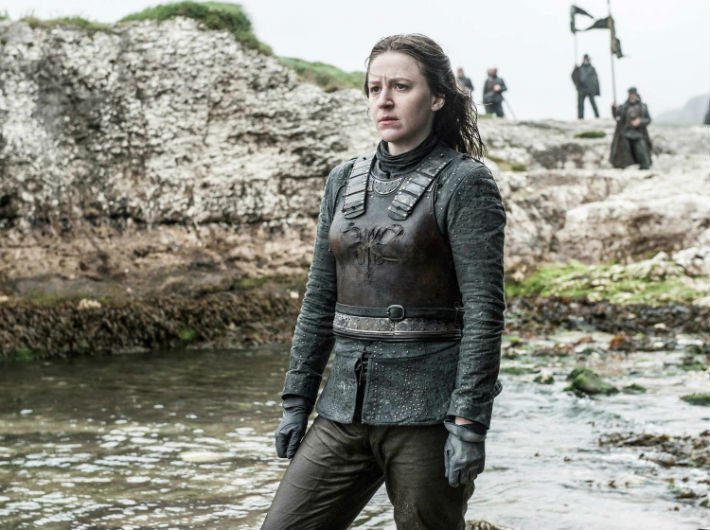 I was hoping for a happy Stark ending, in which Theon Greyjoy rules in the Iron Islands and to back the North against The Boltons, but here I am, failing again at understanding that happy endings aren’t a thing in Game of Thrones. Yet I am very impressed by this major plot twist, linking the Iron Islands to Danaerys Targaryan changes the whole game. Euron Greyjoy doesn’t strike me like a man Danaerys would take for a husband or for a leader, but I must give him the credit, smart idea.

I hope that Yara and Theon are running to beat him for the idea, taking the whole fleet with them is a good place to start, but I don’t think Yara will be giving him the Islands that easy.

We don’t think a girl will give up being a Stark. 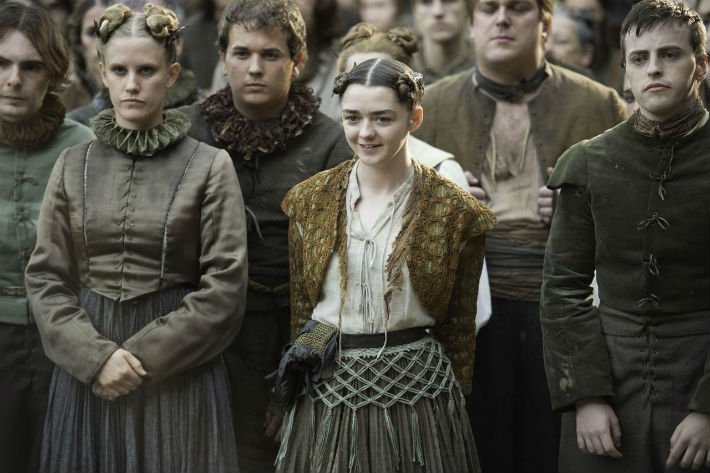 The symbolism in Arya Stark’s scenes are mindblowing.

Arya Stark watches the play where her father is a traitor, Sansa is a foolish girl, Cersei is the sweet mother and queen, Jofferey is the nice little boy king, Robert Baratheon as the fool king and Tyrion Lannister as the vicious little devil. It is all very different then it really was and she can’t do anything or say anything about it, she is just there to kill the actress, because someone paid her squad to do it.

Arya Stark is again resembling herself, as she watches with the crowd her father’s head being chopped off, and she is there not being able to do anything about it. She gets reminded of the whole reason she is here, of everything that’s happened to her and her father’s memory, while she is here running errands to kill someone who is sweet and gentle, steering away from the real goal.

Sucks to have your own creation turning on you, doesn’t it? 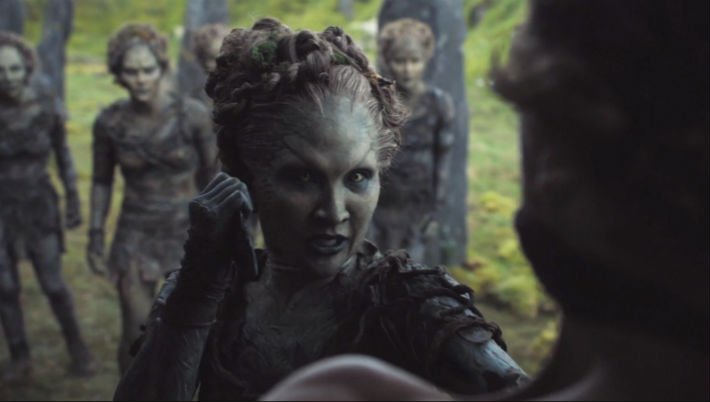 Seriously, Children of The Forest? You made that White Walker guy in the first place? How smart, way to go girls, way to go…

Again, Kudos to GRRM for great plot twists. Looks like the Children of The Forest made the first White Walker out of Human to wipe out all Humans, and ended up being wiped out by White Walkers themselves. It makes you think, truly, if we are to hate on the White Walkers for simply trying to live up what they were created for, wipe out all humanity of Westeros and the world.

What created the White Walkers, is the only thing that could kill them, which as shown in the episode was Dragonglass and Valaryan Steel. I can only think of one thing ending the White Walkers and that being: DRAGONS. I can’t help but remember back in season 4 when Bran was told that he won’t be able to walk again, but he will fly. I mean, definitely he won’t fly on an airplane or a charter, so, you’re thinking of what I’m thinking?

One of the things I really love about the show is how GRRM continuously resembles our human weakness in front of almost everything else, including ourselves, and presumably our own creations. The things we create to have a better living end up massively destroying us on short terms and long terms, that includes mass destruction weapons, the global warming, and every day technology.

The new red priestess? How old are you really, woman?

I have to say, I miss Mel. I feel truly sorry for her, after she’d save Jon Snow, she has no appearance whatsoever on the show, and everyone seems to bully her over her failed plan and projects on Stannis. But guys, can you overlook that and just see how she resurrected Jon Snow? Can you stop being so mean to her?

Tyrion Lannister and politics, I’d wish there would be a course in college teaching his techniques of crystallising public opinion. However, I think by the end of the season we’re ought to see a bigger plot twist regarding Tyrion Lannister, probably him riding one of the dragons? I think there’s more to him living in Mereen than just consulting the queen.

I truly wish for a flashback on what happened with Varys that night with the sorcerer, on what he heard in the flames, and why was it mentioned in that episode. I think going down this season, we’ll be seeing the behind story for both Varys and Baelish.

Not all heroes wear capes, some of them just hold doors

If you didn’t cry during this scene then you definitely need your humanity checked. I am just in love with the intelligence behind Brandon Stark character. Bran can travel in time, space, change the past while in the future to form events that suit the future but might probably mess up with the past. I don’t know how to put this but the thing is, I don’t completely understand his abilities yet, the ultimate question I had for this scene is what happened first? The future or the past? Which caused which, the future or the past? Hodor would’ve stayed Wylis, if it weren’t for Meera calling out for him through Bran, and Meera wouldn’t have called for him if Wylis wasn’t Hodor in the first place.

Bran’s abilities are continuously growing more interesting, he’s officially became the Three-Eyed Raven, he has no control or full knowledge of his mission or what he should do, and Summer and Hodor are no longer with him.

I have to give Meera credit for the whole episode, if it weren’t for her, none of this would’ve been possible, she slit her own brother’s throat, left her own town, followed Bran into his daydreams and she started carrying Bran from the moment Hodor held the door. We love you, Meera.

I can’t wait to see what visions Bran had that changed the course of the past or the future, and to see the extent of his powers and how he’ll be able to stand against the White Walkers.