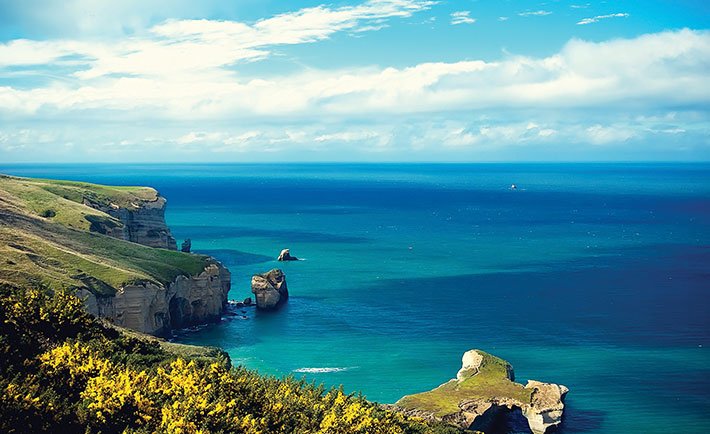 With the travel season coming up, the question rises, are you going to fall back on old favorites like London? Or do you fancy somewhere different and unexpected in 2015? Why not join us as we gate crash anniversary celebrations in the heart of Europe? Or embark on a breathtaking walk through “Middle Earth” in Kiwi land?

If 2015 is gonna be a year where you’re counting the halalahs then head for our budget destination and explore ancient Indian ruins and secret beaches.

If that’s not your cup of tea, then make this the year to go island hopping in the Sulu Sea or maybe it’s time to finally take your significant other on that romantic city break you’ve been promising. Whatever your plans for 2015, Travel Trends has it covered in our Super Seven destinations, so don’t make a single reservation until you’ve read it – between us, we’ll make 2015 your most memorable year of travel yet.

1. Karnataka, India – Beaches And History On The Cheap

Most of India feels cheap to the average traveler, but it’s the combination of evocative ancient temples and sun-kissed beaches all on a real shoestring that makes Karnataka Travel Trends top budget destination for 2015.

The splendidly chaotic capitals of Bangalore and Mysore not only sit surrounded by tropical jungles that are home to tigers, monkeys and Asia’s largest population of elephants, but a four star hotel here will cost only SR 125 a night and a sit-down meal for two at a midrange restaurant is a mere SR 30.

Then there are the beaches of Gokarna, where the sand is as soft and silky as those in Goa but without the overzealous parties in the background. For history buffs, a hike into the northern interior will reveal stunning Islamic ruins like the romantic Ibrahim Rouza in the Bijapur Fort.

There’s lots to see and do in this highly celebrated, cultural and intellectual capital of old Europe and getting there becomes a whole lot easier in 2015 with the completion of the Wien Hauptbahnhof station.

One of the must-dos is to take a walk down the city’s famous Ringstrasse, built in 1865. It’s a bold, grand and scarily expensive facelift that completely altered the look of this marvelous city. This year will see the Ringstrasse become 150 years old and even to celebrate special exhibitions, events and speeches have been lined up.

Around the corner there is an even grander celebration as the oldest University in the  German world turns 650 this year. Walking through the hallowed halls of the University of Vienna is like tracking the marvels of western academia for the past six centuries. A guided tour of the faculties, libraries and gothic arcades will lead you through the achievements of at least 15 Nobel Prize winners – who are amongst the alumni – as well as the efforts of one Sigmund Freud.

That is all before Travel Trends reminds you this is the city once home to Mozart, Haydn, Schubert, and Beethoven no less – four of the greatest masters of European classical music!

With the final installment of the Hobbit series out this year, New Zealand, the inspiration for Middle Earth is set to top many people’s list of 2015 travel destinations.
So as the crowds all head for Hobbiton (the set constructed by director Peter Jackson on Alexander Farm, North Island), Travel Trends suggests something a little more adventurous to really make the most of this stunning country — by doing the Milford Track, New Zealand’s most famous hiking trail.

Walk across Tomb Raider style suspension bridges and carefully placed boardwalks as you take in spectacular mountain views inside the stunning Fiordland National Park.
The 53.3-km route will take around four days to complete, starting at the head of glorious Lake Te Anau and ending at the nation’s highest waterfall, the cooling mist of Sutherland Falls. As great lovers of the outdoors, the Kiwis have installed outstanding facilities.

This little former Soviet republic is packed full of delightful surprises you just don’t associate with a Russian satellite and 2015 is the perfect year to give it the once over.

This year Lithuania becomes the newest member of the Eurozone and finally joins the European family, making travel around the Baltic nation simpler than it’s ever been.

Head south with your bucket and spade for the golden, sandy, endless beaches of the Curonian Spit as it reaches for Russia’s Kaliningrad Oblast, behind which sit Europe’s largest moving sand dunes.

From the beach you can head for Baroque in the capital city Vilnius where echoes of Prague abound through the beautiful architecture of one of the largest old towns in northern Europe.

The Philippines will finally stand on its own   two feet after a year-long recovery from the devastation of Typhoon Haiyan. Now more good news is on the horizon with rapid progress being made between the government and the Moro Islamic Liberation Front, who are active in the country’s south and finally want peace.

The country’s potential stability will make for the perfect setting to explore what is easily the finest archipelago in South Asia boasting a phenomenal 7,100 islands. Set in and around the Sulu Sea all of them are like the very definition of idyllic, dreamy Tropical Island. Surrounded by stunning coral reefs off shores of sandy white beaches dotted with thatched huts, the only thing they’re missing is you lounging in a hammock under the palm trees.

Boasting the largest number of Art Nouveau buildings anywhere in the world, Riga has a wonderful combination of old world charm and new world innovation oozing through its streets.

Once described as the Paris of the North, Riga is an ideal city break for love struck couples who want to walk hand in hand through the winding cobbled streets of its quaint old town beneath beautiful buildings that whisk you back to a romantic medieval yesteryear – look out for the Vinariuos Civitatis which claims to have been around since 1293!

A parade of Ford Model Ts will be among the highlights planned to celebrate the 100th year anniversary of the Rocky Mountain National Park in Colorado, USA. The park is perfect for gentle treks alongside icy rivers that are overflowing with trout and boast woodland so high up that only the constant oxygen emissions from the forests of Douglas firs keeps the altitude sickness at bay. 2015 will also see art exhibitions, speeches, concerts and other mountain-themed activities in full swing throughout the park to celebrate its birthday.

So which place have you decided to go this year, let us know in the comments below?