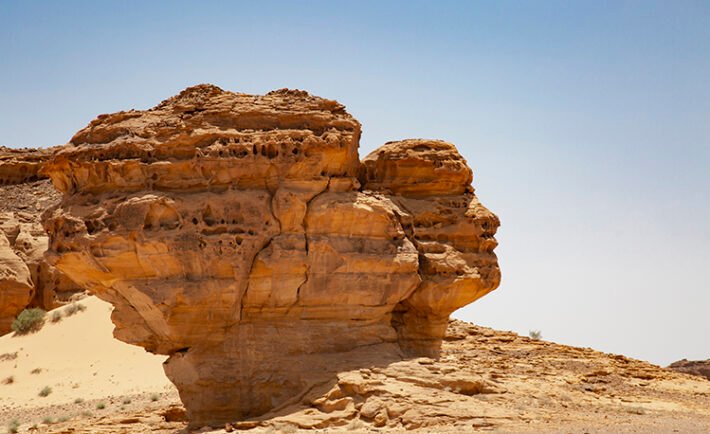 THE MOST INCREDIBLE NATURAL ROCK AND GEOGRAPHICAL FORMATIONS IN ALULA

AlUla, the city that lies in the northwest of the Kingdom of Saudi Arabia, is a place of exceptional natural beauty and deep history, a home to a wide range of flora, fauna and human communities for thousands of years. Centered around its famed oasis and framed by sandstone mountains, AlUla’s geography, environment and climate have enabled human communities to flourish here.

AlUla is a unique and extraordinary landscape because of the three distinct geological eras packed together in one region.

The earliest of the geologic ages which formed the rocks of AlUla was during the Precambrian Arabian shield rocks, which are marked by different layers of sedimentary rock. Laid down over millions of years, these rock layers contain a permanent record of the Earth’s past, including the fossilised remains of plants and animals buried when the sediments were formed.

Second, the area’s underlying sandstone was created during the Cambrian period over 485 million years ago, and tectonic activity has helped further shape its dramatic geology, creating volcanic landscapes, basalt plateaus and sandstone massifs. These geological features enable the area to act as a water catchment basin with an area of nearly 700 square kilometres, allowing the valley to flow southwards towards AlUla’s settlements. Trilobite trace fossils discovered in AlUla’s sandstone date to at least 252 million years ago and provide evidence of some of the earliest life in the area. The soft and porous rock, perfect for carving, also acts as an aquifer that can store the vital fresh water resources required to sustain life in an arid environment.

Following that was the black basalt layer formed by volcanic eruptions creates the dramatic plateaus called the Harrat.

The desert of AlUla is famous for its several geological rock formations, formed over millions of years by the hands of the best sculptors, the wind and the water, to form natural shapes untouched by human hands, and to become exceptional natural shapes that are unseen except in this vast natural desert. With the contrasts of these colours and the lush green oasis running through the middle, it makes AlUla like no other place on earth.

Here are the nine most incredible natural rock formations in AlUla: 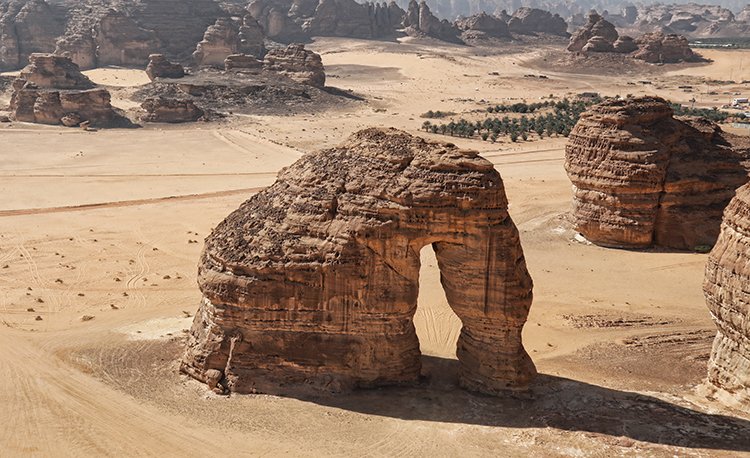 The Elephant Rock is one of the world’s most popular rocks and the highlight of the region of AlUla. Looking at it from afar, this rocks seems like an elephant with a ground-bound trunk. The Elephant Rock is also known as Jabal-AlFil in the Arabic language. Standing at a height of 52 meters, the giant rock climbs three stories into the Arabian sky.

This mammoth stands out among the other hand-carved, ornate structures of nearby Hegra’s Nabataean tombs as it was shaped by natural forces. The trunk and body of this red sandstone beast were shaped through water and wind erosion that was caused over millions of years.

The huge elephant stands in a landscape of golden sands, surrounded by other rocky formations which are equally impressive in size. Regardless, the Elephant Rock still overshadows all that falls in its sight and acts as a reminder of the sands of time. The beauty of this mighty elephant increases at nightfall where it becomes more lifelike in the warm lights that have been installed at the site. Visiting the rock at night is advantageous to avoid the hot weather during the summer day. 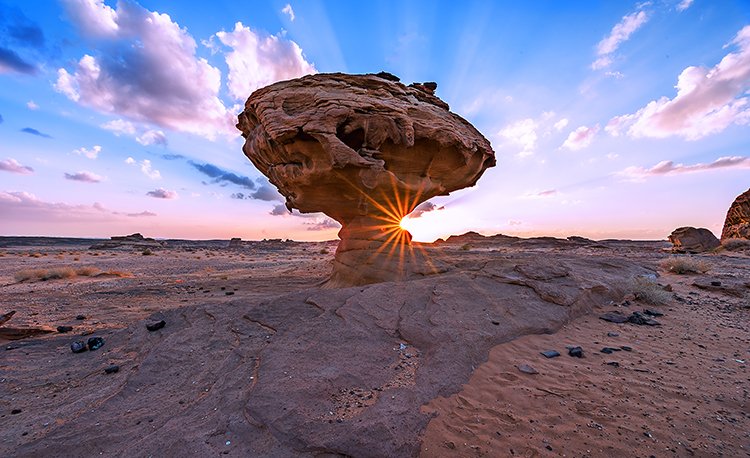 You can find several Mushroom-shaped rocks in the deserts of AlUla. The most famous is located in Sharaan Nature Reserve.

mushroom rocks are a wonderful natural phenomenon usually formed as a result of the erosion of sedimentary layers over millions of years. The remaining part of these layers is exposed again to wind, resulting in the lower parts of the layer breaking down more quickly.

The Sharaan Nature Reserve itself consists of 1,500 square kilometres (579 square miles) of soaring red-rock canyons, sprawling desert and valleys carpeted in delicate wildflowers offer a treasure trove of natural wonders. The mission of Sharaan Nature Reserve is to restore, protect and conserve the sensitive ecosystem native to AlUla. Efforts are currently underway to restore the area, allowing for its natural inhabitants to reclaim the land. 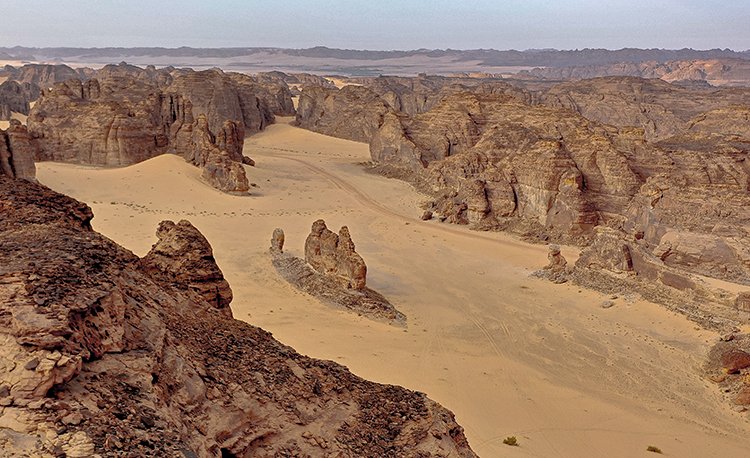 this Desert Fish was recently gone viral on social media through a photo taken by the photographer Khaled AlEnazi, as he spotted a rock in the form of a fish in the desert sands and transformed through millions of years ago into one of the most important ancient archaeological inscriptions and strange rock formations that marks the lands of AlUla. 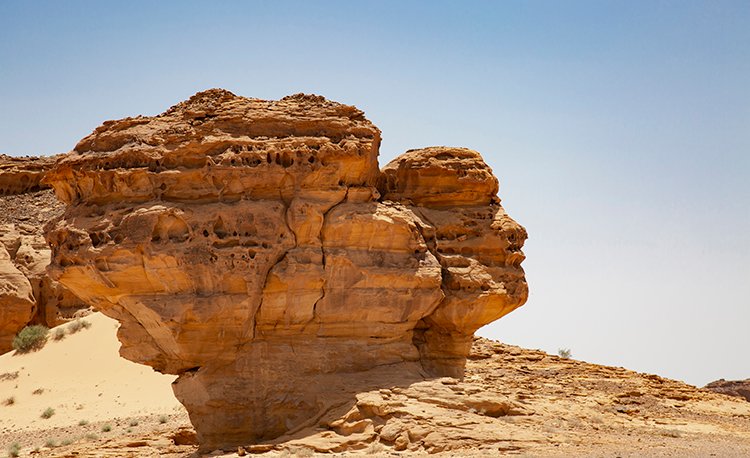 Amongst the monumental tombs of Hegra, next to Jabal AlAhmar (Which means The Red Mountain due to the colour of its rocks), you will notice a formation that resembles the profile of a human head gazing out over the desert landscape. As with all of AlUla’s rock formations, sunrise and sunset are prime times to visit, when the light plays on the sandstone, seeming to illuminate the rocks from within — a magical sight for observers and photographers alike. 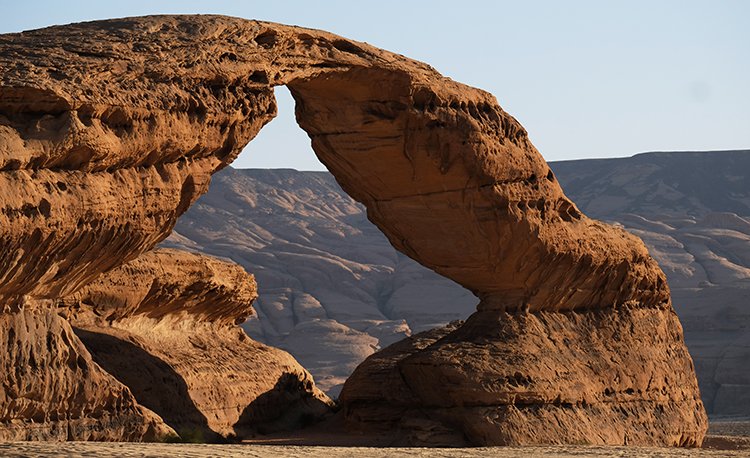 One of AlUla’s most recognisable rock formations, The Arch (also known as Rainbow Rock) is well worth the 90-minute drive from the centre of the city. Its bridge-shaped structure, which resembles a rainbow flanked by two clouds, is a rare sight indeed. Enthrall by this sprawling display of sandstone, don’t miss spotting semi-precious desert diamonds on-site. You can eye these multi-coloured pieces of quartz embedded in the rock itself and scattered on the surrounding ground. 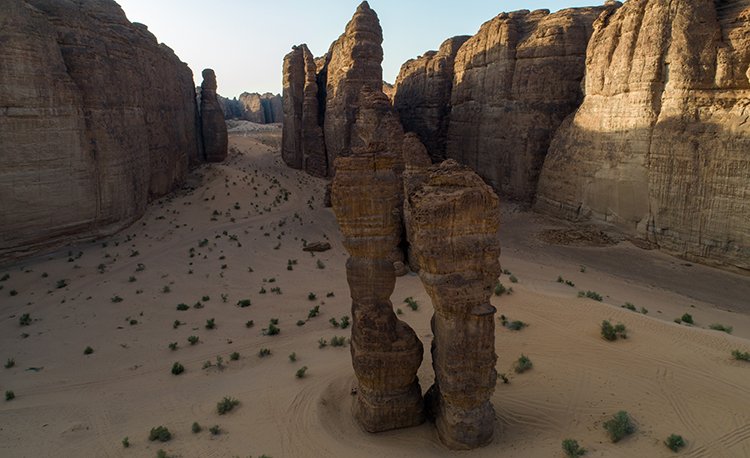 The Dancing Rocks are so-called because these formations are sculpted by nature to appear as if they are swaying in unison. Located in the Raggasat Valley, the rocks seem to dance together, slightly removed from the surrounding rock formations. This place is famous for hiking activities and dune buggies experience. Reach Dancing Rocks in 45 minutes from the city centre, while hiring a four-wheel-drive vehicle with an experienced driver is recommended. 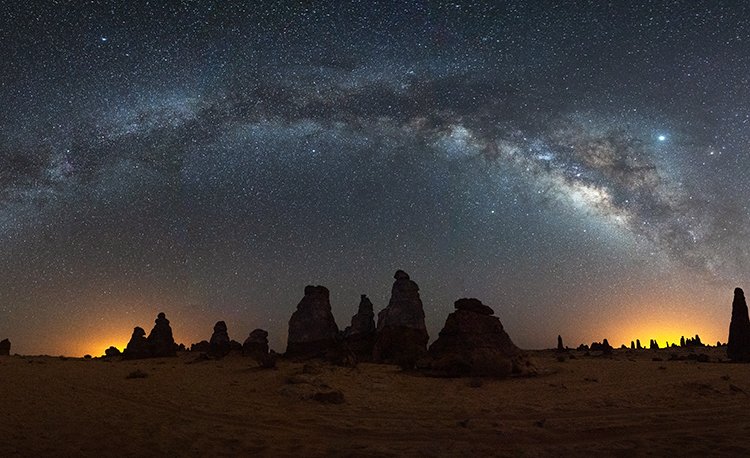 About an hour outside of the city centre, discover dark, thin pillars of stone stretching up to the sky. This is Gharameel. You’ll need to go off-road to reach the site, so we recommend hiring a four-wheel-drive vehicle with an experienced driver. Your reward is a view unlike any other, made even more dramatic at night when AlUla’s dark skies showcase a brilliant display of stars above the rocks. Stargazing packages welcome you to gaze at Gharameel’s stone pillars and follow their spires upward toward the twinkling stars. 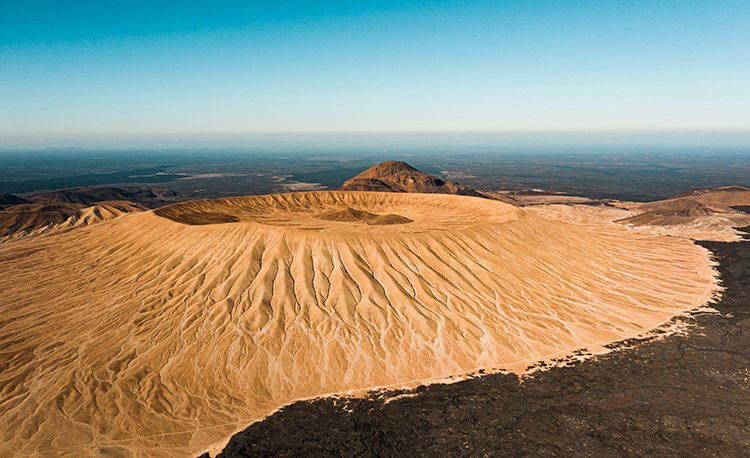 At the remote desert areas of AlUla, find stark, black volcanic rock and inactive volcanoes which stand atop sandstone and are surrounded by seas of golden sand to make for truly dramatic, other-worldly sights. Some of those areas are visitor friendly with guides to experience the hiking around the top of a volcano. Khaybar, the neighbouring Oasis in the south of AlUla is well known for its two famous; The White Volcano and the Black Volcano. 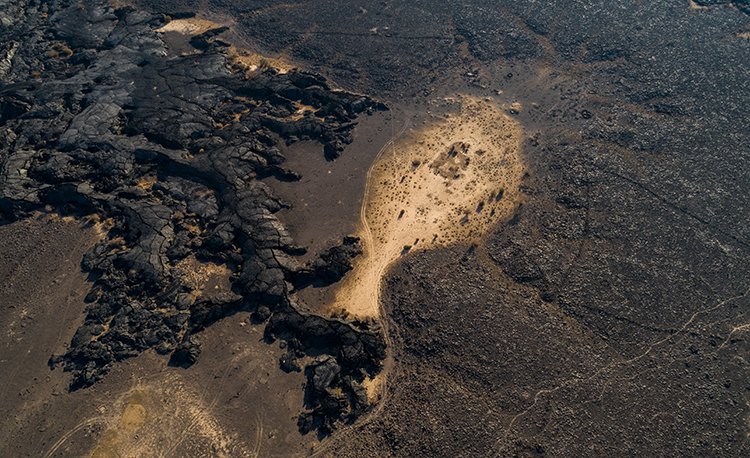 The earliest human activity is evidenced in AlUla in Harrat Uwayrid and elsewhere in northwestern Saudi Arabia in Harrat Khaybar. These important volcanic areas comprise two of the largest in Saudi Arabia. Harrat Khaybar includes a spectacular 100-kilometre long vent system containing lava domes, tuff rings, basaltic cones and the Jabal Qidr stratovolcano. The dramatic lava flows of volcanic events can be seen across the region. Harrat Khaybar has at least seven post-Neolithic (less than 4,500 years old) and eight historical (less than 1,500 years old) lava flows. The last eruption in the Harrat Uwayrid is believed to have occurred around 640 CE. According to Bedouin legends, the explosion erupted fire and stones, killing herdsmen and their animals. The best way to see these formation is by taking a helicopter tour to see the incredible formation from a panoramic sky view.