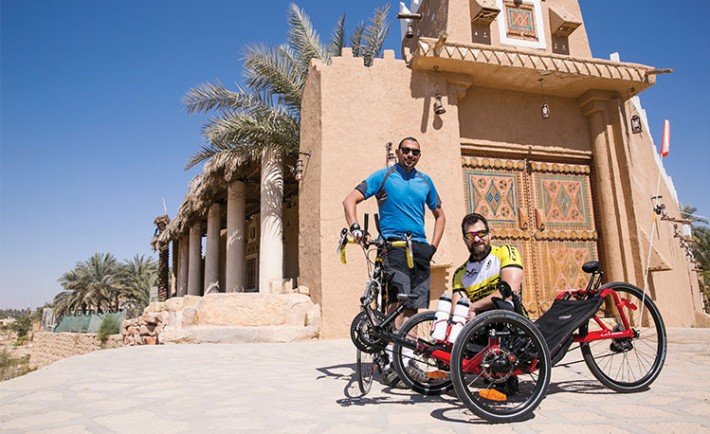 Two men, three days and 462 kilometers worth of meditation, discovery and love of cycling.

Khalil Nebulsi and Amr Madani are colleagues whose love for biking has sparked an interesting tandem that casts away the excuses people have about not having anything to do in Riyadh and being too busy to have fun.

Both men are professionally accomplished in their own right. Khalil Nebulsi is a media consultant for the King Abdulaziz City for Science and Technology. He is a filmmaker by profession and has worked on several short films and documentaries both in Saudi Arabia and the region. Amr Madani, on the other hand, is the co-founder and CEO of National Talents Co.“TalentS” and Executive Director of Mishkat Interactive Center for Atomic & Renewable Energy. His great work in the field of STEM has been duly recognized by institutions and various media outlets. 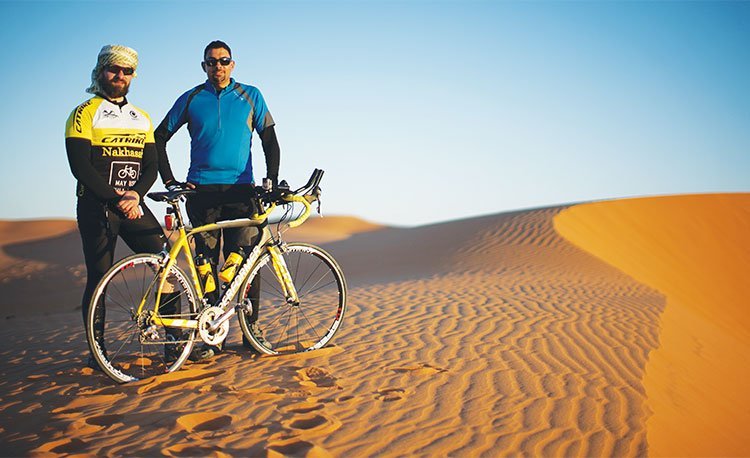 Hence, make no mistake, these two are busybodies. In fact, the two were first colleagues before discovering their shared passion for bike riding.

The two started to ride with Darajati (My Bicycle), a group that cycles on lengthy routes around the city. It had a lot of beginners as riders, and they would usually cover 30 kilometers on an average.

Eventually, Nebulsi and Madani began enjoying longer trips, they would do 50 kilometers to a 100 on a good weekend morning. The two love taking their ride at the crack of dawn, right after fajr. “The weather is perfect, you have the roads all to yourself. You get to really take in the nature.”

When we asked them what their favorite bicycling areas in Riyadh are, Nebulsi replied, “Wadi Hanifah as well as Dhiriyah are just breathtaking. There’s so much you can experience, especially if you just take the time to really listen to what’s going on around you.” The two don’t wear earphones or listen to music during their rides, they prefer to relish the silence, enjoy a conversation and the sights and sounds of the trail.

We really enjoy long journeys. It takes the stresses of the week and it gives you a sense of perspective. It almost has this meditative effect on you. And this is why we decided to push ourselves to go farther; we wanted to promote the culture of cycling. It’s good for you mind, body and soul.Khalil Nebulsi

And so it was that the two decided to embark on a bicycle trip from Riyadh to Qassim. They formed a team called Fajryat,

stemming from love of after fajr rides. The team has other riders too but for this particular trip, Nebulsi and Madani were the ones with enough experience and mileage on their pedals.

“Qassim was the destination we chose because it was not too far from Riyadh but also we didn’t have to use the highway. In fact, we wanted and took the old roads, the ones that travelers went through in the past. We wanted to discover traditional places and villages on our way, our final stop being Unayzah.” 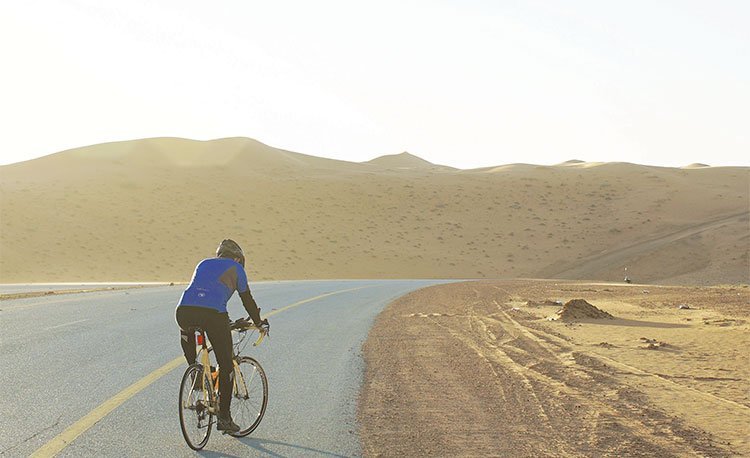 Indeed, these nomads on bikes were able to meet wonderful people who made their experience richer. One particular town they spoke fondly of was AlQassab, where the locals welcomed them with dates and coffee. It was reminiscent of the bygone eras, when every Saudi had their doors open for anyone who passes their home.

Upon their arrival at Unayzah, the bikers and their team, who rode in an SUV in front of the two throughout the journey felt a sense of accomplishment. They took the time to visit a museum where historical artifacts including the first biking license plate in the country can be found. Afterwards, Nebulsi quips, “we ate Al Baik.”

The Riyadh-Qassim is only the beginning for Fajryat. Their next goal is to ride from Riyadh to Doha, a feat they want to achieve in the next couple of months.

Fajryat is a proof that if you put your mind into it and carve time in your day to do something you love, you can. These men are able to balance their careers, maintain their relationships and wake up at sunrise to pursue their passions.

So really, what’s your excuse?