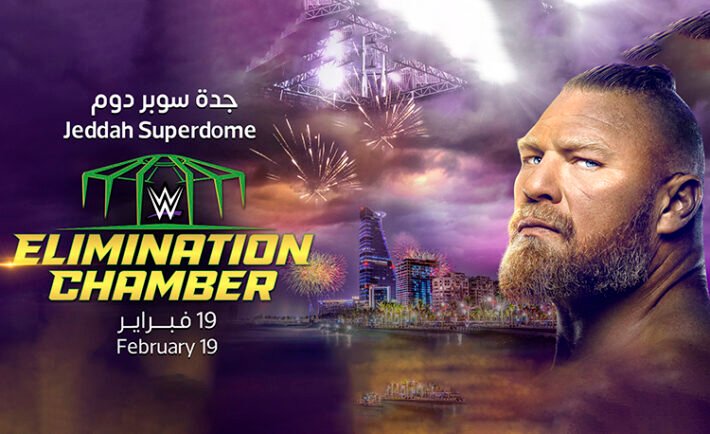 The General Entertainment Authority, in cooperation with WWE.

The General Entertainment Authority, in cooperation with WWE, has announced that tickets for Elimination Chamber are on sale now via the following link:

Elimination Chamber will be held at the “Jeddah Superdome”, the world’s largest pillarless Superdome, on Saturday, February 19, 2022, at 8.00 pm AST.

The show will feature “The All-Mighty” WWE Champion Bobby Lashley who will defend his title against “The Beast” Brock Lesnar, Riddle, Austin Theory, AJ Styles, and Seth “Freakin” Rollins inside the career-altering Elimination Chamber. The Elimination Chamber Match will begin with two Superstars in the ring and four other competitors enclosed in their respective pods. Every five minutes, a pod door will open, allowing another competitor to join the contest. This process will continue until all pods are empty. When a Superstar is pinned or submitted, that Superstar is eliminated and must exit the Chamber. The last Superstar remaining will be the WWE Champion.

Also announced for Elimination Chamber, Becky Lynch will undertake an extreme challenge when she attempts to retain the Raw Women’s Championship against WWE Hall of Famer Lita.

Details on additional matches and regional broadcast information will be announced in the coming weeks. For more information visit www.wwe.com.