It is beginning to become increasingly annoying that Ramsay Bolton still breathes air. He is so good at being evil, I worry if he leaves the show, what kind of evil would replace him?

Winterfell is mine, bastard, come and see. It started to create a some kind of mantra, come and see, and this character is very intriguing in a way that you just hate to love him. I mean, is he to be blamed? Have you seen how huge the north is? Can one truly stand a chance at not wishing that they’d own that land and control its troops and families? Power is such a tempting thing, once you live with it, one grips on it with nails and teeth, it is impossible to simply let go. Once you see how your power can take you places, how the things you do to people pass unasked about, you become increasingly aware of the unlimited spaces that power can take you to. I hope we see the end of these spaces in season 6.

I have always loved how realistic Game of Thrones is, how it explains the human behaviour and how it progresses through events, and so much power is only led by so much breakdown, because fate gives only so many chances, just to leave you fall of the cliff when you start believing that the rules of life just simply don’t apply to you, that you are too great or too large to be broken. Game of Thrones never stops impressing us with the foreshadowing work and all the hidden messages and symbolism it has. And I remember before Ramsay killed his father, I think we probably now know how Ramsay is going to die, as his father said “If you acquire a reputation as a mad dog, you’ll be treated as a mad dog. Taken out back and slaughtered as pig feed.”

I could hear Beyonce’s Who Run The World in the background throughout the whole song. Women in this episode killed it and absolutely ran the show.

Sansa Stark, from porcelain, to ivory, to steel. This season is where Sansa Stark finally transforms to her latest version; steel. It is hard not to feel strong when you have Brienne of Tarth by your side, the women killed half a dozen of good men who serve the mad dog. If you didn’t shed a few tears for the Stark reunion, you must have your humanity checked. That scene was heartbreaking and touching, but what was exciting is the idea of Sansa Stark shaking up her brother to go and regain the North. I just loved that going back home was her idea, while Jon Snow was down and done fighting. I expected Jon Snow to return back darker, kind of less kind and more assertive, however I like how it turned out to be, Jon Snow is grim as ever, but absolutely more careless about the fate of the world, since nothingness is what lies after death.

Yara Greyjoy for queen! Just as much as I have zero interest in what is happening in the Iron Islands, I am absolutely in love with Yara’s personality. She is loyal and she has love for her lands, I kind of feel like she has a lot in common with Jon Snow. Very kind, very loyal, very strong and very worthy, but not everyone around her truly believes in that, they see her as a woman and nothing but a woman. Finally comes the brother, whom she can blame for whatever happened in the Iron ISlands, but who absolutely believes in her and is willing to give up the Salt Throne because he knows what she is and what she’s made of. I loved the scene where she was urging him to man up and stop crying. Women. In. Power. AGAIN. At some point, I actually thought that Margeary Tyrell is going to become a believer just like Lancel did. LLittle did I know, this girl is wicked and she is definitely the Queen of Thorns granddaughter. I was truly impressed by her act in front of the High Sparrow, when she was all the very interested in his talk about his redemption story, but she was still the Queen we knew when she went to her brother, and urged him to be strong, as strong as she is. It was intriguing to see the strong knight giving it all up, all weak and fallen apart, while the pretty little rose is holding up, and is still playing the Game of Thrones. 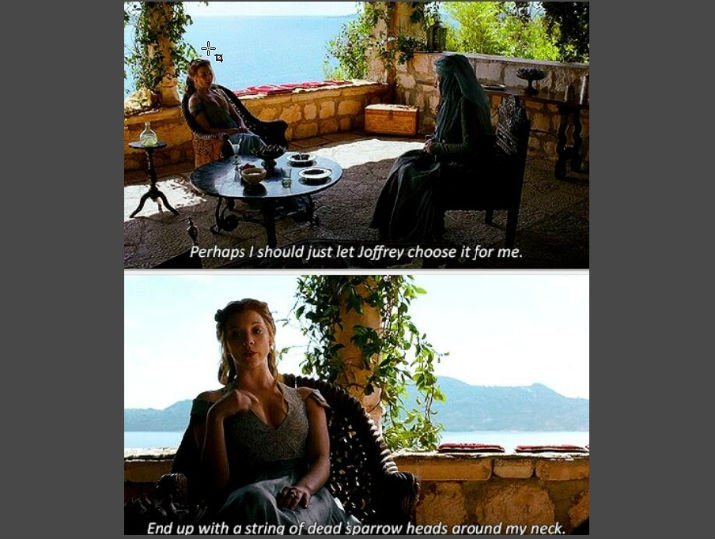 Could this image be another foreshadowing? The books of A Song of Ice of Fire are huge, and I believe everything taken from them is something absolutely worth taking. I’m starting to believe every word said in this show should have meaning, and this joke shouldn’t go unnoticed. 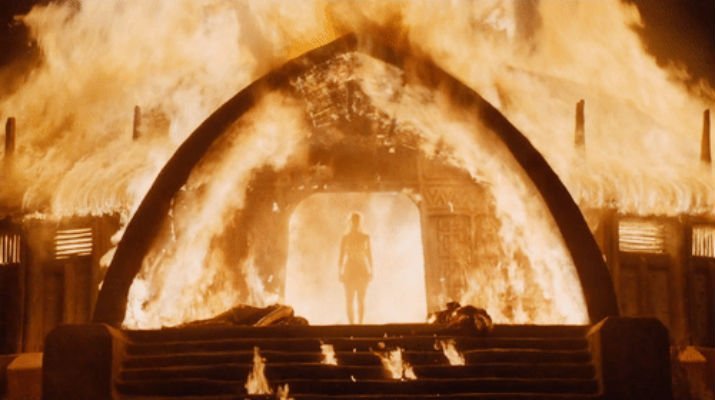 Ultimate female power. The twist in this scene was rather entertaining, but surprisingly, we kind of knew it was going to happen in a way or another. I liked that the show was trying to mirror her emergence in season 1, when everyone was completely astonished by her and decided that is reason enough to just worship her and follow her into starvation and draught. I honestly, don’t believe the Dothraki should be following her. You married a Khal out of a million other Khals, we are not entitled to worship you and follow you every time you fail to get burned. Every thing in this show has been going very smoothly for her, Sansa got raped! And this woman was with the Dothraki and she was unharmed all along. I’m not impressed by her storyline. But I am very excited about Tyrion Lannister becoming the political he has always been, flashbacks to King’s Landing much? Way to go Tyrion, less eunuch jokes and more politics please.