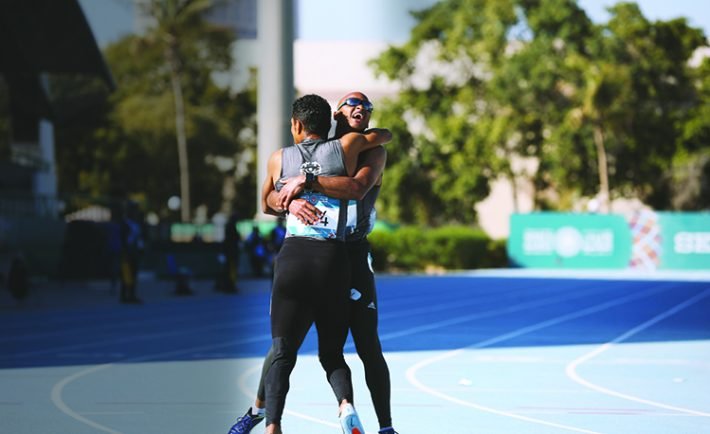 The Saudi men’s team wins the gold medal during the relay.

When 50 Saudi athletes arrived home from the Special Olympics World Games Abu Dhabi 2019, hearts around the Kingdom beat as one in celebration of their return. They were welcomed back as the heroes they are; airports across the Kingdom hosted jubilant family members, friends, co-workers, government officials, and royal family members, all excited to applaud the phenomenal efforts of the team who gave it their all to bring pride to their country and us all.

At the World Games, Saudi Arabia was represented by 21 women and 29 men. Throughout the week-long competition, the athletes created inspiring moments of sheer passion, skill, and joy, culminating in a life-changing experience for everyone that was involved.

It’s these moments that are important, even more so than the 40 medals won by Saudi Arabia’s athletes during the World Games, as they represent the real heart and soul of the Special Olympics. For several of the athletes, this was their first time competing outside of the Kingdom. For others, it was their first time to visit Abu Dhabi. Every moment, in the lead-up to and during the World Games, has created a lasting experience that every athlete, family member, volunteer, and spectator will carry with them for the rest of their lives.

For Faiz AlShehri, Assistant to the Head of Saudi Arabia’s delegation, the most overwhelming moment of the World Games was when the they entered the Zayed Sports City stadium during the opening ceremony. “We were representing Saudi Arabia with the biggest delegation to date, including female athletes for the first time, and I felt so happy and proud to be there.” 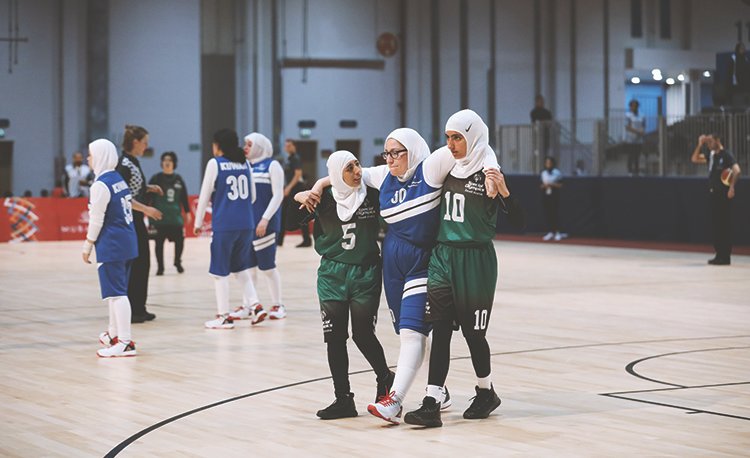 The Saudi women’s Basketball team imbibes the spirit of the games as they assist an injured opposing player.

Having spent a lot of time with the athletes during the course of the World Games week, Faiz saw the impact participating in such an event had on them. “They met new people, made new friends. This is what the Games were founded for and what they encourage – friendships and inclusion of athletes with intellectual disabilities, and the opportunity to meet their peers from other countries and different cultures.”
There are hundreds of unsung heroes who gave their time, talent, and love into making the journey possible. Accompanying Saudi Arabia’s team were family members, coaches, doctors, and nutritionists, as well as representatives from the Special Olympics Saudi Arabia Federation.

One of the parents at the World Games was Heba Al Shawli’s mother, Reem Abdulrazzak. Heba participated in several athletics events, winning gold and bronze medals. “My daughter’s achievements give me a great sense of pride, and I am also proud of all of the other athletes,” she said. “More than being a success just for Heba, I see the participation of all of our athletes as a national achievement.  The Special Olympics World Games is a platform that promotes respect of the differences we all have, and it proves that people with intellectual disabilities – people with disabilities in general – have amazing skills that should be nurtured and invested in.”

More than the excitement of winning, though, is the opportunities for growth that the World Games offered to Heba, and many other athletes. “These Games have strengthened her courage, and she has become more disciplined and committed to her daily routine, which now includes exercise and training.” 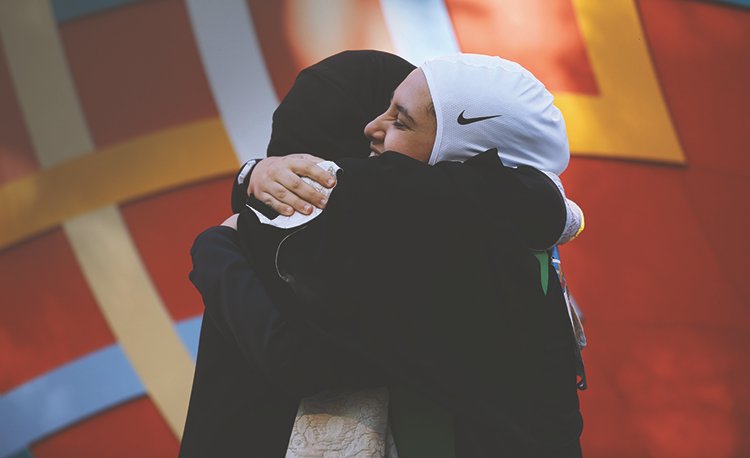 The sentiment was echoed by Mona Albaiti, who coached the award-winning women’s bocce team. “The World Games has had such a major positive impact on the athletes, especially in terms of boosting their self-confidence and their enthusiasm for participating in sport.” It was an emotional experience for Mona herself.

“I cannot describe how I feel, being part of a team that has grown to be more like a family. For months, our athletes have worked hard, supporting one another through the highs and lows that come with being international athletes. Watching them grow together and become more confident in themselves and their abilities, seeing the hard work and effort come to fruition, and getting such a positive response from the media – it was all beyond our expectations.”

Volunteers from Saudi Arabia also travelled to the UAE to join thousands more from around the world who donated their time to make the Special Olympics an incredible experience. The ecosystem of support extends beyond the attendees; it includes the communities in which the athletes were raised, and the educational and rehabilitation centers around the Kingdom which play such an important role in providing education and opportunities to people with intellectual disabilities. The Help Center in Jeddah, for example, is where the women’s unified basketball team began its gold-medal journey.

It also includes the companies that embrace diversity and practice inclusion by employing people with disabilities, and everyone who takes the time to engage with a post featuring Special Olympics Saudi Arabia on social media. Every little moment counts and contributes towards the creation of a nationwide environment that supports and celebrates everyone.

If there’s one thing that our athletes have shown us, it’s that the support of the community can help everyone shine. As the dust settles on the Special Olympics World Games Abu Dhabi 2019, the athletes have been welcomed back and celebrated into their everyday lives, with the knowledge that they’ve made their country proud, and the understanding that this is far from the end of their story. Their experiences have made them stronger and more confident, they’ve made friends from around the world, and they’ve proven that it’s possible to make dreams come true.