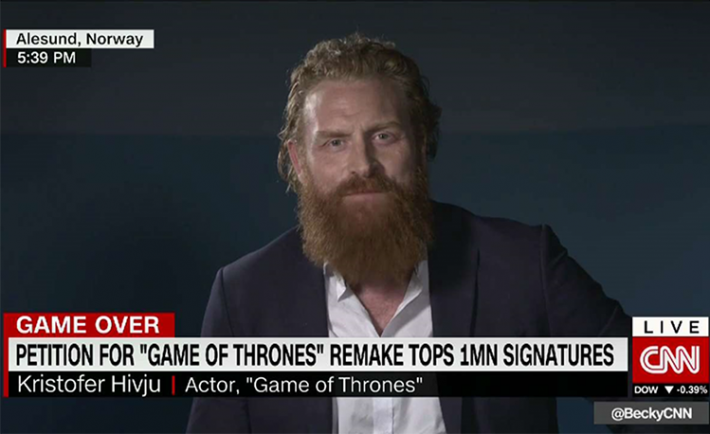 Game of Thrones actor addresses the petition to remake the final season.

In an interview with CNN’s Becky Anderson on Connect the World, Game of Thrones actor Kristofer Hivju(who plays Tormund Giantsbane in the series) discusses his thoughts on the final season and reflects on his years spent filming the popular show.

On whether he imagined the show would become as big as it has:
“No and when I joined the show in season three it felt like I was joining the Beatles and then the Beatles just started to grow. The enthusiasm has been overwhelming and I must say it has just been a crazy ride and here we are. The end is here”

On his castmates and who he has enjoyed working with:
“I’ve been working a lot with Liam Cunningham and Kit Harrington, everybody. It’s just been a pleasure to work with great people and the thousands of people just trying to give the fans the best result as possible. It’s been fantastic. Hard work but fantastic”

On the atmosphere on set during the final season:
“When we came back from every season it felt like we had to do it better. The ambition grew, the budgets grew and everybody… we were like a family because we had been working together for like 8 years some of us, 6 years some of us and everybody was giving their ultimate best because that’s what we think you deserve”

On the Starbucks coffee cup appearing in a scene of the show:
“Maybe it was a PR stunt maybe it was not. I am one of the suspects that’s true and the thing was, on that day, the Director gave us free coffee from Starbucks and so it could be Kit Harrington. I’m just saying it could be”

On calls to remake the final season:
“I am happy with the ending but that is the essence of Game of Thrones, people should be discussing everything, and people should be doubting everything because it’s unexpected. When you have a TV show where you kill the main character in the first season then everything can happen, and Game of Thrones doesn’t follow the rules of storytelling it follows the rules of life. I think the passion is fantastic but there will never be a remake, what we’ve made is what we’ve made and I’m very proud of it”

.@kristoferhivju tells me he’s “very happy” with @GameOfThrones final and that “there will never be a remake” of the final season #GOTfinale #TormundGiantsbane pic.twitter.com/GlHktxPHWG