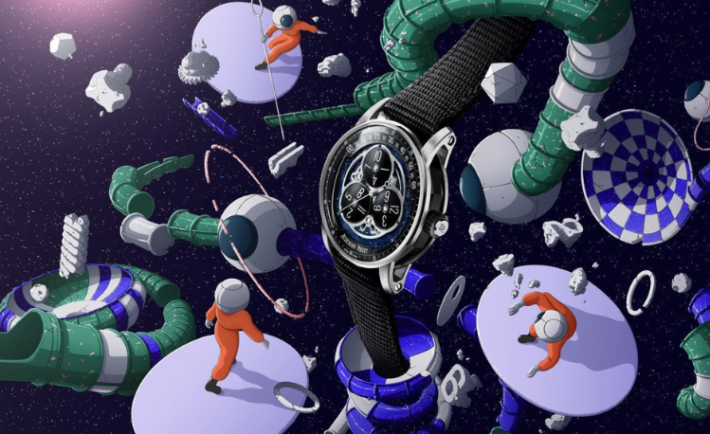 Invented in the 17th century, wandering hours are a type of horological complication that display the hours using a system of satellites that gravitate along a minute scale arranged in the form of an arc.

This aesthetic presentation of the hours and minutes brings a certain mystique to the reading of time. After falling from favour in the 20thcentury, this system was rediscovered and reintroduced by Audemars Piguet in 1991. Named the Starwheel, this unusual mechanism equipped many models up until the early 2000s. Today, the Starwheel is making a comeback in the Code 11.59 by Audemars Piguet collection, whose ultra-contemporary design highlights this fascinating display while also paying tribute to a relatively unknown classic in Haute Horlogerie complications. 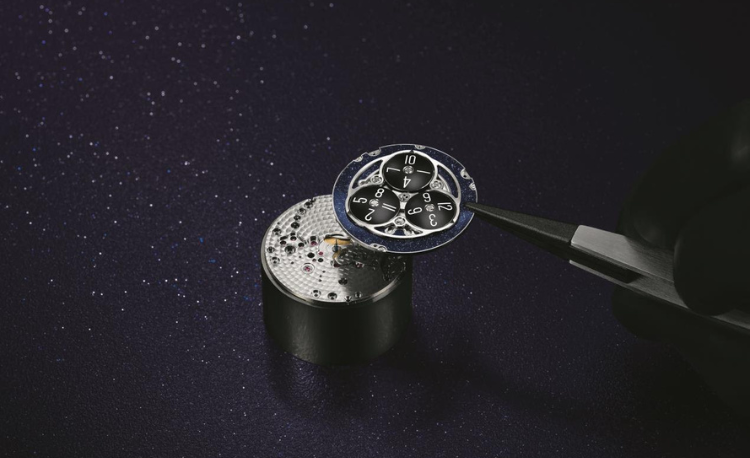 Wandering Hours in an ultra-contemporary Design

From the 17th to the 20th century, the beauty of the wandering hours complication laid in a mysteriously hidden mechanism. Reinterpreted by Audemars Piguet in 1991, this complication revealed in all its splendour with its mechanism visible on the dial.

The new Starwheel launched this year is a continuation of the models from the 1990s and is housed in the ultra-contemporary Code 11.59 by Audemars Piguet case, whose architectural lines are enhanced by the wandering time display. The architecture of the case is reinforced by the overlapping of geometric shapes, including a round bezel, caseback and Starwheel discs as well as a rounded octagonal case middle.

Blue aventurine serves as a shimmering backdrop for the three discs that rotate on their own axes, like planets in the tiny universe of the dial. The three slightly domed discs are made of aluminium and are tinted black thanks to a PVD treatment, before being adorned with an opaline sandblasted finishing touch. The white wandering hours numerals are then transferred onto the dial. Following the contemporary design, the 120-degree minute sector, which extends in an arc from 10 to 2 o’clock, and the inner bezel, are both black with white minute indications. 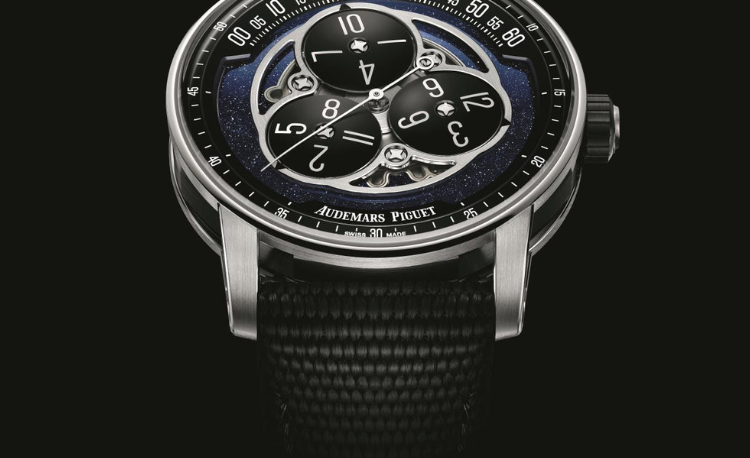 This new 41 mm reference plays with materials by combining aventurine with 18-carat white gold and black ceramic. This diversity of materials as well as the refined hand finishing – a signature of the Manufacture, which creates an infinite play of light – underscores the complex design of the Code 11.59 by Audemars Piguet collection. In addition to this, the 18-carat white gold bezel, lugs and caseback contrast with the black case middle and the new black ceramic crown.

Like the gold components, the ceramic case middle is meticulously finished with the iconic interplay of polished bevels and satin-finished surfaces. Furthermore, Audemars Piguet artisans have used their expertise to achieve the perfect alignment between the multiple angular and round surfaces of the case, which is only possible thanks to their manual craftsmanship.

On the dial side, the double-curved sapphire crystal magnifies both the numerous details present in the blue aventurine and the finishing of the various elements, while also bringing increased depth to the dial. On the back of the watch, the sapphire crystal reveals the beating heart of the movement, as well as the 22-carat pink gold oscillating weight dedicated to the collection. This new reference is fitted with a textured black rubber-coated strap and a new pin buckle engraved with the Audemars Piguet logo, instead of the usual AP monogram. 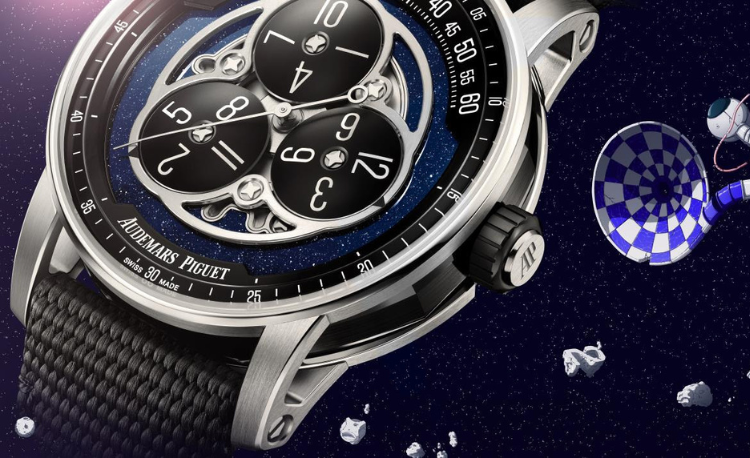 In the Code 11.59 by Audermars Piguet Collection

For the very first time, the emblematic Starwheel display is integrated into the Code 11.59 by Audemars Piguet collection with the selfwinding Calibre 4310. This next-generation hour, minute and seconds movement is directly derived from the Calibre 4309, to which a new module has been added. Combining watchmaking technology, traditional know-how and refined decorations, this movement has a minimum power reserve of 70 hours and is water-resistant to 30 metres.

The time display is achieved thanks to a central rotor operating a complete revolution in three hours and on which are fixed three aluminium discs that turn on their own axes. Each disc has four digits from 1 to 12 that take turns in pointing to the arched sector at the top of the dial on which the minute scale is printed. The 18-carat white gold trotteuse is slightly curved at the tip to follow the relief of the discs, indicating the seconds like in a traditional timepiece.

A tradition of Timepieces with Wandering Hours

The wandering hours system can be traced back to the 17th century following a special request from Pope Alexander VII. Suffering from insomnia that was aggravated by the ticking of a clock, he ordered a “night clock” from the Campani brothers who were clockmakers based in Rome. He requested a clock that would be silent and easy to read in the dark. The Campani brothers presented the Pope with the first wandering hours clock, where the time was read on a semi-circle in an aperture that indicated the quarter hours and was lit from the inside. This night clock was the precursor of the wandering hours system.

From the end of the 17th century, this complication was introduced into pocket watches without backlighting. While the arc-shaped aperture still measured 180 degrees, the minutes were graduated in addition to the quarter hours for greater precision. During the following century, these watches were offered as prestigious gifts, often bearing the effigy of famous personalities.

In the 19th century, the popularity of the wandering hours complication started to wane. The timekeepers that were produced at this time presented a sector of 120 degrees to facilitate the reading of the time. The quarter hours disappeared along with the small window for the hours, although the display remained mysterious as the mechanism was still hidden. The 360-degree wandering hours version made an appearance at this time too, although it was gradually replaced by the jumping hour that was to become typical of the Art Deco period during the first half of the 20th century. 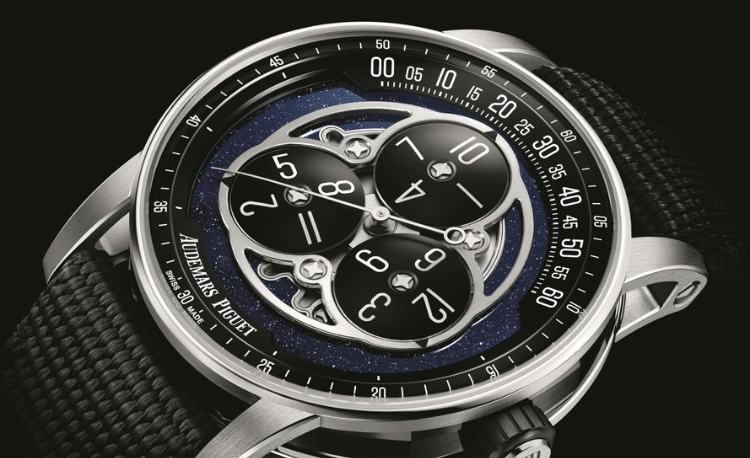 In 1989, an Audemars Piguet watchmaker rediscovered the wandering hours system in an article in the Journal suisse d’horlogerie. This was a period of increased creativity as the industry was seeing a revival of mechanical watchmaking. In 1991, after 18 months of development, the Manufacture’s first wandering hours watch was presented (Ref. 25720). Named the “Star Wheel” – probably in reference to the three stars that support the sapphire hour discs fixed on a large central wheel – this watch broke the mystery of its operation by revealing the mechanism.

Between 1991 and 2003, around 30 “Star Wheel” models were produced by the Manufacture in several different collections. These aesthetically creative timepieces varied in design with the arc-shaped aperture present in different lengths and locations, some of which also incorporated gemsetting and openworking. By reintroducing the wandering hours system, Audemars Piguet paved the way and opened a new chapter in 21st-century watchmaking.

Today, with the Code 11.59 by Audemars Piguet Starwheel, the Manufacture is reviving this little-known complication as well as paying a highly contemporary tribute to traditional watchmaking.