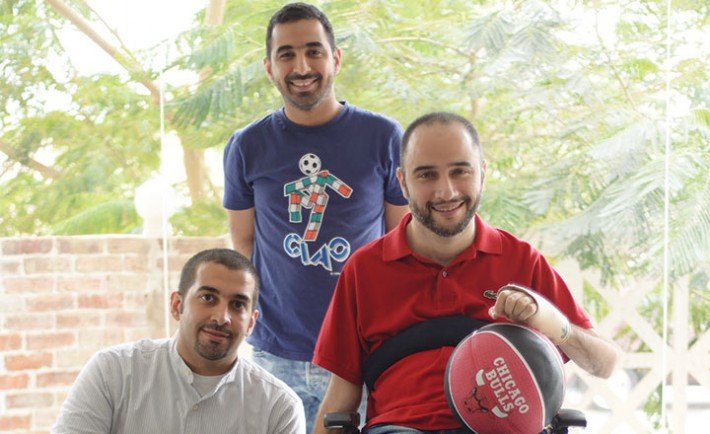 Destination sat with Rashad Barmada, Mustafa Alsaady and team member, Youssef Banjar to delve into their Team Up sports world.

Mustafa Alsaady, Rashad Barmada and Ramzi Barmada had put on their game faces and set up their sports event managing company, Team Up, in Jeddah. Rashad Barmada starts by saying, “Due to our love of sports and to the fact that we know the market here and abroad, we decided to start Team Up.” Barmada is a mental health councilor who has always been immersed in sports even after an ill-fated car accident left him paralyzed. Alsaady is another huge sports fan, who is doing his PhD on renewable energy in England. They have been friends for 20 years and partners since 2011.

Barmada explains the nature of Team Up’s work as he says, “We have the programs and the events sections.” As far as events are concerned, “a client would approach us to set up an event for a certain sport at a specific time targeting particular people. So we arrange that. Other times we are the ones to come up with an idea for an event, create it from A to Z and sell it to sponsors.”

Due to the fact that Team Up has organized many basketball events such as the Jeddah 3 on 3 Tournament and is endorsed by the International Basketball Federation (FIBA) too, people seem to think it is only basketball oriented. Barmada sets the record straight though, “We became the number one basketball event organizing company since we got lucky with basketball when we first started. But we arrange a lot of other sports tournaments and events.”

The programs part of Team Up is concerned with training children in different sports. Barmada says, “We offer football, tennis, basketball and chess programs, where we get coaches from abroad to teach the children.”

“Sports will teach them win and loss, teamwork, confidence and respect. These are all things they will need in life.” — Mustafa Alsaady

The team also spoke of their beginnings, as they did not enjoy an easy ride. Alsaady clarifies, “Some of the difficulties we faced at the beginning were due to the fact that we were new. Our first struggle was finding companies that would believe in us. We were fresh on the market and not everyone wanted to take a risk on us.” This is why they dedicated a special thanks to McDonalds, Tokyo Games and Lifestyle for being the first companies to believe in them and encourage them.

Banjar then speaks of another hindrance, “Companies care about exposure, how many people are attending the event and so on. Some people don’t care about the CSR aspect of it, to do it for the society and youth and so on. They ask if it will not get us the exposure we want, why should we do it?”

“Another major problem we faced was finding venues to host the events,” Alsaady continues. This remains a problem because suitable locations are scarce and a lot of factors, such as the size and number of attendees, have to be taken into consideration.

Team Up is the true embodiment of passion in sports. The tournaments, events and programs they arrange and supervise are all aimed at strengthening community ties with sports.