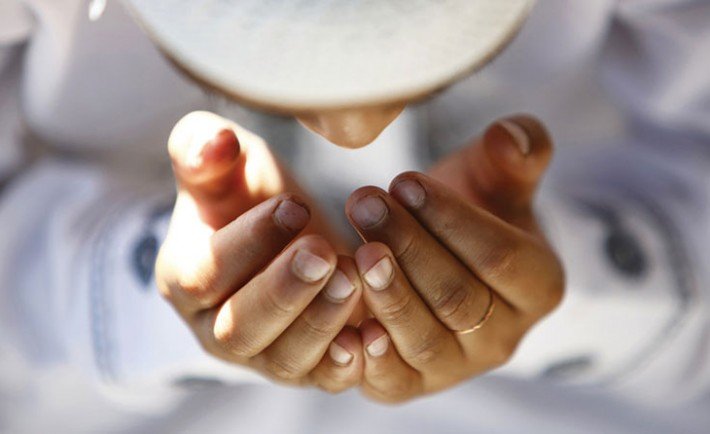 “Whoever revives my Sunnah then he has loved me. And whoever loved me, he shall be with me in Paradise.” – The Prophet (PBUH) [Tirmidhi]

The Prophet (PBUH) said:
“Feed the hungry, visit the sick, and set free the captives.” [Bukhari]

Visiting and spending time with the ill has two major benefits: You demonstrate love towards another, instantly tightening the bonds of kinship/friendship. Also, to see someone who is unable to function as well as they normally can, is a strong reminder to all of us of the health blessing that we currently have and take for granted.

It was narrated from Anas: “The Prophet prohibited that a man should drink while standing.” (Qatadah said) So it was said: “And eating?” He (Anas) said: “That is worse.” [Tirmidhi]

Sitting down to eat slows a person in their eating habits, reducing the amount they are likely to eat and the unhealthy speed by which they do so.

Sleeping On Your Right Side

“When Allah’s Messenger went to bed, he used to sleep on his right side.”[Bukhari]

One of the main points to consider when you want to have a productive day is to look at how you go to sleep. The Prophet (PBUH) was the most successful in how he spent his days and the way in which he took to his sleep, plays a role in helping him be the way he was.

“During your sleep, Satan knots three knots at the back of the head of each of you, and he breathes the following words at each knot, ‘The night is, long, so keep on sleeping.’ If that person wakes up and celebrates the praises of Allah, then one knot is undone, and when he performs ablution the second knot is undone, and when he prays, all the knots are undone, and he gets up in the morning lively and in good spirits, otherwise he gets up in low spirits and lethargic.” [Bukhari]

“If there is any healing in your medicines, then it is in cupping, a gulp of honey or branding with fire (cauterization) that suits the ailment, but I don’t like to be (cauterized) branded with fire.” [Bukhari]

The Prophet would be cupped on a regular basis. This form of treatment has been used throughout history in a number of countries.

Saying Salam/Bismillah Before Entering a House

The Messenger of Allah said: