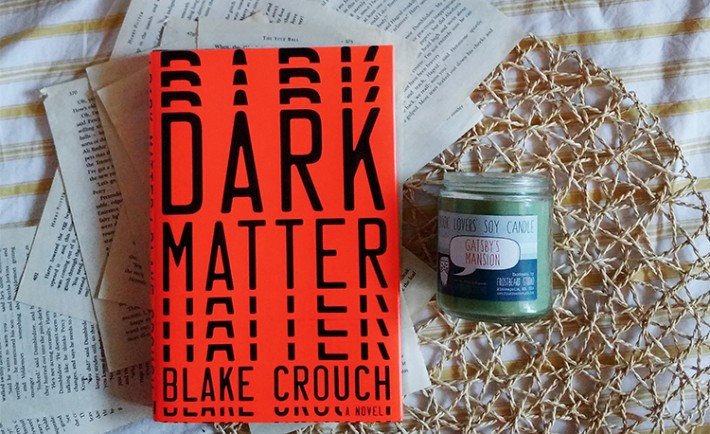 Mindboggling sci-fi thriller anyone? Dark Matter completely destroyed any notion of ‘normal’ I had about the book. It’s far from normal/ordinary/common and other adjectives that signify the ‘usual’. Dark Matter is impossibility defined.

In high school we learned about quantum physics on the micro level (because that’s what can comprehend on the matter); it’s all about the same particle being in two places at once, thus having two or more separate versions of reality. Crouch expands that theory to the macro-level. His subjects? Us humans. Dark Matter is about multiverses, multiple realities and the path not taken.

The Premise: Jason Dessen, a university lecturer who once had the potential to become a world-renowned physicist, is kidnapped late one night. He wakes up in the wrong world. In this life he has achieved everything he ever wanted, but he’s not married to Daniela and his son Charlie does not exist. What unravels next makes him question his own sanity before taking him down a violent and unbelievable path.

The Writing: Crouch writes very precisely. One thing that stood out was how the author was in command of exactly what he wanted the readers to know. There was a surprising element, revealing how emotionally charged the story was. I found myself immersed in Jason’s worlds and literally at the edge of my seat due to anticipation, excitement and the impossible unfolding of the pages.

I started reading at 2 a.m. on a Thursday night and I could not put it down until my eyes turned to lead and I had to sleep. I was on page 90 when I stopped. I read the rest of the 350+ page book in one sitting on Friday. In other words, I was hooked. Dark Matter is just that good. It sucks you in and captures you in its grip prohibiting any kind of release.

Bookmail that I just couldn't stop staring at. Dark Matter by Blake Crouch has such a beautiful neon cover. I'm eager to read this scifi thriller over the weekend, absolutely can't wait. Thank youuuu Crown Publishing @crownpublishing for sending this beauty! Check out the synopsis below and get a copy if you want to join the #ReadWithSumaiyya readalong – I'll be doing one readalong every month, starting with Dark Matter. Synopsis: “Are you happy with your life?” Those are the last words Jason Dessen hears before the masked abductor knocks him unconscious. Before he awakens to find himself strapped to a gurney, surrounded by strangers in hazmat suits. Before a man Jason’s never met smiles down at him and says, “Welcome back, my friend.” In this world he’s woken up to, Jason’s life is not the one he knows. His wife is not his wife. His son was never born. And Jason is not an ordinary college physics professor but a celebrated genius who has achieved something remarkable–something impossible. Is it this world or the other that’s the dream? And even if the home he remembers is real, how can Jason possibly make it back to the family he loves? The answers lie in a journey more wondrous and horrifying than anything he could’ve imagined—one that will force him to confront the darkest parts of himself even as he battles a terrifying, seemingly unbeatable foe.

The Concept: Dark Matter takes root in an astonishing concept that becomes more real, plausible and imaginable the further you unravel the story. Despite being all about quantum physics, the story was not a bore at all (although I personally love physics). The author’s style makes this book suitable for anyone who wants to read a great book, sci-fi or not.

Physics aside, Crouch brings you face to face with what the ‘path not taken’ might be like. He tackles the regrets a person may have, and what they’re willing to do to turn things around.

Stand-Out Points: Dark Matter is everything a thriller should be. The continual thickening of the plot was definitely a huge bonus. There is an intense sense of danger at various points in the story and it keeps getting better. There are a couple of plot developments that any reader should have been able to guess, but it takes you by complete surprise anyway. The character’s development is great and there are a couple of characters who I absolutely loved and wished to further explore.

Overall? I think Dark Matter is a 2016 must-read, especially for fans of thrillers and sci-fi. Give this book a try even if you’re not into either genre, it makes for an exceptional reading experience.