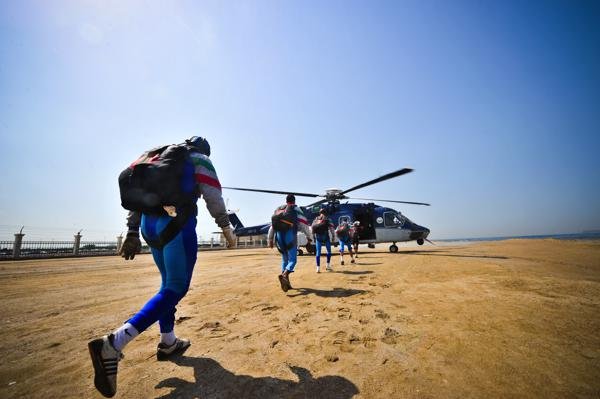 Falling into any job is difficult for most people. But for the four members of the Red Bull Air Force, it couldn’t have been easier.

All four of the skydivers have similar stories of how they began a career in skydiving. Sean MacCormac, Jeff Propenzano, Omar Al-Hegelan and Othar Lawrence experienced the free fall thrill that comes with skydiving and knew right away that they wanted to do this forever.

“The easiest way to describe it, is something everyone has experienced before,” You know when you’re a kid and you stick your hand out the window and you feel the air rushing over it. (Skydiving is) like that but over your entire body. It’s different from when you fall off a ladder or when an elevator bottoms out. You don’t get that same full body resistance.”

Their stay in Jeddah was part of the Seventh International Skydiving Champions with 16 teams from around the world. The final jump was made up above the Jeddah Fountain shortly after 5PM when the fountain is at full strength.

“What most people don’t realize is that…after the first initial couple of seconds of exiting the aircraft, you don’t feel as though you’re falling,” Al-Hegelan said. “You feel as you feel like you’re floating. The visual perspective from 10,000 feet, 8,000 feet, 7,000 feet, looks pretty much the same. So you’re not getting a ground rush so you don’t feel like you’re falling instead you have this floating sensation. It’s not like being in roller coaster where you feel your stomach coming up to your throat and you feel this uneasy queasy feeling. Not at all, it’s this very natural floating feeling.

Throughout the week the Air Force team (who were not part of the competition) performed aerial stunts using canisters of hot smoke which attached to their shins released a cloud of colored smoke to mark their stunts in the air so they can be seen more clearly from the ground, Propenzano said. They also did Free Flight Jump, Wingsuit jumps and base jumps. Each employ different techniques but base jumping was the greatest crowd pleaser. Lawrence leaps from a the helicopter and deploys his shoot at from ground level at what seems like the very last moment to the delight of the crowds.