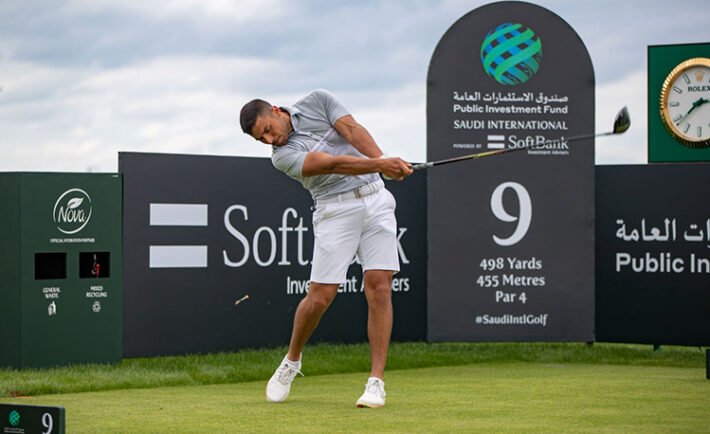 “I played nine holes with Faisal and Saud and obviously they have a lot of talent,” said Johnson who witnessed big-hitting Salhab drive the 17th green during their round.

Al-Sharif has enjoyed success at Jordan’s Open Golf Championship recently whilst Salhab raced to victory in the recent Saudi Open. The pair were also part of the victorious Saudi team that won the Pan Arab Championship. The pair will join Othman Almulla, Saudi Arabia’s sole professional in the field for the 4th edition of the fast-growing tournament.

They join a stellar line-up that will compete for the $5 million on offer at King Abdullah Economic City (KAEC), with the likes of Bryson DeChambeau, Xander Schauffele, Patrick Reed, Cameron Smith, Lee Westwood, Tyrell Hatton, Ian Poulter, and Phil Mickelson all amongst the field.

“It’s an honor to represent my country in such a huge tournament as the Saudi International, with all those renowned names in golf. My plan is to do as well as I can, as I’ve been practicing well and have had some fantastic practice sessions with my coaches and the rest of the team here.”

“With all this enthusiasm, we’re quite thrilled to start the competition tomorrow; it’s going to be a great week.”

Golf Saudi is running its first-ever ‘National Golf Week’, alongside the tournament with multiple golf activities and opportunities that will be organized throughout the Kingdom including free golf across all its courses.

“Golf Saudi has contributed to the growth of golf in the Kingdom; all of the work that has been done in schools, with children, and, of course, with the national team, has been outstanding,” added Al-Sharif.

“With the program, they’ve put in place, I believe we’ll see a lot more Saudis getting enthused about golf. My advice to young kids who want to learn to play golf is to have fun!”