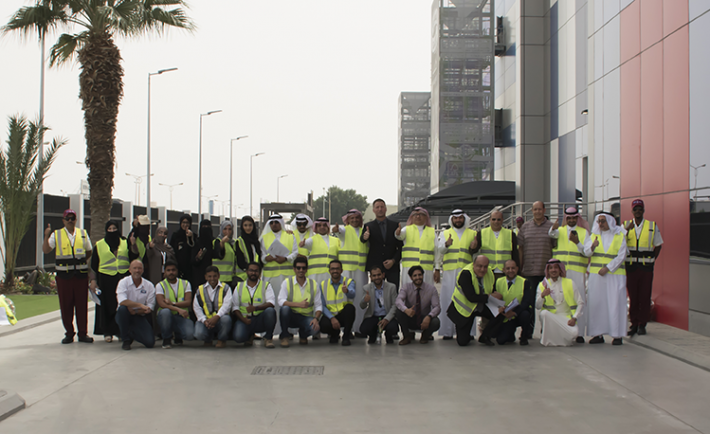 Largest warehouse in the SADAFCO network will enable company to improve product quality and availability.

Jeddah, Kingdom of Saudi Arabi 24 April 2019: Saudia Dairy and Foodstuff Company (SADAFCO) announced that its Jeddah Central Warehouse, the largest in the company’s network, is now operational. The facility has a capacity up to 42,000 pallets, and total building, automation & semi-automation, and engineering & equipment costs amounted to around SAR 145 million.

The new warehouse enables SADAFCO to move inventory much closer to factories, driving down logistics costs, and also removes the requirement to store raw and packaging materials in external storage facilities. Depots can now be replenished both, based on sales, helping to reduce stock holding in the value chain and improve product quality and availability, ensuring consumers receive fresher produce.

“The new Jeddah Central Warehouse is enabling us to enhance the level of service we provide to our customers and will provide long-term infrastructure solutions throughout the value chain for SADAFCO. By reducing costs and boosting operational efficiencies, the facility is making a vital contribution to strengthening SADAFCO’s Saudia branded growth path and performance,” said Wout Matthijs, CEO of SADAFCO.

The construction of the warehouse was initially announced in 2017. Its commissioning started in February 2019 and operations in April 2019. The building has a footprint of 14,345 m², and has been constructed over three floors.

An exclusive media tour of the Jeddah Central Warehouse, featuring a presentation by the SADAFCO team, was held on April 24, hosted by Mr. Talal Al Nounou, Manager Human Resources, Government and Public Relations.

Speaking at the media event, Mr. Talal Al Nounou, Manager Human Resources, Government and Public Relations, said: “The Jeddah Central Warehouse will have a positive impact on SADAFCO performance, enabling us to move from a push system to a pull solution, and utilize our depots more efficiently.”

SADAFCO is a publicly-listed company which has been producing high-quality dairy and foodstuff products under the Saudia brand name since 1977, a year after the company was formed. Saudia enjoys being one of the market leaders in the Kingdom of Saudi Arabia in the production of tomato paste, ice cream and milk.

Based in Jeddah, SADAFCO operates sales and distribution depots in 24 locations across the Kingdom of Saudi Arabia, Bahrain, Jordan and Kuwait. Saudia products are also exported to several countries in the MENA region.

SADAFCO currently operates three ISO22000:2005-certified factories in Saudi Arabia, two in Jeddah and one in Dammam. All three factories also have ISO14001 and OHSAS18001 accreditation.