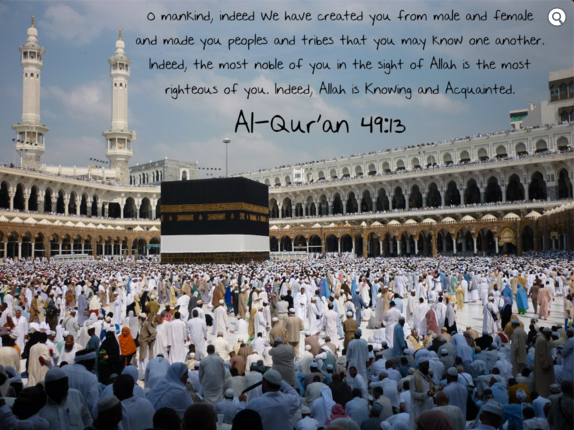 “Racism is prejudice, discrimination, or antagonism directed against someone of a different race based on the belief that one’s own race is superior.”

Allah has created each of us uniquely, with different colors, skin textures, voices and physical features. Yet, we all are the descendants of Adam and Hawwa, and are a part of the human population. Racism and discrimination has no place in Islam. Many a times, Allah reminds us to enjoin justice and fairness, and warns us that He is All-Aware and Ever-Seeing of our actions.

“Be just: that is nearer to piety, and fear Allah. Verily, Allah is Well-Acquainted with what you do.” (Al-Maa’idah 5:8)

Racism is a form of injustice; an oppression against others. It only causes hatred and discord amongst different peoples, leading to corruption.

“And do good as Allah has been good to you, and seek not mischief in the land. Verily, Allah likes not the Mufsidoon (those who commit great crimes and sins, oppressors, tyrants, mischief-makers, corrupt.)” (Al-Qasas 28:77)
All forms of injustices are frowned upon in Islam. The perpetrators of inequity, no matter how small or big, will be recompensed for their actions in full. They should contemplate that they will have to stand before Allah on a coming day and will have to answer for their deeds.

No race has any excellence over another. We are all created from the same substance. No color is better than another. We are the same species, from the same ancestors. Color and race is something beyond our control. Rather, it is our deeds and character that differentiate us, and make us stand out. The more we excel in good conduct and morality, the better it makes us.

Narrated Masruq, “We were sitting with `Abdullah bin `Amr who was narrating to us, he said, “Allah’s Messenger used to say, ‘The best among you are the best in character.” (Bukhari)

We should see our colors, skin tones and nationalities as an opportunity for multiculturalism, where we co-exist with others side-by-side sharing our cultures and customs, learning from each other and striving towards goodness.
Allah says in the Quran, “O mankind, indeed We have created you from male and female and made you peoples and tribes that you may know one another. Indeed, the most noble of you in the sight of Allah is the most righteous of you. Indeed, Allah is Knowing and Acquainted.” (Surah Hujurat 49:13)

May Allah aid us in our strife for good deeds and righteous actions.