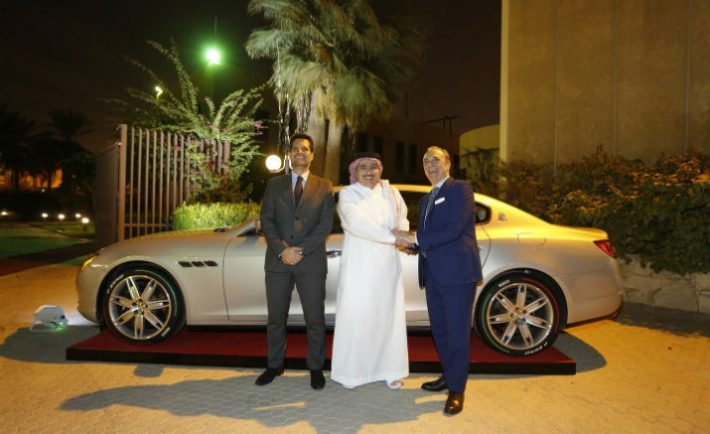 Pirelli, one of the symbols of Italian industrial excellence, has completed its special seven-star series of pit-stops at Italian embassies around the world with a visit to the Italian Embassy in Riyadh where H.E. Ambassador Luca Ferrari received the brand’s bespoke ‘il-tricolore’ tyres. His Excellency Mr. Luca Ferrari was gifted a set of four specially customized P Zero Colour Edition tyres, which carry the red, white and green of the Italian flag on the inside of the tyre wall. The special tyres were fitted to the official Embassy car in Riyadh with Ambassador Ferrari becoming the seventh top ranking Italian diplomat to receive the special gift from premium tyre leader Pirelli.

The tricolor tyres were presented during an exclusive event at the Residence of H.E. Luca Ferrari to the presence of more than one hundred guests. Ambassador Ferrari highlighted how more than 30% of the Italian export is made by machinery and automotive goods, which makes Italy Europe’s second largest exporter of machinery and the second largest manufacturer in the EU. The Ambassador also underlined that the best cars in the world run on Pirelli tyres, including Formula 1 cars, and that he is proud to receive the beautiful “tricolore” tyres.

Ambassador Ferrari joins his counterparts in Germany, the United Kingdom, China, Russia, the United States, and UAE in becoming a recipient of the tyres which are a symbol of Pirelli industry design and safety excellence stretching back more than 140 years. ‘Il-tricolore’ tyres are also on display at Italian diplomatic offices in major global cities including Paris, Ankara, Tokyo, Mexico City, Brasilia, Buenos Aires and the “Farnesina” (the Ministry of Foreign Affairs Headquarter in Rome).

Carlos Milani, Managing Director Pirelli, Middle East said: “Saudi Arabia is one of the key markets for Pirelli and the gifting of ‘il-tricolore’ tyres to Italy’s ambassador in the kingdom aligns with our strategy to expand our presence across the Middle East.”

“The lifting of the ban on women driving in Saudi Arabia earlier this year has created new opportunities for leading players in the automotive industry. As the leader in the premium tyre sector, this development represents an exciting stage in Pirelli’s growth in the region.”

Recently, the United Yousef M. Naghi Co. Ltd. launched the Pirelli retail concept Pirelli Performance Centre in Jeddah, KSA, a first-of-its-kind for the GCC. The center is designed to meet customer demands for integrated tyre maintenance and oil services and offers a female-only lounge in response to the royal decree to allow women in the kingdom to drive.