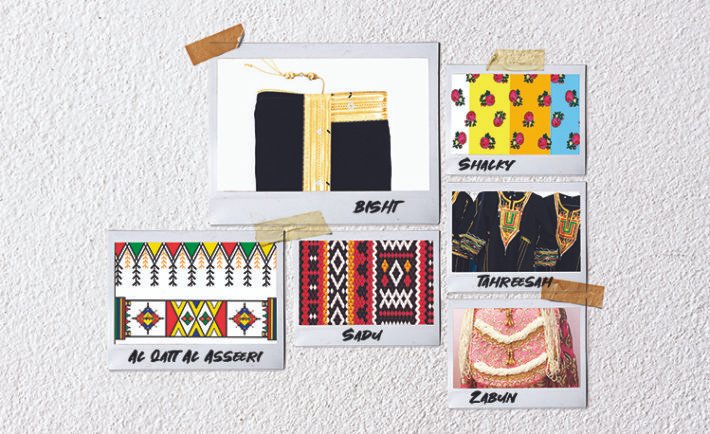 When art and culture intertwine.

Traditional handicrafts are an important aspect in our culture. Patterns that we have seen in old photos of our parents and grandparents have our identities and heritage, their steadfastness a strong proof of the Saudi community’s commitment to authenticity.

Al Qatt Al Asseeri
Born in the heart of the Asir Region southwest of the Kingdom, Al Qatt Al Asseeri is a geometrical art technique usually applied on interior walls of the homes in this region. It consists of lines, squares, circles, and different colorful shapes and symbols. Its simplicity and sophistication have left a mark, as it is still being used to this day.

Bisht
Known for occasions such as weddings, Eid, and graduations, the Bisht has always been a treasured piece of clothing by men in the Arabian Peninsula as a whole, and the Gulf region specifically. Al Ahsa has been home for Bisht-making since the 1940s. These elaborate “cloaks” usually come in solid dark colors – black, grey, dark brown – and are embroidered with gold or silver threads, exuding formality and luxury.

Zabun
Zabun originated from the Hijaz Region, west of the Kingdom. It is a distinctively and luxuriously embroidered piece of clothing, worn for weddings by women, embroidered with gold and silver threads detailed within the fabric. It comes in light colors, such as white and baby pink.

Shalky
Shalky is also known as “rose” or “garden” for its lively colors and floral patterns printed on cotton fabric. It has been used as a “house garment” ever since its emergence, for its simplicity and comfort. The pattern varies in design, but all have the unified flower symbol, and are usually associated with bright colors.

Sadu
Previously associated with bedouins in the Arabian Peninsula, Sadu has been renowned as one of the oldest and most famous Saudi patterns, locally and globally. The Jouf Region north of Saudi Arabia, in addition to Taif in the west, are the major producers of the Sadu pattern. Made of sheep or camel wool, it is used for tents, carpets, and winter clothing.

Tahreesah
In the past, women in Al Baha, west of the Kingdom, were characterized by a particular dress called Tahreesah, worn on special occasions. It features a distinctive embroidery and stitching on the soft, velvety fabric, located in the chest area, made of golden Swiss or Indian fine threads.