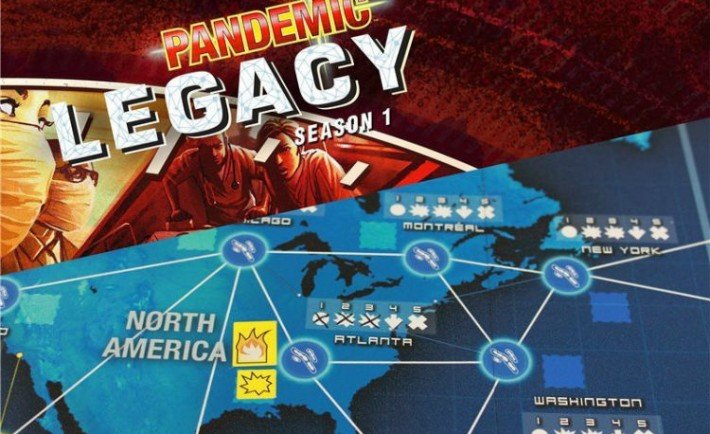 So I’ve been talking about fun and easy intro experiences ranging from 10 minutes to 1-2 hours or longer. But as with most games, once you’re done playing it, that’s it; everything resets for the next time. Naturally, right?

I’d like to show you the potential that’s out there when you dig deeper. Pandemic Legacy takes all that and adds a simple but powerful concept: persistence.

Quick summary of the original 2008 Pandemic game that this is based upon: excellent cooperative game of risk management with simple mechanics and challenging gameplay, about curing and eradicating increasingly-virulent diseases before they destroy the planet.

Pandemic Legacy keeps that core gameplay but first adds an entire layer of persistence. Instead of playing isolated games, you’re supposed to play one session (or two) each month of the year. But, whatever happens in one month carries over to the next. Instead of static cities on a board, these locations can riot and even get destroyed… permanently. Your characters can get scarred and develop germaphobia perhaps. The diseases can mutate and suddenly no longer be cured!

Next, there’s a layer of mystery and change, whether we’re talking about thick cardboard sheets with hidden messages that add new rules to the game (I mean this literally; there are stickers that you add to the rule book), or black boxes with hidden game components; any of which only get opened under certain conditions (box eight says “Open if you lost 4 games in a row.”)

There’s also a layer of finality to the game. Some cards are supposed to be physically torn up, but I’ve yet been able to do this. It just goes against everything we’ve been taught!

It is the strangest and most wonderful feeling to look upon that board after our first session and see it truly affected by what we did. Character sheets with stickered-on skills, stickers on unstable or rioting cities and even uniquely mutated diseases with the names we created for them written on the board.

And, when we come back to play it next month, it’ll still be there with all that history and things will continue to evolve past that in ways we cannot imagine.

I can’t wait till next month.