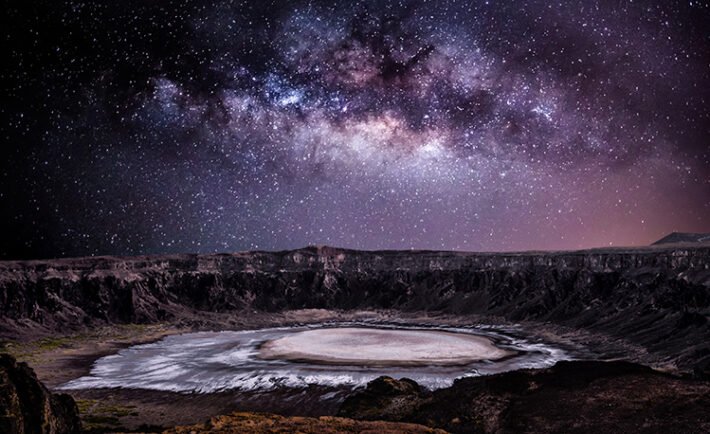 Glimmering stars, light beams, vivid astronomy, and terrains that are straight out of science fiction, here is a list of must-visit places locally and internationally. For most of the mentioned experiences, time is of the essence, so challenge yourself and try to catch them all, like intergalactic pokemon. 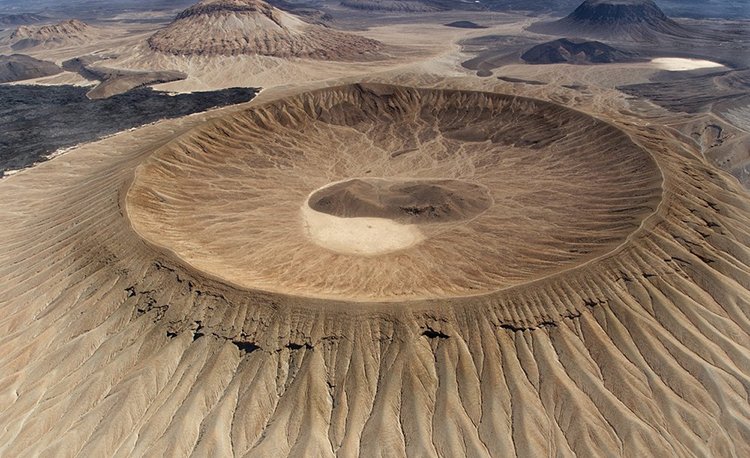 STARRY STARRY NIGHTS AT CARAMEL
Head to the Garameel area in AlUla, which is renowned for its clear skies and breathtaking views of constellations. Stargazing here, in particular, is mesmerizing, with the galaxy seemingly enveloping you in a cosmic blanket. Connect with the right tour guides and they’ll orient you too in the astronomical ins and outs of it all.

WAHBA CRATER
Ever wondered what it’s like to visit another planet? The surreal landscape and rock formations at Al Wahba crater get you closer to your interplanetary goals. The massive phenomenon measures 4km wide and 250-meters deep, carved on the famed Hafer Kishb basalt plateau.

WHITE VOLCANOES OF HARRAT KAYBAR
The tallest volcano in Saudi Arabia is Jabal Abyad, which stands at 2,093 meters in Harrat Khyber, Madinah. It was given the name ‘white mountain’ because the white ash that covers it resembles snow to the untrained eye, but is actually volcanic ash. All those who visit say that this site is better to see on foot. 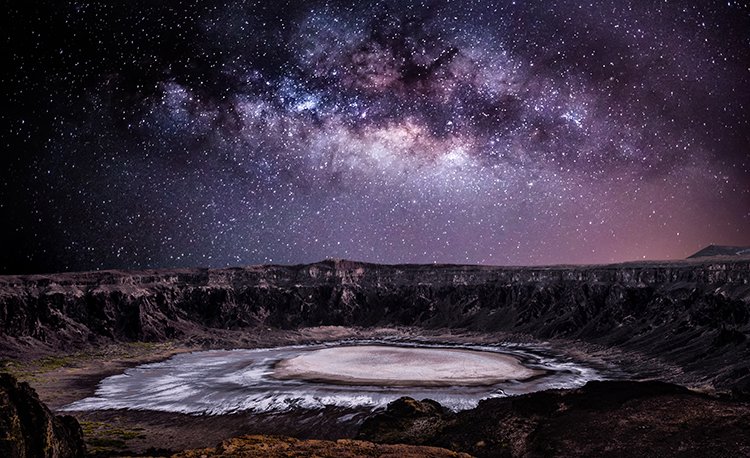 SPACE OUT:
CHASING SKIES FOR FUN

A must add on your archetypal starry “wishlist” is viewing The International Space Station, a modular space station located in Earth’s low orbit.

Depending on the level of your travel ambition you can play roulette by heading to their website and seeing where the station would be bound to be visible from that location.

Or… you can wait for the station to fly above Saudi Arabia, the International Space station is known to pass over Riyadh, Al Kharj, and Tabuk but it is to be noted that due to the constant change in the orbit these locations may vary. Due to the ability to see it pass by, the organization has made it easy to track and witness by simply plugging your desired city into their website, and it will tell you where there are sightings near
you in the next few days and for how long.

– Any time but the Summer to fully see the lights in the darkness.
– Ideally between September and April.
– Try to plan it to coincide with the new moon.

The Aurora Borealis or Northern Lights is an atmospheric phenomenon that happens because of energized light that slams into the Earth’s upper atmosphere at a great speed. With the planet’s magnetic field protecting us, we get stunning and amazing dancing lights instead.

Most of us have heard of this incredible natural light show that regularly occurs over the skies in some countries in the northern hemisphere. Although far from Saudi, it may be easier than one might think to plan a trip to see the lights at their peak.

If you don’t mind a slightly longer trip, you can head to Norway where there are many different hotels and sights specifically designated for viewing the Aurora Borealis Lights in the absolute best way possible. The Aurora Borealis is most commonly visited in Norway, but you can also see it from Greenland, Iceland, Swedish and Finish Lapland, Scotland, Siberia, Canada, and Alaska.