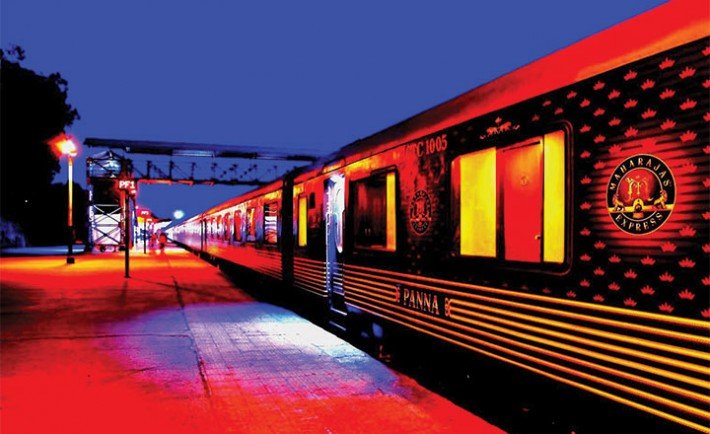 A magical journey in a mystical place.

India has been on my bucket list since forever. Every year, when we’d decide what country we’d grace during the holidays, I’d Google all the different options in the South Asian country, and then close all the tabs when we, as usual, finally settled on some part of Europe.

But then this year came along. And again, I started my fruitless research when, somehow, we said yes to India. It was a magical moment, let me tell you. Where in the vast and colorful country of India could we visit in four to five days, though? There were so many places we wanted to visit. Taj Mahal, Jaipur, Taj Mahal, the Red Fort, Goa, Lucknow, Taj Mahal, Jodhpur, aaand…Taj Mahal. We really wanted to go to the Taj Mahal.

A few research attempts and frantic emails later and my brilliant mother had the solution. A luxury train that takes you around a tour of Rajasthan with cabins you can sleep in! Basically, an Agatha Christie novel but without the dead bodies. We hoped.

There were a number of itineraries and the Gems of India suited us the most. Leaving from Delhi, it passed by Agra, Ranthambore, and Jaipur and then back to Delhi once again. Here’s a full account of our trip, with all the highs and lows.

We were limited with time, yes, but what was the point of going to Delhi and not seeing the amazing Mughal history in it? Boarding the train was at 8 p.m., so we booked a hotel room at The Lodhi, slept the night, then embarked on an epic non-stop car trip starting with Lodhi Gardens and ending with Khan Market.
It was a day spent in history and it was beautiful. By 8 p.m. we were in Khan Market and off to the Safdarjung train station we went! It was the optimal foreigner-in-India experience, with women in saris dressing you in flower necklaces and musicians lauding your entrance. A nice man then escorted us to set up chairs and explained the entire train to us. Then, it was off to the cabins. A bit small and basic, but decent, and the bathrooms were super clean. A ‘butler’ helped us with our baggage, we had a marvelous four-course dinner in one of train’s restaurants, then it was time to sleep.

If you want to take in history and relax, Lodhi Gardens is free, quiet, full of history and most importantly, not overrun with crowds.

Drummers are always the friendliest

A 6:30 a.m. wake up call, a cup of hot masala chai and an impromptu music show (as we stepped off the train) later, off we went on the arranged tour bus to the heart of Agra. We were getting closer to the Taj Mahal, and I was getting excited enough that not even the stringent security measures put me off. And then we were there. The Taj Mahal was in front of us. The train arranged the tours to be at 7 a.m. so that we could capture the monument’s reflection in the fountains properly, and look at that picture. Just look! Shah Jahan’s labor of love was even prettier in person.

Archways at the Diwan-i-Aam, Red Fort

Then came 9:45 a.m. and we were reluctantly dragged away from the Taj Mahal’s masjids and the river Yamuna to breakfast. There was a lovely set up with more music and a great view of the monument from a pavilion the train had set up for us, with a live station that made fresh dosa and had the best ginger bread pudding we had ever tried.

On from breakfast, we were taken to a marble inlay factory that services the Taj Mahal now. They show you how the intricate designs are made and teach you about all the different kinds of gems and stones used.

We were exhausted by then. It was time to freshen up at our temporary home, have lunch, and then set out to Agra Fort, where Shah Jahan was incarcerated by his son in his final days. If we were to choose between either the Red Fort or Agra Fort for a visit? We’d definitely go for Agra Fort.

Then it was time to retire once again to our beds. That were in a train. Did I mention that?

The gorgeous interior of the open Jama Masjid

Ranthambore National Park, ah, how we loved you. We got onto an actual safari boat jeep thing and went around the large nature reserve, spotting everything from Bambi to crocs and a peacock.

Our next stop was Jaipur and it takes about 3 to 4 hours for the train to reach it. The amazing staff made sure we had snacks while we played card games and a non-ending stream of beverages was made of available. Then… it was time to embark for the pink city.

The Maharaja Express offers optional excursions at a charge, but up until now we hadn’t found a reason for it.

had half a day in Jaipur, and with so much to see and buy and visit, we opted for our own guide and car. Our guide was, again, top notch. We started off in Amber Fort. Okay. So. Amber Fort… It’s gorgeous. Built by the Rajputs and one of the few forts left largely intact, there is so much beauty in that palace, it’s a must see.

Jaipur is most famous for its tchiktchok markets, where you can find saris, leather sandals and bangles at their absolute cheapest. We’re weak when it comes to shopping. Weak.

The Maharaja Express had arranged for a dinner at the City Palace, an estate in Jaipur that doubles as both the current maharaja’s living space and a museum in the daytime. There were elephants (sad ones), horses, camels, a flutist and lots of bananas. And pre-dinner, there was more dancing. There’s something about traditional dances that makes colors come sharper into focus, there’s so much beauty into it.

After too short of a period, it was time to spend the last day in our creaking but beloved train cabin. Last breakfast, last goodbye to the staff, last card game, last everything, and we left, feeling like we spent a lifetime and at the same time feeling like we hadn’t spent any time at all.

Rang Mahal restaurant on board

Bottom line? Take a trip to India. It’s one of the few places in the world where you see in technicolor.