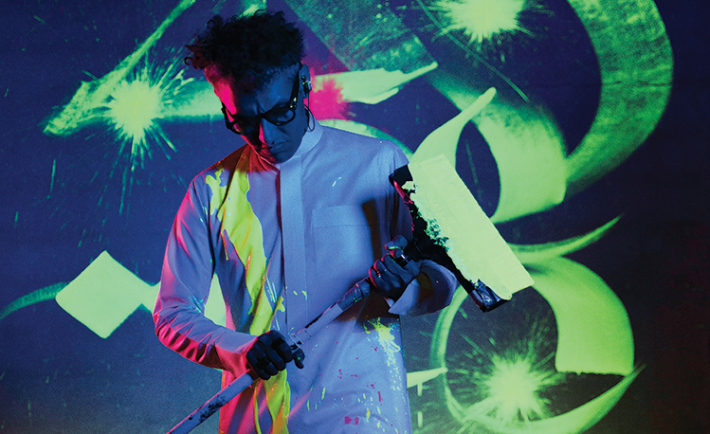 A man flitted and flounced over a canvas laid on the floor. His movements are impetuous; tempered with swift deliberate strokes. It was marked with purposeful pauses to reload his weapon of choice, a broom, no less drenched in paint as much his thobe.  He gives the impression of an artist lost in the moment, in his performance—sheltered from the cacophony of on-lookers through the music blaring through his earphones. There is intimacy in the act of creating, and Nugamshi, grants those who watch him perform privy to his thoughts and identity.

Present day Riyadh, Nugamshi paints for us one statement over another, creating converging and diverging narratives along the way. Every now and then, his face would draw a pensive stare, seemingly caught in his stream of thoughts.

Nugamshi was born in Qurrayat, and spent most of his childhood in Qassim before moving to Riyadh. His interest in calligraphy was first influenced by his teacher, Nasser Al Harbi, who also discovered his talent for the craft. Nugamshi pays homage to the tradition but pivots towards a contemporary approach to calligraphy. He positions his work at the crevice, marrying it with his love for typography. The latter, an interest taken further by Nugamshi as a graphic designer, working now as a creative director for a private company. 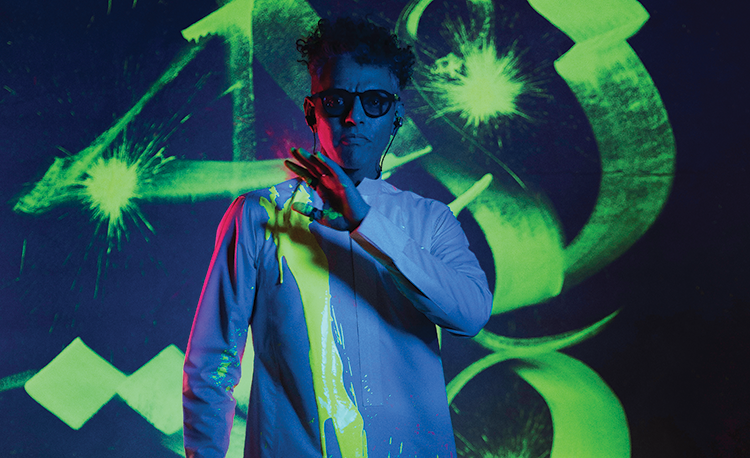 “The making of the art is akin to a dance. The words I choose are not random, they are words born out of a monologue, expressed to create a dialogue with the audience” Nugamshi

Perhaps what makes Nugamshi’s work stand out is its successful meshing of Japanese techniques, graffiti and the act of painting itself—resulting in a captivating visual and performance piece. His use of unconventional materials was part out of necessity and influenced by Niels Shoe Meulman.

“I have tremors, my hand shakes, and that is something that normally would be a disadvantage if you are working with a detailed, technique oriented craft like Arabic calligraphy. However, for me, it was not a limitation, it pushed me to go outside the normal and find my way,” Nugamshi said.

Nugamshi’s brand of calligraffiti transcends language barriers, the appeal of it is universal, which the artist attributes to the spiritual connection he creates in every performance. His favorite words to create are Her, and Nun.“whenever I perform, I am representing my identity, introducing my language, but at the same time, the experience itself is universal. Foreigners actually appreciate my art more than Arabs.” Nugamshi has taught workshops on the basics and history of calligraffiti at the YourAOK art organization in Kuwait and presented his video installations in the 2016 Sharjah Calligraphy Bienniale. He performed with his Saudi contemporaries in Washington DC last spring.

Calligraphy is an art form marked by discipline, mastery, and an obsession with perfection— Nugamshi’s departure from it extends not just in his execution but in his detachment from his art.

“I don’t believe in the past, it ties you down. I only believe in the future. The moment I finish an artwork it is no longer part of my present, and so I destroy it,” says the man, who at one point in his life impulsively chose to be homeless in Hong Kong.

Just when you thought you’ve had Nugamshi read, he throws you a curve. His artistic signature isn’t the medium and tools he chooses, but the calculated chaos and measured impulsivity that characterizes his every move. He is his art, and his art is he: bold and broad, thoughtfulness caught in reckless abandon.