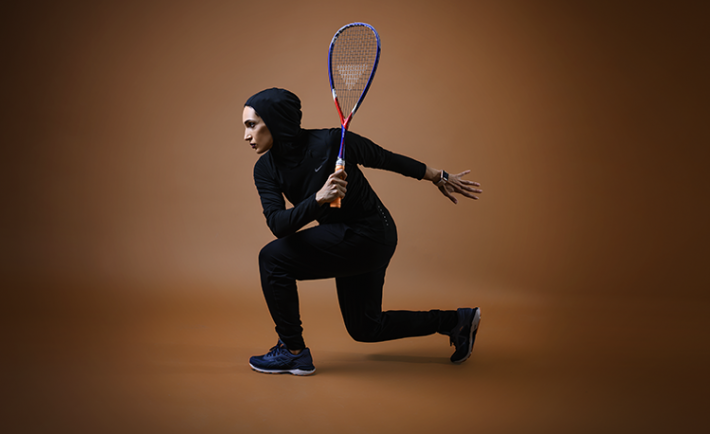 Nada stumbled upon a squash court in 2008 at her local gym. At that time, she was looking for a sport to add to her fitness routine. Little did she know that a decade later, she would become the first Saudi professional squash player in the Kingdom.

Squash ticked off all the checkboxes: she can train alone, it can burn 1,000 calories per hour, and its mental and physical intensity makes boredom unlikely. Nada went from playing for fun to becoming a force on the court when she had her first taste of defeat. “Other players didn’t want to play with me because I was a beginner, so I was determined to be better. Then, I joined the local tournament at my old gym and lost. I didn’t like it, preferred the rush of winning, so ‘become better at squash’ changed to ‘how far can I take this, how can I be the best?’ Yes, I am very competitive,” she ends with a laugh.

This jump-started her quest to learn the finer techniques and movements in squash. Spending a couple of years in France, she got her Master’s degree in Marketing while being a squash player in training. When she returned in 2014, Nada reverted to training solo due to the lack of professional coaches and limited opportunities to compete with other female players.

Training for Nada is systematic and requires discipline, a trait she values in all aspects of her life, “I have a goal-oriented training style, and I’m like that at work, too – I set goals and put in the hours and energy needed; I don’t stop until everything is right.”

In 2017, the country hosted the first Professional Squash Association tournament in Riyadh, giving Nada the opportunity to meet elite players like Nicol David. As a qualifying wildcard, she also played a match with Camille Serme (currently ranked no. 5 in the world). Earlier this year, she won the first Saudi women squash tournament.

Nada has her eyes set on the 2024 Olympics, where squash can possibly debut for the very first time. Wanting to inspire the next generation of women athletes, she hopes to open the first squash academy in the Kingdom. The fact that she can now think of these as possibilities, and the rush of millisecond wins in the box, is what fuels Nada to keep on going and maybe, one day, find herself in the box with Raneem Alweleily.