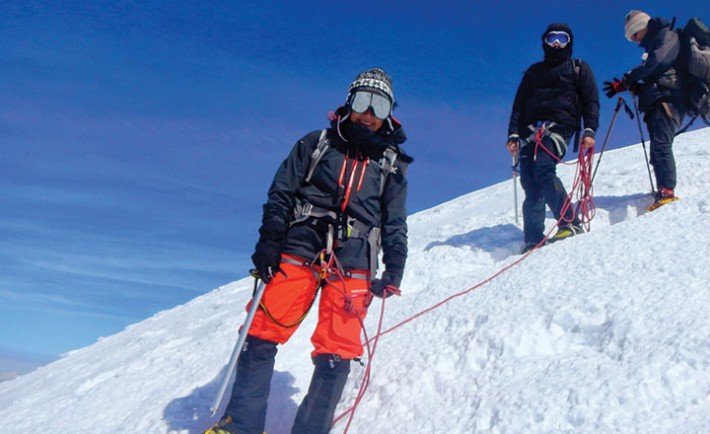 A self-professed fitness addict, adventurer and social advocate, Mona Shahab tells us why being in Saudi Arabia is no excuse to test your limits and be part of the change you want to see in the world.

Who is Mona Shahab?
A child clinical psychologist by profession and an adventurer by birth. I was born the year of the monkey to parents whose love for road trips rubbed off on me a little. When I’m not on a mountain, I’m probably planning and training for my next mountain…yes, I’m a mountain junkie at heart. Also, a tennis addict, fitness fanatic and book lover who not only enjoys running, but also finds it rather therapeutic. 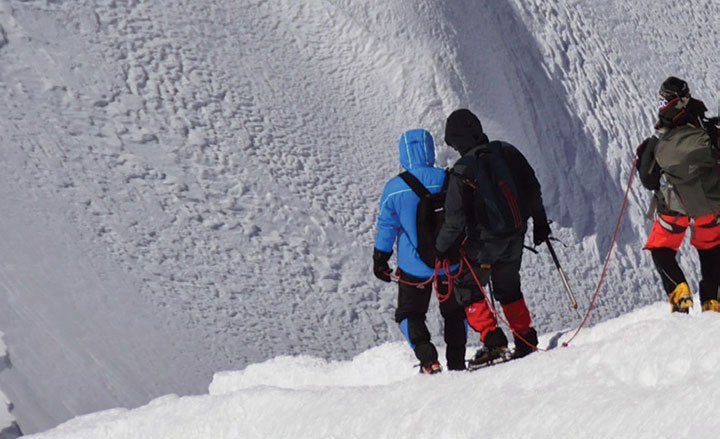 What got you into mountaineering?
It all started with an e-mail in 2006 from a good friend of mine telling me that him and his wife were attempting Mount Kilimanjaro early 2007. I fired back an e-mail saying, “I’m in!” Little did I know that my working visa in the US would not be ready and therefore, it would be impossible for me to join. To cheer myself up, I made a pact to myself that I would climb Kilimanjaro for a cause one day.

Fast forward to 2010, my friends and I are sitting in India by the sea as our feet played “Catch me if you can” with the waves and out of the blue I ask, “Kilimanjaro early 2012, who’s in?” Six mountains and counting since! 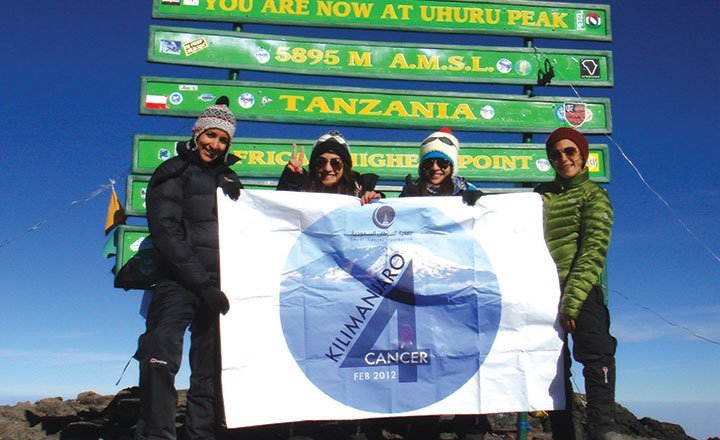 What training does climbing usually involve?
Discipline is key. I worked hard on my stamina and endurance. I continued running and spinning. I increased my interval training and Bikram Yoga practice. The treadmill became my best friend, more like the treadmill and I exchanged vows. We were committed to one another till post climb do us part. I spent three to four hours, four to five times a week on the treadmill on the highest incline, in my trekking boots and carrying a backpack filled with a few liters of water and books.

It was the perfect excuse to catch up on all the documentaries, movies and shows I wanted to watch.
For that was the only way I survived on the treadmill for so long. I must say though, it definitely paid off. 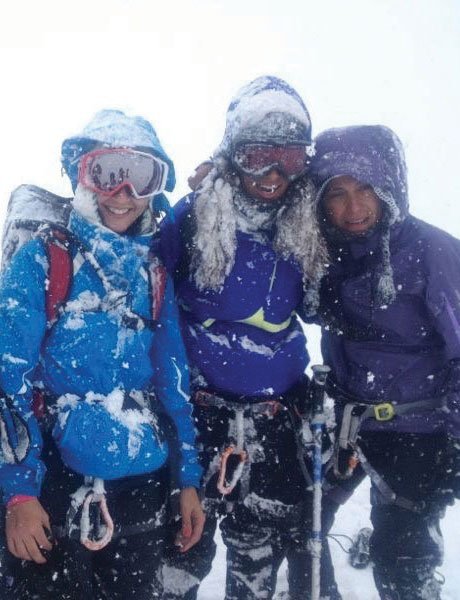 What is your most memorable climb thus far?
A very tough question that I struggle to answer. Every journey is an encyclopedia on its own. I owe so much to the mountains for they continue to teach me lessons no textbook can. I owe it to the guides, porters and Sherpa whose permanent heartfelt smiles keep me going throughout any trip. I’ve crossed paths with some of the most inspirational people who breathe motivation, determination and passion.

I made a pact to myself that each mountaintop would be dedicated to a cause. Aconcagua4Marwa is special on so many levels. I decided to climb it in memory of my friend and mountain sister Marwa Fayed. Right after trekking to Everest Base Camp together, we decided to climb Aconcagua the following year (2013). Marwa left us for a better place three days after she gave birth to beautiful Teela. 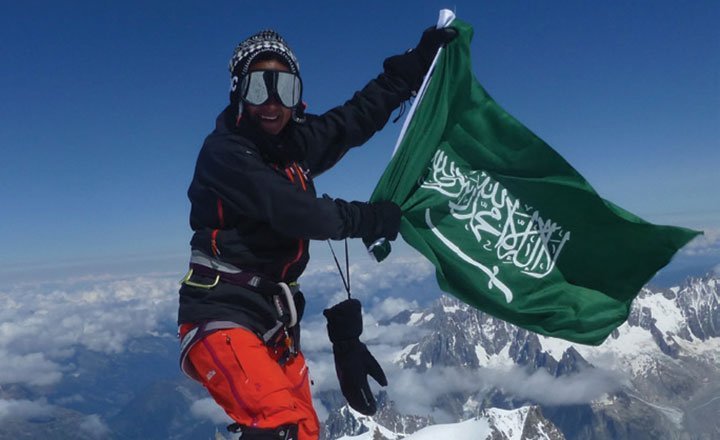 Attempting a peak in memory of an inspirational friend is on a category of it’s own so imagine having to turn around because the guide tells you “I know you can make it up, but I don’t think you can make it back down.” Those were probably the harshest words I heard in a long time. Going against my gut feeling, something I rarely do, I turned around at 6,700 meters, just 260 meters away from summit.

From being the executive manager for intercultural initiatives at Al Waleed Philanthropies to being part of the Empowerment Hub and climbing for certain causes; it seems you’re an all around social advocate. What’s your motivation?
In simple words…I owe it to my country, my parents and myself. Nothing comes in between a person and spreading smiles and sprinkling some “kindness” confetti here and there. As Gandhi so eloquently said, “Be the change you wish to see in the world.”

As a child, when people asked me, “What do you want to be when you grow up?” I’d shrug my shoulders and say, “I don’t know but I want to save the world.” (I was obsessed with MJ’s song, Heal the World, so you see where this is coming from). My world came tumbling down when an older lady told me “dear you need to be a little more realistic.” After endless “whys” to my poor parents, I decided to do whatever is in my hands to make a difference however big or small, and that, I owe to my parents. 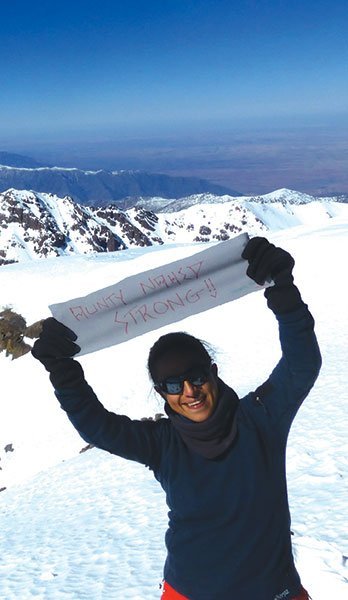 What made you and your co-founders decide to put together the Empowerment Hub?
A commitment, passion and need are, in my humble opinion, our drive. We owe it to our country, community and people. We’ve been called the “Kingdom of Humanity” for a reason and we hope we own up to that.

Thinking caps on, we found ourselves combining our passion for fitness, health and the outdoors with giving back to the community. That’s how the Empowerment Hub was born. We strive to reach the mass and work hand in hand with governmental entities on female physical education in the public system. We have many ideas cooking and we look forward to sharing them with you all soon. Keep an eye (and ear) out for The Empowerment Hub!

What advice would you give other Saudis who want to be as adventurous as you but don’t feel empowered to do so?
It’s what we make out of the opportunities that come our way. Toss the excuses out the window please! Many of us say, “I live in Saudi, there is not much I can do.” Scratch that out for you and I both know “When there’s a will, there’s a way.”

My mountaineering addiction and The Empowerment Hub chapter did not kick off when I was living in Boston for nine years. Both chapters in addition to a few others began when I returned to Saudi.