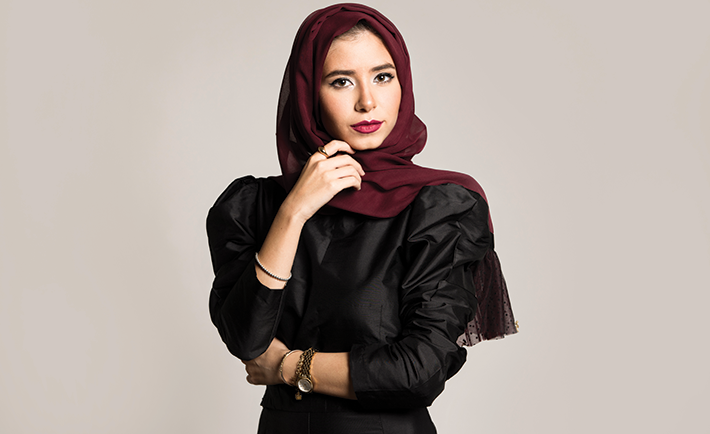 It’s not common that models walk down runways in England wearing hijabs and burkinis. But that’s exactly what happened at the first ever London Modest Fashion Week (LMFW) in February, which showcased more than 40 designers.

The event, drawing more than 3,000 people, is proof there’s a modest fashion revolution underway that’s not only taking the Middle East by storm, but the western world too.

It’s no surprise that women in Saudi Arabia are helping lead this fashion movement. Two labels based in Saudi Arabia – Foulard and the Art of Heritage – showcased their work at LMFW.

As models dressed in Sara Rayess’ designs stepped onto the runway, her heart raced from a mix of excitement and nervousness. But at the end of the show, when she emerged from backstage to walk down the runway herself, feelings of pride took over.

“We’ve wanted to enter the market in western countries and this is the first step to going globally,” said Rayess.

As a teenager, Rayess strolled through malls and browsed online to find fashionable scarves to match her outfits. She wasn’t happy with the options available and started to design her own scarves. 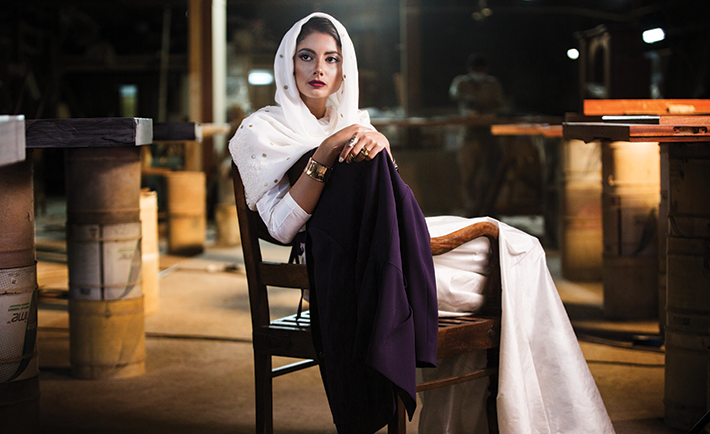 In 2011, Rayess, who is Syrian-German and was born and raised in Jeddah, founded and established Foulard (which means “scarf” in French).

Her scarf collection represents more than fashion and beauty. She weaves in her identity and religion into each piece of fabric.

“Representing my religion in a good way has always been my aim. I’ve always wanted to encourage girls to get into hijab and dress in a good way to represent their religion,” said Rayess. 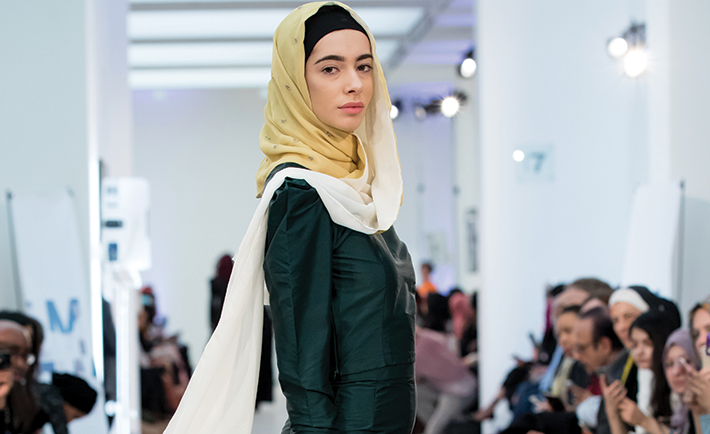 Noting that ‘modest fashion’ is less about style and more about a lifestyle, Rayess balances fashion with religion.

“I want to redefine the meaning of ‘veiled women’ because some think that a veiled woman has to dress ugly, not stylish, so I want to change this idea. Even if you wear a scarf, you can be very trendy and even go crazy with your fashion!”

At LMFW, Foulard showcased its haute couture scarves. Inspired by the texture and movement of flies, the high-end scarves are for special occasions like weddings. 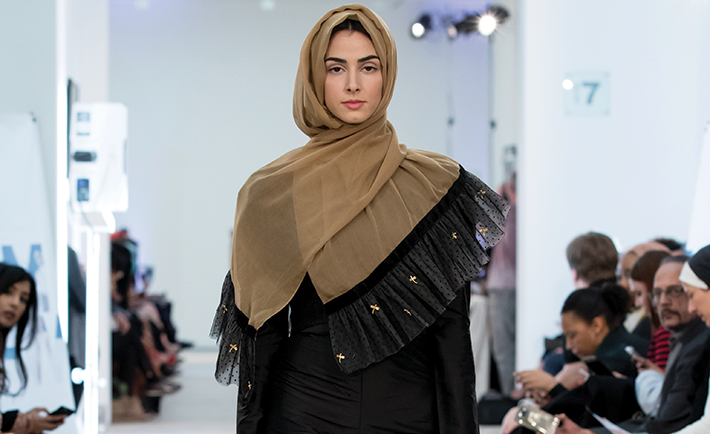 Foulard’s collection is available online and is also in a retail store in Chelsea, England. With many existing customers in the United Kingdom, Rayess’ plan is to eventually expand to North America. While scarves have been her main passion, she plans to branch out and start designing and selling her own clothes.

At the Art of Heritage fashion show at LMFW, Somaya Badr’s job was to double check the model’s outfits before they walked down the catwalk and showed off Saudi Arabia’s traditional clothes to a London audience for the first time. 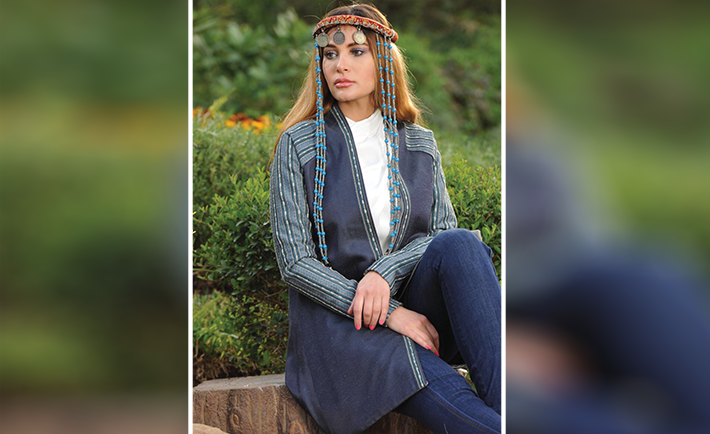 “We have some pieces that are difficult to be worn. The jackets and pants are easy but some of the dresses are difficult, so I was backstage making sure the dresses and accessories were perfect on the models,” said Badr, the general manager of Art of Heritage.

Based in Riyadh, Art of Heritage was established in 1990 to preserve the craft and textiles of Saudi Arabia. Another mission is to empower Saudi women, by showing them traditional techniques and giving them the skills to create handicrafts. 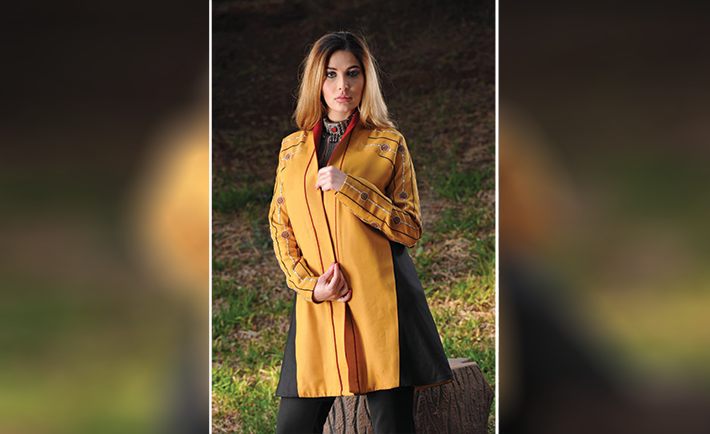 In its efforts to preserve traditions, the group is also eager to introduce those traditions to the western world. Badr explains that some are surprised to find out the bright colors and rich embroidery are from Saudi Arabia, noting many people think the traditional fashion may be black abayas.

Having already shown off the fashion in New York, and now London, the group plans to continue having their work on runways around the globe. 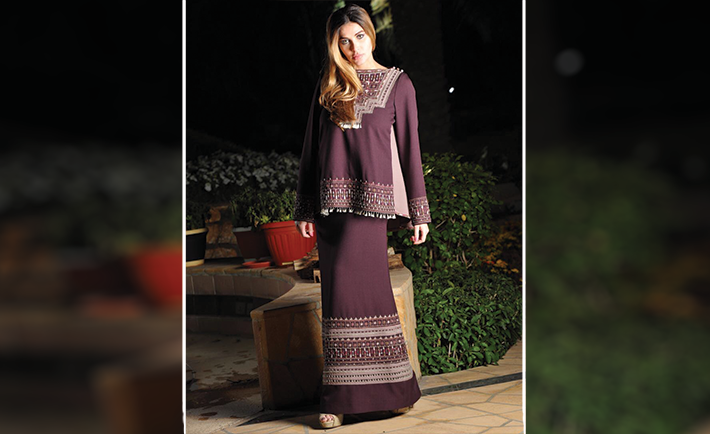 “This is the first step. Next, we want to introduce out things in Paris, Milan and other places with an interest in fashion.”

Art of Heritage showcased designs from the new spring collection at LMFW, which included traditional thobes and kaftans with a modern interpretation. Because styles are vastly different from each region in Saudi, different regions are represented in the colors and embroideries.