Awad Abu Salah is a Sudanese abstract artist based in Jeddah.

As a young boy, he grew up surrounded by creativity: his father was a well-known poet and his brother an interior designer. Abu Salah began experimenting with colors in middle school, and from there, his journey as an artist began.

In 1980, Abu Salah graduated with honors from the College of Fine and Applied Arts in Khartoum. Since then, he has had over twelve solo exhibitions and has participated in many group exhibitions, both within the Kingdom and abroad. He is also a member of several art societies, has been an art teacher for over twelve years, and has won many awards. His most recent award was received at the Souk Okaz Festival. 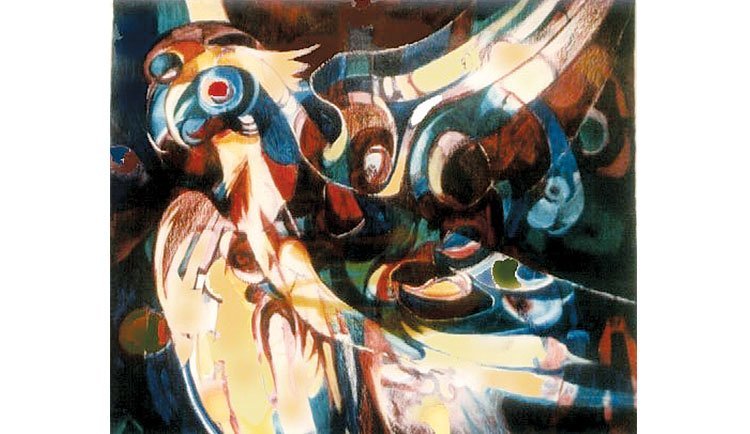 The Souk Okaz Festival is a revival of the ancient Arabian festivals that date back to pre-Islamic times. It is a competition comprising various arts including painting, poetry, calligraphy, and dramas. The painters’ task was to choose a poem by a well-known poet and produce a painting based on this poem. Abu Salah chose a poem by Mr. Ghazel Gosaibi, and produced a piece done in the impressionistic style.

When asked the name of the painting, Abu Salah replies, “The painting has no name. None of my work is named so that the person looking at it can interpret it in their own way.” Abu Salah reveals that he is inspired by life itself and that “…a true artist keeps his inspirations on file in his head, and uses them when the time is right.” He explains that he was once inspired by drops of water from an AC dripping onto an advertisement in a newspaper. This not only gave him one idea, but several ideas for future paintings which he later won awards for. “An artist has an open mind, and sees things differently than other people do. That is a true artist.” Abu Salah muses on the future of art and its role in society as he comments, “I hope people of the Arab world will take more notice of art, especially abstract art, because it is the key to civilization, culture and society. We know so much about civilizations of the past through the art that was left behind. Art is the TV screen of our time now, it will show people later what we have been doing. And I hope people will give more attention to the art in our religion. Old Islamic art was one of the most beautiful arts in the world. Our civilization had art within it, Arabic writing, before people even realized it. People should learn more and teach more about these things for the generations to come.”