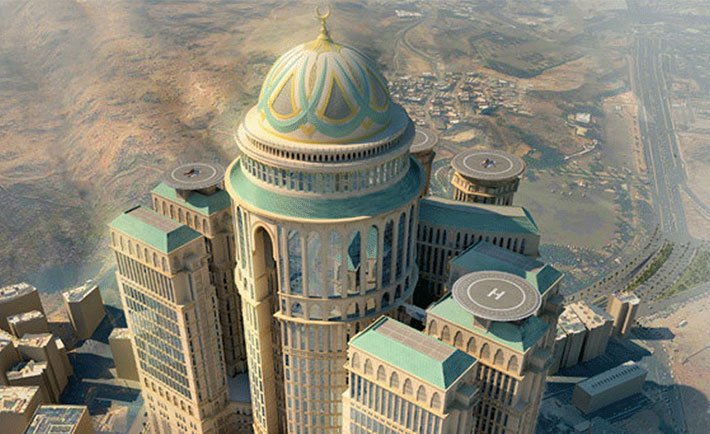 Construction projects in Makkah seem to always be going on. One immense project following the other, after all the number of annual pilgrims to the Holy City continue to grow on a yearly basis.

Now to meet the growing demand, Makkah will now host the world’s largest hotel which will be called ‘Abraj Kudai’ and here are 9 facts about it.

1. For a project of massive proportions, it will be completed in record time.

2. Spanning an area of 1.4 million meter square, the hotel will house 10,000 rooms, 70 restaurants, a shopping mall, prayer halls, and a convention center.

3. The central tower will have a gargantuan dome.

Expected to be one of the largest in the world.

4. The project is expected to cost a staggering $3.5 billion.

5. It will be just around a mile from Masjid Al Haram.

In the Manafia area of Makkah.

And the remaining 2 will be five star.

7. The four star towers will be 30 stories high.

And the five star ones, will be 45 stories high.

8. London based Areen Hospitality has been chosen to decorate the vast interior.

In the past, Areen Hospitality has decorated the interior spaces of the Raffles Palace in Makkah.

9. Designed by Dar Al Handasah, the architecture of the hotel is said to create an iconic landmark.

Carrying a semi-futuristic and sand-colored look, it looks almost like a desert version of a 1930s Manhattan high-rise.