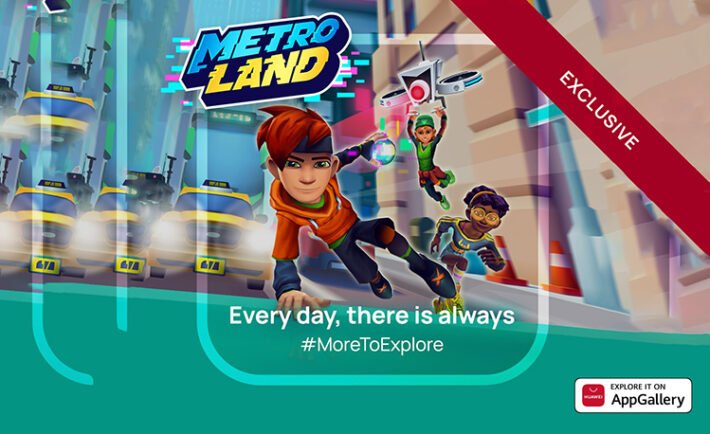 Now exclusively launched on AppGallery, MetroLand challenges players to become non-conforming, young, and energetic explorers, dashing, dodging, and even using parkour to outrun the evil MegaCorp guards. Denmark-based Kiloo has invested its extensive experience to develop this new endless runner that can be picked up as easily for five minutes of play or for several hours, at a pace to suit the user.

MetroLand, as the title suggests, has a metropolitan setting. The gameplay takes place across a number of cities and includes seven different areas that unlock as progress is made. It aims to illustrate busy, modern city life with an emphasis on momentum, speed, and excitement.

Emulating some of the most downloaded endless runner games on the market, including its own, Kiloo has taken MetroLand to the next level, incorporating new design trends, polishing the gameplay, and adding meta elements to appeal to a wider variety of user profiles.

Jacob Møller, CEO at Kiloo, said: “We have gathered all our learnings from working on endless running games over the years and condensed them into our take on the perfect, casual runner. MetroLand is instantly familiar and engaging, but still holds surprising twists and innovations for all those who are brave enough to travel to MetroLand and join our group of charismatic youngsters in their playful rebellion against MegaCorp, the antagonists of the game.”

Kiloo is aiming its new launch at a broad audience and has built infrequent updates that are themed around annual events such as Halloween, or weekly events that keep players fully engaged. Metroland also allows the characters to be sent on missions and evolve as the game is being played.

“We are very pleased to be launching Metroland to all AppGallery users across all Android smartphones. The next generation of endless running gameplay from Kiloo, the world’s leading games developer in this genre, is now available exclusively on AppGallery to all our users, further highlighting our commitment to providing our users and gamers with great content and the best games in the market,” said Lu Geng, Middle East & Africa Device Ecosystem Development & Operations Dept Director.

AppGallery, as the official Huawei distribution platform for apps and games, is pre-loaded on all Huawei smartphones. The app store is, however, also available to download for all other Android smartphone brands directly from the official website. By downloading AppGallery, gamers can join the gaming community of millions of active players and benefit from its exclusive catalog and offers.

Over the past year, AppGallery has firmly established itself as the world’s third-largest app store with 580m global monthly active users (+10% YoY). More than 187K+ apps are now integrated with HMS Core and there is an uplift of +56% YoY in-app distributions outside of China.