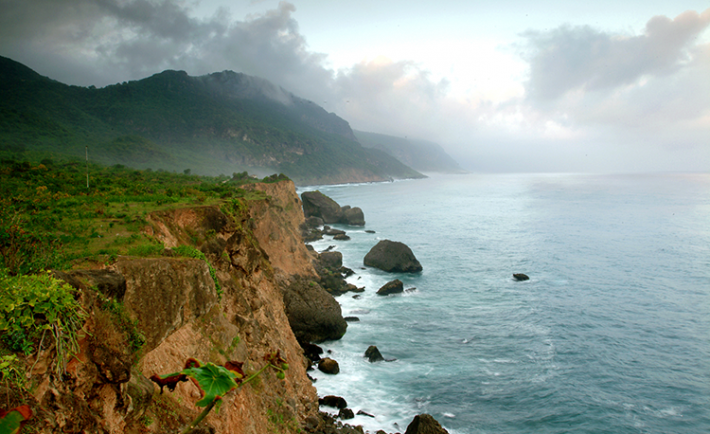 Salalah, the 2nd Largest city of Oman, is a coastal city. It is a unique place in the Arabian Peninsula. The unique climatic factors make Salalah a magical spot and the jewel of the Arabian Sea. On the northern side, the city has mountain range, with greenery, springs, and waterfalls (in Khareef). On the southern side, Salalah has pristine white sand beaches, which are sunny from September to June every year. Salalah is located in Dhofar Governorate. Also known as the perfume capital of the country, perhaps because of the frankincense trees that grow in the lush countryside around it.. . Salalah is steeped in myths and legends that date back to biblical times. In the Jebel Qara can be found the tomb of the Prophet Ayoub, better known as Job of the Old Testament. Salalah’s climate, with its Khareef (monsoon) season means that the area is rich in plants and wildlife, including species more commonly found in Africa, like leopards, hyenas, and baobab trees

Top things to do in Salalah: 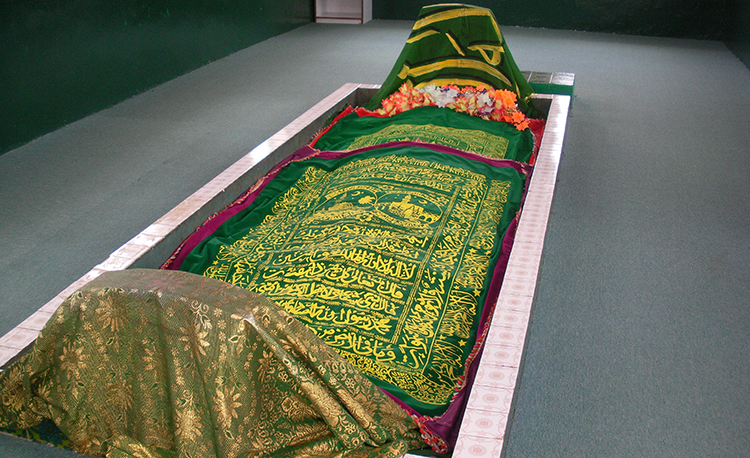 The tomb of Prophet Ayoub is on the beautiful Hills of Ittin while Prophet Imran’s Tomb is besides Haffa House in Salalah. The grave is really pretty long. Take a quiet moment and enjoy the peaceful atmosphere at the Tomb of Nabi Ayoub, where there’s a small mosque and a garden of flowering trees. 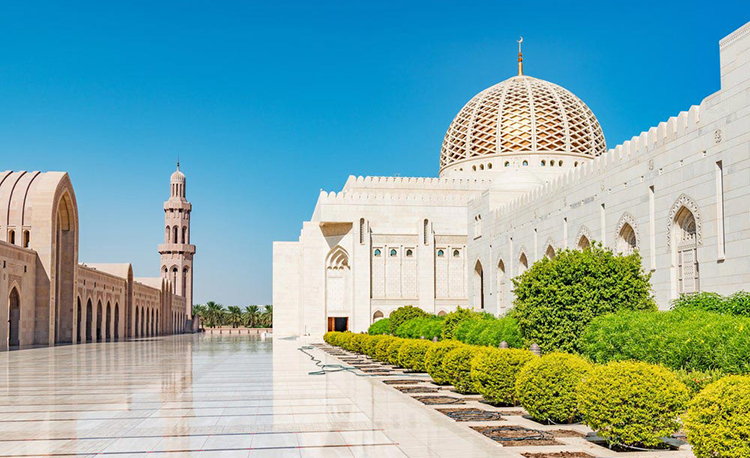 Sultan Qaboos Masjid, the largest mosque in Salalah, is located in City Center. It’s a huge masjid and a very nice architectural composition. The prayer hall is wonderfully decorated with chandeliers, green carpet and wall patterns. The mosque is named after the sultan of Oman, sultan Qaboos. 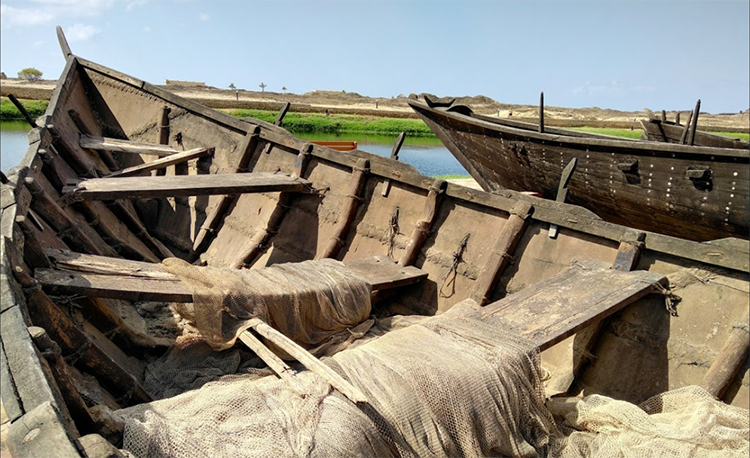 Salalah Museum is something one must not miss if you are a follower of cultures as it is the cultural centre of Salalah. The massive, beautifully built building dedicated for the museum contains and displays the Al Musnad writings, ancient holy scriptures and coins that dates back to the 11th century AD. The pottery seen here, traditional irrigation tools and manuscripts date back to the Middle Ages. Browse through ancient inscriptions and historical stone carvings, and learn about the city’s frankincense traditions in the Salalah Museum.

Location: As Sultan Qaboos St., Salalah 211
Opening Timings: Saturday to Wednesday from 7:30 am to 2:30 pm
Entrance fee: Free of charge 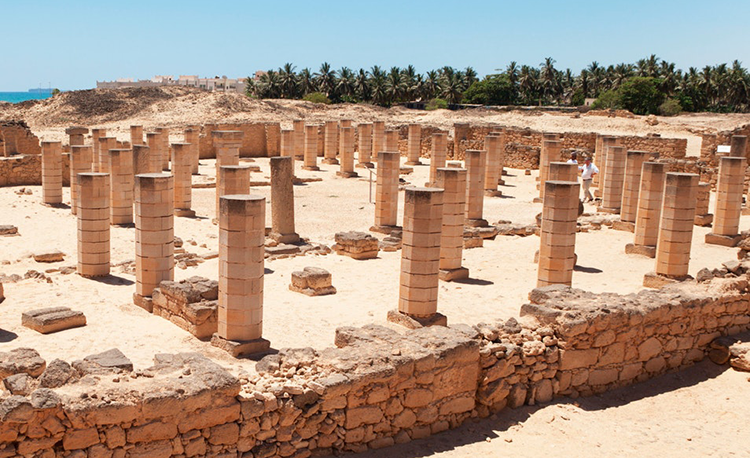 Al Baleed Archaeological Park is an open air Archaeological site across the Arabian Sea and adjacent to Al Husn Palace. This is the location of the ruins of Al Balid, an ancient city known as a frankincense trading hub and visited by both Marco Polo and Ibn Batuta. The area has been developed with footpaths to the ruins and information throughout, making it a very pleasant and educational trip for all family members. A Khor (“خور” a ravine in Arabic) also passes through the area adding to the charm., this also includes the entrance fee to the Frankincense Museum which is located on the park complex. The museum displays various artifacts discovered in Al Balid and Sumharam ruins, as well as a whole section covering Omani maritime history including beautiful models of Omani ships past and present.

This site is a UNESCO World Heritage site and a must place to visit in Salalah.

Location: As Sultan Qaboos St., Salalah 211
Opening timings: 8 am to 2 pm and 4 pm to 8 pm with a entrance charge per car.
Entrance fee: 2 R.O per passenger car 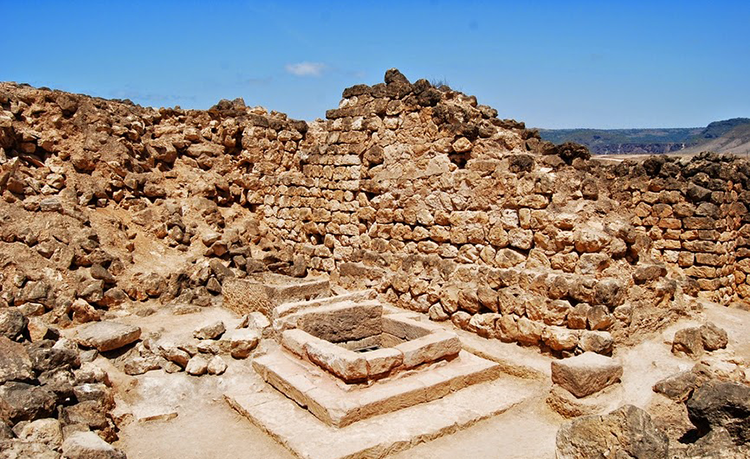 Wander around the ruins of Khour Rori, an ancient fortified port dating from 100 BC. Sumhuram archaeological site (Khor Rori) is a UNESCO world heritage site. It’s located near Wadi Darbat / Taqa. An impressive ruins of the ancient port city of Sumhuram which has been dated back to the 1st century AD. The city was an important frankincense trading hub in ancient times due to its strategic location. The site is a couple of kilometres from Taqa, which itself is about 40 kms from Salalah. A visitor fee of RO 2 per passenger car gets you access to the ruins of the fortified city, entrance to the museum and a chance to go close to Khour Rori where sea water mixes with sweet water from Wadi Dirbat at high tide. In Khour Rori lie the ruins of the palace reputed to be that of the Queen of Sheba. 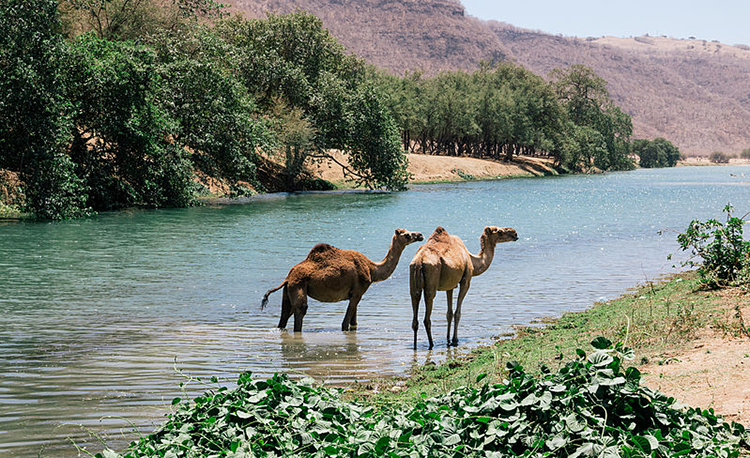 See waterfalls, caves, lakes, and mountains at the Wadi Darbat natural park, around 20 km east of Salalah. Salalah  is blessed with this natural park where you can experience spectacular views of waterfalls, lakes, mountains, caves, lush green vegetation, and plenty of wildlife. The 100 metre tall waterfall is a treat to watch that has been bestowed by nature. Make sure to visit during Khareef to see the countryside at its most green and lively. Wadi Darbat (Darbat Valley) is the most beautiful and scenic spot for the mountain and spring lovers in Dhofar Region. The place offers everything that is needed for a memorable family day. It is one of the most visited valley in Dhofar. By no means, one should miss the boat ride / paddling / kayaking on the lake at Amazingly beautiful Wadi Darbat. 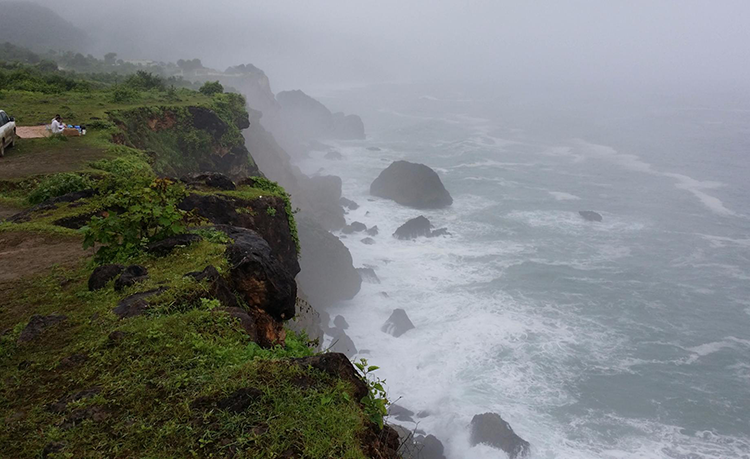 Many people come to Salalah Anti-Gravity Point to see their cars going up the hill at Neutral gear (without any acceleration). This is a really amazing experience and a unique one. The car can move at a speed of more than 40 to 60 kilometres per hour without any acceleration. This point is near Tawi Atair / Mirbat and you can visit this place while going to Mirbat. One can also plan to go to this place after visiting Wadi Darbat and driving for approximately 20 to 30 minutes on the Eastern side. 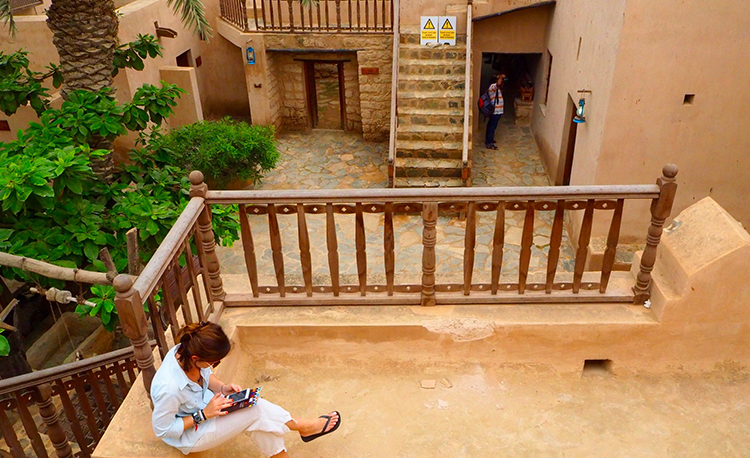 It is the most popular castle to visit in the region of Dhofar in the South of Oman. Taqah Castle is located in Taqah, an old city 33 kilometres east of Salalah.  it used to be a private residence for a tribal leader, Sheikh Ali bin Taman Al Ma’shani –  the grandfather of the mother of Sultan Qaboos. Taqah Castle became the property of the government in the first half of the 20th century during the times of Sultan Said bin Taimur, the father of Sultan Qaboos. During the 1960s the castle was expanded by adding the outer wall and its four towers. The castle was more recently renovated during the times of Sultan Qaboos and reopened as a museum in 1994. Taqah Castle is located in the heart of Taqah city, you need to drive east out of Salalah to get to it.

9. Experience Sunset from the Cliff at Taqa 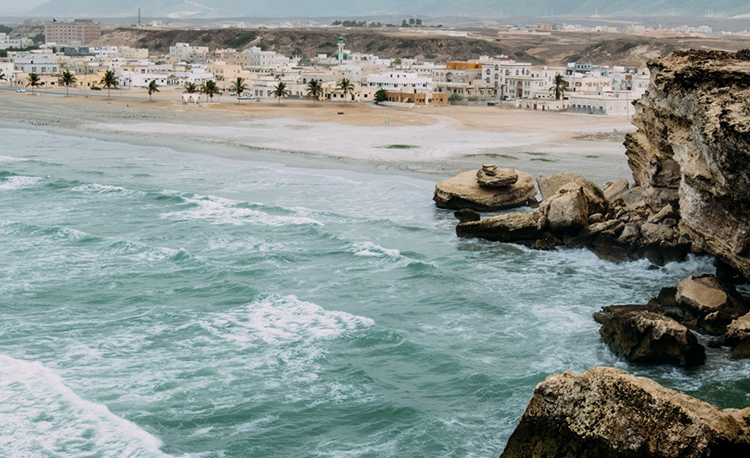 Park your vehicle at the top of the cliff, put the mat and chairs and experience an unforgettable sunset from above the Indian Ocean and white sand shore, with a great view of Taqa City.

Location: Approximately 35 kilometres on the East of Salalah, Taqa is before the famous Wadi Khareef, Anti-Gravity Point, Tawi Atair Sinkhole and Mirbat. 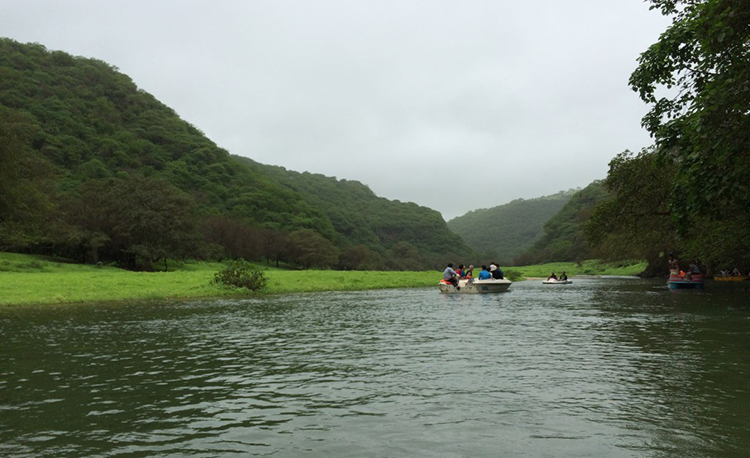 Wadi Sahalnoot is just 15km from Salalah and it gets resplendent in greenery during Khareef every year. The valley has impressive and beautiful natural scenery. While you drive on the meandering roads of this valley you can see greenery all around. The roads are narrow with sharp bends so one must be cautious while driving. 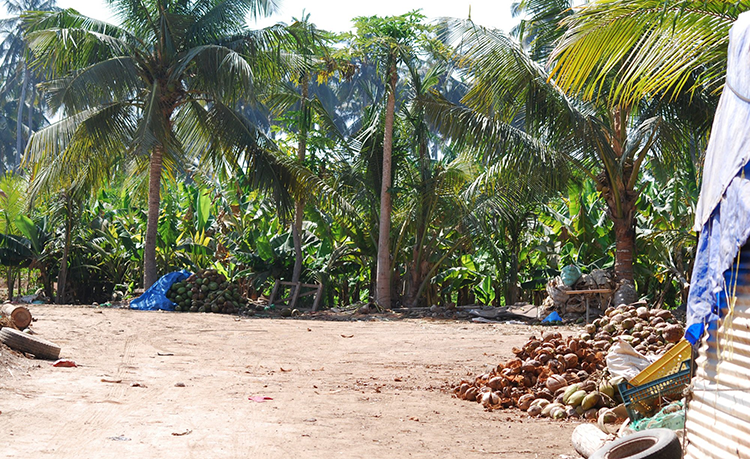 This is the main market in Salalah and the place for buying traditional Omani items from clothing to gold and silver handicrafts, and of course a wide variety of frankincense! If you are here during the Salalah Tourism Festival, you may also see a traditional Dhofari dancing performance. It is also known as Al Husn souk. 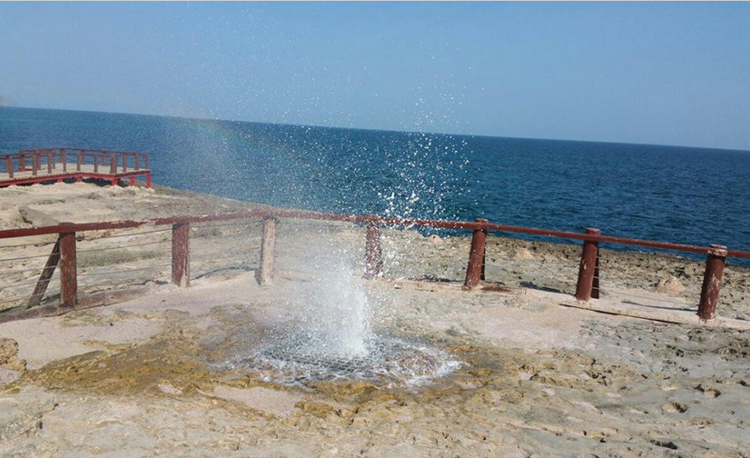 The stunning blue waters and crisp white sands of Mughsail beach make it Salalah’s biggest attraction. This beach is around 57km drive away from Salalah, and you should take a 4×4 to enjoy off-road stops along the way. The stretch of mountains on both sides of the route offer a spectacular backdrop. The beach is ideal for barbecues and picnics as there are some hut-like sitting areas onsite.. It has beautifully white sands, and crystal-clear waters. What adds to the beach’s beauty is the green mountain that surrounds it and the natural fountains that burst out of its rocky edges. 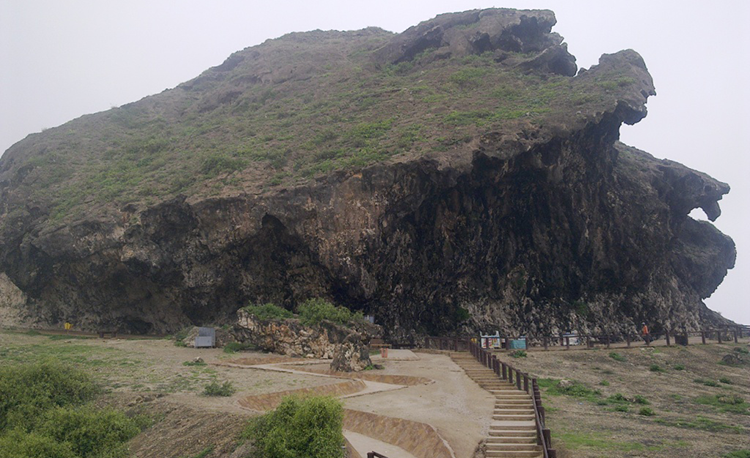 The Marneef Cave is located near Al Mughsail Beach in Salalah. The charm of this place starts with the surrounding mountain that has several benches for tourists to enjoy the marvellous view of the beach and the blowholes – Al Marneef Blowholes, which are also called Al Mughsail Blowholes or Fountains. These holes in the ground are known to be sea caves, through which sea waters come, creating beautifully high fountains 30 metres high that splash water around them. Between the white sandy beach, the magnificent mountain, the deep cave and the charming fountains, Al Marneef Cave is the perfect escape for all nature lovers. 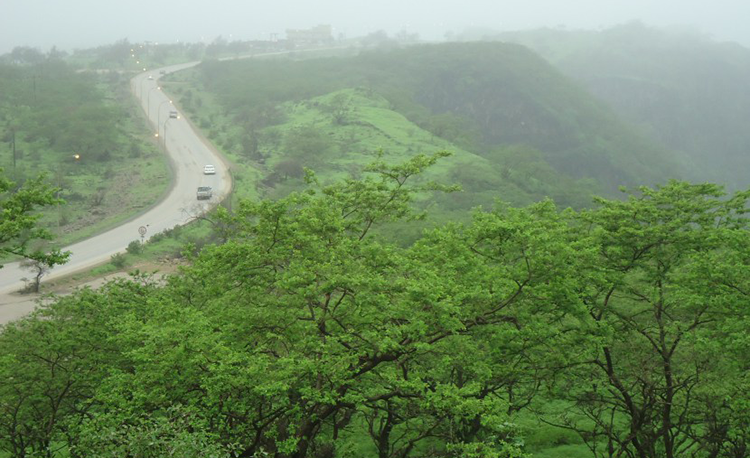 Just outside Salalah, Ittin has many attractions. Apart from the Ittin Cave, which is located above a picturesque mountain, and Ayn Jarziz, the newly built Ittin walkway is the area’s newest attraction. The Ittin Park also attracts tourists for its lush greenery. Just a few minutes’ drive There is a lovely walkway Ayn Jarziz which is the central attraction within this lush wonderland, popular for its verdant greenery. Ittin is located close to the airport and a well-liked attraction amongst visiting tourists. from the Salalah airport, Ittin is a must visit area.

Salalah is known for its unique Khareef (monsoon) festival, in which the whole city turns green and attracts visitors from all around the world. Nevertheless, there is more to this mind-blowing gem in terms of natural beauty and  architectural wonder. The Salalah Festival lasts from July to September every year. It happens when the temperature drops to 23 degrees C (73 degrees F), while the rest of Oman and the Gulf countries are boiling. That causes lots of rain which turns Salalah into a complete green area. Omanis prepare some cultural and traditional shows to celebrate this monsoon season and to welcome tourists and visitors from all over the world.

CURRENCY
The currency of Oman is Omani Riyal (OMR).One riyal is made of thousand Baisa.

LANGUAGE
Arabic is the official language and the most spoken one.

POPULATION
The total population of Salalah is around 163 140.

AVERAGE CLIMATE AROUND THE YEAR