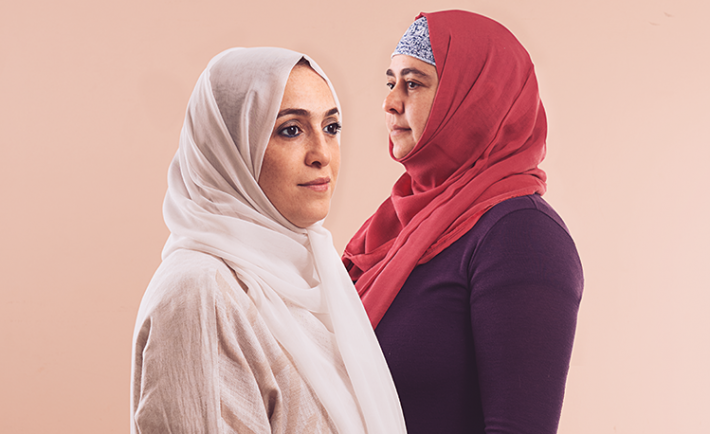 Dania had the planning skills while Danya had the creativity. Toegther they started Eggdancer, a production company that produced their passion project, A Silent Revolution.

After getting a degree in Math, Dania obtained her Master’s in Management Information System and then started working at Dar Al Hekma University, which led her to discover her passion for project management. As she was planning to start her own event management company, Danya reached out to her about starting a production company. The two had known each other since 10th grade.

“We complemented each other’s personalities, and it worked for us – Danya has the creativity it takes to be a director, and I had the planning skills to be a producer. It made sense to join forces,” Dania says.

While they have  accomplished a lot in the past decade, Dania admits it’s easy to be frustrated and demotivated when necessary support in their industry is lacking, especially when they strive to produce important films, such as their documentary A Silent Revolution/Rise.

Recently, they had the opportunity to screen the film for a limited time at the King Abdullah Economic City, and the feedback they received from the audience inspired Dania and reminded her of the reasons she is doing this work. “Any work that affects people positively, even adding a bit of knowledge they didn’t know about, or giving them motivation to continue what they’re doing, makes me happy,” she says. “I want the film community to come together, work as a team; we have to create our own umbrella, and support each other.”

Danya graduated with a degree in English literature and linguistics, but has always wanted to be in the film industry from a very young age. It was a different time back then – she was told that film could be a hobby but one that doesn’t have a real future. But she pursued her Masters in Counseling Psychology at the University of San Diego, California, and then eventually got a graduate degree in filmmaking from San Diego State University in 2004.

In 2006, she started Eggdancer Productions with Dania Nassief, and together, they produced Khosh Al Matbakh, a cooking show, in the hopes of selling it to a broadcaster, but that didn’t pan out. Soon after, they started working with international companies on commission, like the BBC and The Travel Channel. They also took on corporate work, including documentaries and TV shows such as Akla W Hekaya on Saudi TV, and Fattabeouni on Iqra.

“One of our challenges with filmmaking is financing,” says Danya. “We like to do documentaries that tell authentic stories of real people, but those aren’t seen as valuable or sellable as other film genres.”

One of their passion projects was A Silent Revolution/Rise, a groundbreaking documentary film they worked on for five years, that tells the story of women pioneers in Saudi Arabia. The film not only sheds light on the plight of Saudi women in the past few decades, it is also an important historical record, especially as there isn’t much that exists in archives of Saudi women. “We have to start telling and documenting our stories now – these will be reference points for future generations,” Danya explains.