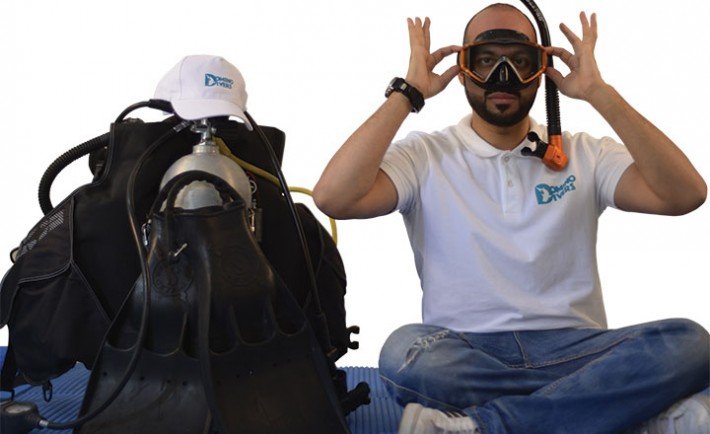 Saudi team, Domino, made up of Hussam Shukri and Mariam Ferdous is the first from the Kingdom to conquer the Arctic Circle.

The Arctic Circle is an imaginary line that passes through parts of America, Greenland, Canada, Russia, Norway, Sweden, Finland and Iceland. Shukri and Ferdous took it upon themselves to embark on this one of a kind journey and make Saudi history.

Shukri originally works at the Human Resources Development Fund as an employment guidance lecturer; he got his diver’s license from the Professional Association of Diving Instructors (PADI), while Ferdous is a pediatrician who took up the hobby of diving as a way to relieve the stress of studying. She explains, “The life you see underwater is very relaxing, there is so much beauty underneath. However, there are still rules that you have to follow, because the smallest mistake can cost you your life. This is very similar to the medical world since a doctor’s error can be fatal.”

The team had initially planned on diving in the North Pole, but strict regulations and licenses they hadn’t issued, made them take a rain check on that and instead dive in Karelia in Russia, part of the Arctic Circle, as a preparatory step. Even though their families supported their task, they were still met with some rejection from other people. Ferdous elaborates, “Like every new experience, this one was not fully embraced by some people especially on social media.”

Signature move of the team.

It goes without saying that their journey was a tough one. Some of the hardships they faced included being rejected for the Russian visa three times, flight delays, and of course the severe weather conditions. Their training center, Vicaar, is the only one qualified to train divers of the North Pole and oversee such trips. Their training program was strenuous mainly because of the freezing water that engulfed them in the special diving suits they weren’t used to yet. This caused Shukri to fall ill and take a break until he got better.

The team is all set to take on their next challenge of diving in the North Pole. They have prepared marketing plans for companies that would be willing to sponsor them and help them become the world’s first duo to dive into the North Pole. Their future adventure will definitely make their country proud.

Shukri elaborates, “Ice diving is hard but fun because of the challenge it represents. It reflects human perseverance and determination.” By taking on this endeavor and succeeding he says, “This is our gift to the young people of the Kingdom. Through our journey, we have proven that we are all capable of overcoming obstacles and reaching our goals no matter what. We have proven to the world that we are capable of setting goals and reaching them.”