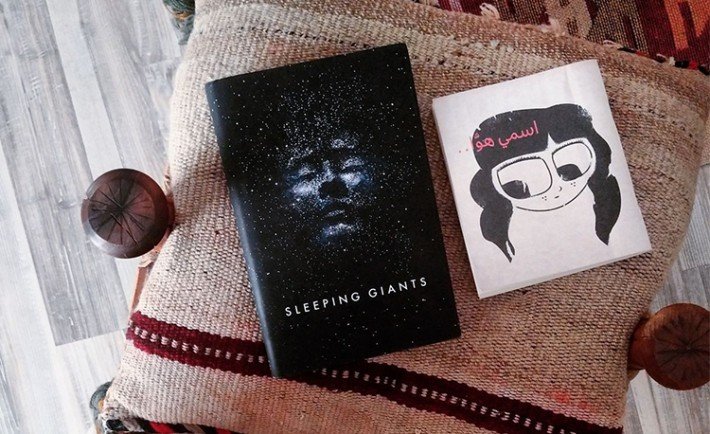 “You have to understand that this flies in the face of everything we know about American civilizations.”

One of my July reading highlights was the #ReadSleepingGiants read-along that I hosted on Instagram from the 20th – 25th. Read-alongs are a fun opportunity for bookworms to read the same book together.

I read Sleeping Giants in two days; in fact, I flew through the half the book in my first sitting. After I read The Martian and The Long Way to a Small Angry Planet, I decided to occasionally visit the scifi genre. The former books both have a kind of warmth that Sleeping Giants differs in with its dark and cold force within the story. Sleeping Giants recently snagged a movie deal, so it was also a priority read.

Sleeping Giants starts with a little girl, Rose, who falls into the earth and lands on a giant metal hand. As an adult Rose is a scientist who is assigned a project that investigates the origins of the mysterious hand. This is where the adventure unravels and things get out of hand (pun intended).

Without further ado, here are top reasons you should read it too:

Check out the book on Goodreads.

Buy the hardback on Book Depository for $16.33 with free shipping.

BOOK REVIEW featuring Donuts!! SLEEPING GIANTS by Sylvian Neuval – Quick verdict: Read it! #ReadSleepingGiants was such a fun readalong. It took me two days to finish Sleeping Giants, and the I flew through the first half on the first day. I love scifi and fantasy books, and this one did NOT disappoint! . Here are TOP REASONS you should read it: 1. The interview format is quite interesting. Some people don't really enjoy this format, but personally it's super refreshing because it's easier to acquaint with the characters. That being said, knowing the story just from the perspective of documents and records kinda made me wish I could have read the intense action parts. BUT – the interviewees often describe things enough to make you feel involved. 2. The story was the right kind of fast paced. After the first few chapters you just know that every interview adds something to the storyline and plot. This was very intriguing to see unfold because I started anticipating the plot advancements based on who was being interviewed! 3. The story is kinda super epic. 4. There's a LOT of power play and conspiracy. In fact, from start the finish the book basically exposes how fluid the the power hierarchy can be. 5. Some of the dialogue is super hilarious. At least to me! 6. There's going the be a movie. THERE IS GOING TO BE A MOVIE!!!!! My extreme excitement is justified because this book can be a blockbuster if done well. So yep, definitely pick this up! I wish I could say more, but I don't want to spoil anything. Will you read Sleeping Giants?! If yes, use #ReadSleepingGiants or tag me in your photo to chat about the book!