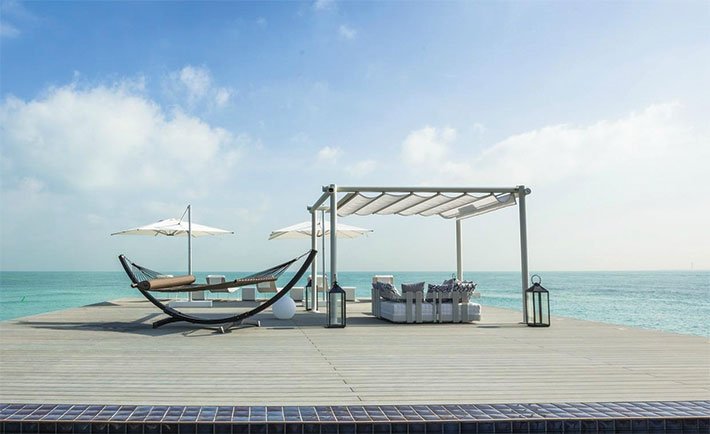 Zaya Nurai Island
Zaya hospitality recently opened their flagship resort, Zaya Nurai Island in Abu Dhabi. The resort consists of 32 boutique villas as well as 23 residential villas and beach estates. It’s a 10-minute drive from Saadiyat Island and features a beach, outdoor pool and gym. In addition, free access to Wi-Fi is available in the resort.

Porsche Panamera to Greet VIP Guests
Following the partnership between SAMACO Automotive- Porsche Division and the Saudi Private Aviation, VIP guests arriving at the private aviation terminals in Jeddah, Riyadh, Dammam and Madina will be chauffeured by either a Porsche Panamera S or Panamera 4S. This partnership aims to provide VIP guests with a high level in both comfort and performance.

Ramadan in Paris
Le Royal Monceau Raffles Paris offers great opportunities for Muslims during Ramadan. The hotel has embraced Ramadan and is extending services through Arab hospitality by providing some of the favorite Middle Eastern cuisines for breakfast and suhoor. Nuts and dried fruits are provided during the non-fasting times as snacks as well as Arabic television channels in all rooms and suites.

Stars on Board (Starting from SR 2,820)
A five-day cruise in Europe starts from Rome, Italy visiting Marseille, France then to Barcelona, Spain and ending at Genoa, Italy. All Star concerts are free of charge to guests and the stars include Najwa Karam, Nancy Ajram, Ma Fi Metlo, Im Hussein and others. The rate also includes meals in the complimentary dining venues, accommodation, on-board activities and evening shows.
Web: portfoliotravel.net

Flynas Launches Daily Flights Between Riyadh and Cairo
Flynas announced that starting April 29 it will operate daily between the two capital cities making it a major player in connecting the two countries.

Switzerland Attracts GCC Travelers
Switzerland aspires to attract more travelers from the GCC. It offers them a brand new experience, The Grand Tour of Switzerland, where tourists will visit the most cultural and scenic places over there. Switzerland has attracted a high number of GCC visitors in 2014 and aims at attracting even a higher number this year.

Air Arabia introduces Airewards
Air Arabia recently announced the introduction of their new loyalty program, Airewards. Air Arabia is the first low-cost carrier to introduce a loyalty program in the MENA region. Joining Airewards is free and open for everyone and members can earn points with each flight they take with Air Arabia.

Non-stop Flight from Jeddah to Al Ula
Saudia Airlines recently announced that flights to Al Ula from Jeddah are now available non-stop. Al Ula is located    approximately 380 kilometers north of Madinah. The city is known for Madain Saleh, the Nabataean city of Hegra, which is the first World Heritage Site in Saudi Arabia as announced by UNESCO in 2008.