There’s been a murder in the house of Al Dahaleezi family and things are not what they seem and everyone in Al-Balad is a suspect.

Welcome to BAIT AL DAHALEEZI, an immersive theater where the audience is part of the performance, stuck in a strange world where mysterious things keep happening.

The Jeddah Season Festival visitors have been offered an unworldly tour to the first of its kind immersive theater experience in Al-Balad where they are summoned to the Bait Al Jamjoom to solve a mysterious murder. 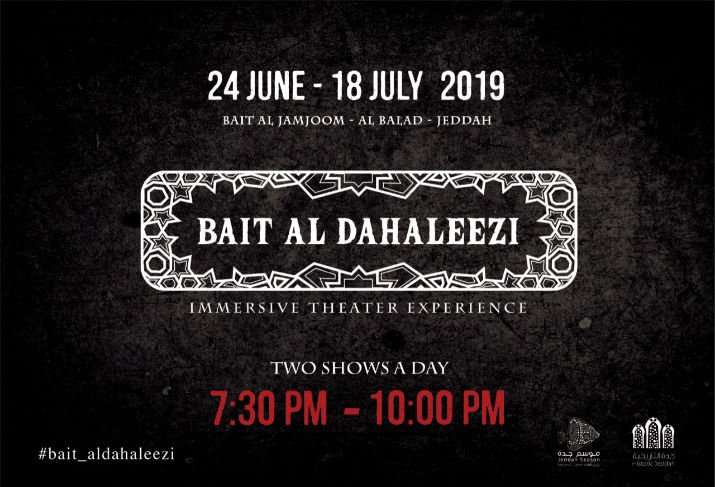 Bait Al Jamjoom in Al-Balad is a 200-year-old house and UNESCO heritage site that’s a perfect spot to create the fictional Hijazi family with a mysterious past.

The story of Bait Al Dahaleezi has been developed by Al-Balad’s cultural historian and writer, Dr. Lamia Al Baeshin who debuted as a scriptwriter for this project. The hardest part she says was to craft the script in a way that it suited the venue. Eventually, she had a map of the house and started writing the script with the house in mind, but when the actors showed up for rehearsals, it got difficult to coordinate. They had to synchronize the entire play and fix the loose ends. The production design was put together by the renowned interior designer and board member of the Saudi Art Council Nawaf Alnassar. The costumes for the crew were designed by Arwa A. Abdulatif and the direction is brilliantly executed by the award-winning Saudi-born American Todd Albert Nims.

The dramatic artistic work of the Hijazi tradition was managed by Shahad Alhazmi, the theatrical track manager of Sidra Event Management. The cast consists of local talents who have previously performed in cafes and have never acted before in any play. They were given training for over two months with a professional acting coach from Italy, Dr. Qassim. The results have been spectacular and you have to see it for yourself.

By promoting local tales and folklore, Bait Al Dahaleezi is providing not only a local platform for local talents to be acknowledged, but it’s also joining the chorus of this new wave of interactive theatre.

After being held in New York and London, immersive theater experience is on the rise in the Kingdom and Bait Al Dahleezi is giving the audience this one of a kind experience. According to Todd, every strong creative ecosystem needs theater and it’s the most human form of expression.  “Theater forms life long bonds, provides writers and directors a way to physically interact with their creations and constantly tinker with them,” says Todd

Regarding working with the creative team, Todd says that he’s so thankful to work with all the local creatives on this project. Specifically, Nawaf Al Nassar and Dr. Lamia Baishin.  They both were with Todd from the beginning and we bounced between the writing and interior design to develop this immersive experience in an organic, beautiful way. The Bait Al Dahaleezi team are grateful to the Ministry of Culture, Sidra Event Management, and Jeddah Season for making the idea behind Bait Al Dahaleezi come into existence and for their support on this project.

Enter an atmosphere filled with a colorful cast of characters that will frighten and delight. Test your courage and wits. Will you unravel the mystery of the abandoned house?