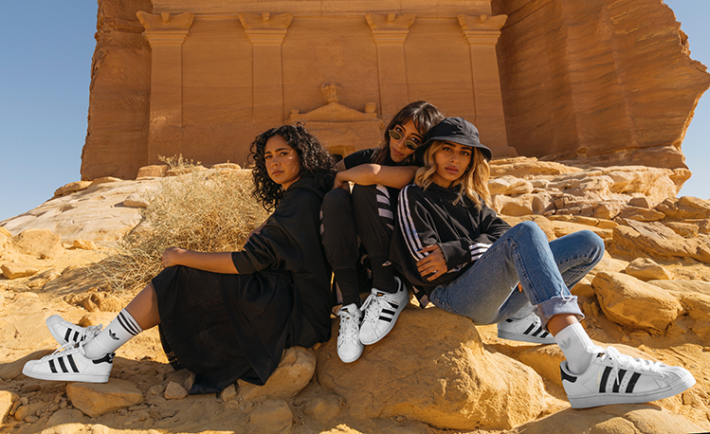 Continuing the unmatched legacy of the iconic Superstar sneaker, Adidas Originals teams up with four Saudi female creators to celebrate 50 years of changing the game on the court with its ‘CHANGE IS A TEAM SPORT’ campaign shot in the centre of Saudi’s crown jewel, Al Ula.

Having graced the feet of teams and crews over time, the Superstar sneakers have cemented their iconic status in time, connecting people together across the pillars of ART, MUSIC, FASHION and SPORT under one key message: CHANGE IS A TEAM SPORT.

Staying true to the spirit of the campaign by bringing together four Saudi female change makers for a photoshoot highlighting female empowerment and the strong change they each bring to the local scene. The photoshoot features designer and creative Alaa Balky, Arabic rapper Aseel Saraj, fashion blogger Jory Al Maiman and avid skateboarder and actress Sarah Taibah all shot against the historical and cultural backdrop of Al Ula heritage site which evokes a promise of change for the kingdom.

The entrepreneur is known for her love of art who shines a spotlight on Arab culture to the world and beyond. A true visionary, Alaa’s style of art acts as a bridge between traditional and modern Arabic culture.

Aseel is a Saudi bred hip hop artist and songwriter, known for her rap video that celebrated the lift on the driving ban against women in Saudi Arabia. Rapping only in Arabic, her style brings a new and fresh understanding to the hip-hop culture in the region.

Fashion enthusiast and blogger, Jory is one of the most influential social personalities in Saudi. Her unique style brings to life her own take on modern Arab fashion while also shining a light on local designers.

An artist and actress by day and an avid skateboarder by night. Her story telling, either in filmmaking, writing, or illustration, amplifies femme voices and tries to push her society to express themselves vulnerably in alternative ways.

Bringing together all these inspiring women to deliver an undeniable message to life: Change Is a Team Sport. The new Superstar sneaker is now available in stores and on Adidas.ae starting February 13th across the GCC.

Inspired by the rich sporting heritage of Adidas – one of the world’s leading sports brands and a global designer and developer of athletic footwear and apparel – Adidas Originals is a lifestyle brand founded in 2001. With the Adidas archive at its foundation, Adidas Originals continues to evolve the brand’s legacy through its commitment to product innovation and its ability to filter the creativity and courage found on courts and sporting arenas through the lens of contemporary youth culture. Marked by the iconic Trefoil logo that was first used in 1972 and championed by those that continue to shape and define creative culture, Adidas Originals continues to lead the way as the pioneering sportswear brand for the street.