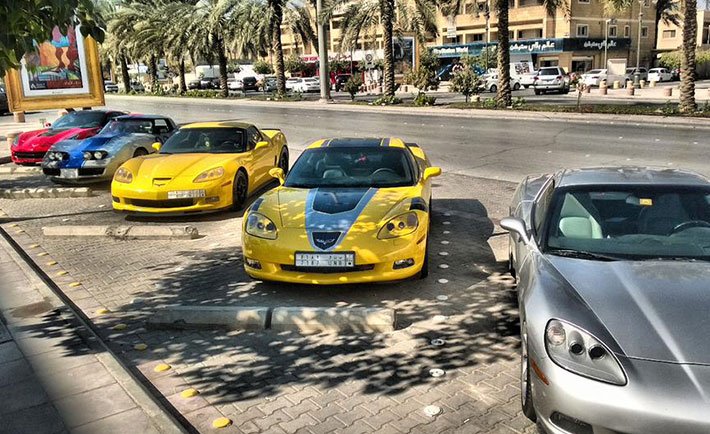 A long time ago, merchants and nomads would measure their strength and capabilities with the strength of their camel or horse in mind. Similarly, in today’s world, our cars hold a very important place in our lives.

Cars are important for men in KSA not only for transportation reasons but also for the sense of community they achieve among owners of the same car type. This is what car clubs represent, a form of togetherness and unity.

Here’s a list of 7 Sports Car Clubs in KSA that you should know about.

The Porsche Club brings together people who love Porsche cars. Owners of Porsche cars can join the club in order to attend events, Track Days (driving in track circuits), and Motorsport events like the Jeddah Race of Champions and Porsche Club Sprint Challenge. Members can also receive technical advice. Those who don’t own Porsche cars, but are actively looking to buy a Porsche, can join the Porsche Club and gain access to events in order to meet and interact with current members. Members also enjoy discounts for exciting events like Classic Car Shows, Motor Museums and Car Exhibition at the Jeddah Expo Centre.

SCC was established in Riyadh by a group of enthusiasts, including current club president Eng. Thamer Al Suliman Al Hamdan. And with their hard work and effort the club expanded to all over the KSA (Central, North, South, East and West). All under the name of Saudi Corvette Club. The members can participate in sports or social activities. The sports activities include racing competitions like Drag Racing. The club encourages members to be socially responsible by participating in its blood donation campaign, winter clothes distribution campaign, International Day for the Elderly, and Orphan Day.

One of the largest car clubs in the Kingdom, the Mustang Club was founded in 2009 for owners of the Mustang cars. Those who want to own a Mustang can also join the club to get started on their journey towards being a Mustang owner. Members receive discounts for spare car parts and maintenance, and can also spend time at the club centre. The club promotes safe driving and organises activities in order to socially reflect a responsible attitude.

Pictures of the clubs activities can be found on the Facebook page for Al Ghassan Motors.

This Italian car is very famous for its sleek designs and impressive engines. The Lamborghini club, based in Jeddah, is very active throughout the year and has a strong presence on Instagram. Members are owners of the esteemed Lamborghini cars and meet on a regular basis. The club’s activities include social meet ups, Lamborghini Roadshows, annual city runs and track circuit drives.

The club was launched in 2011 to bring together lovers of Wranglers, road trips and outdoor picnics. Most members of the club own the Jeep’s Wrangler, which has different models. The Jeddah Jeepers regularly organizes trips to traverse the roads and deserts of the Kingdom. Adventure seekers and road trip enthusiasts belong in this fun club. The club is part of the Share The Road KSA initiative that promotes safe driving and ethical road sharing.

Mohamed Yousuf Naghi Motors recently launched the Hyundai Sports Car Club in January to strengthen the company’s relationship with its sports car customers. The club aims to connect with the members, and emphasise the importance of social work and responsibility towards the community. At this year’s Jeddah Motor Show the club’s member Nabil Baghdadi won the Best Modified Hyundai Sports Car award.