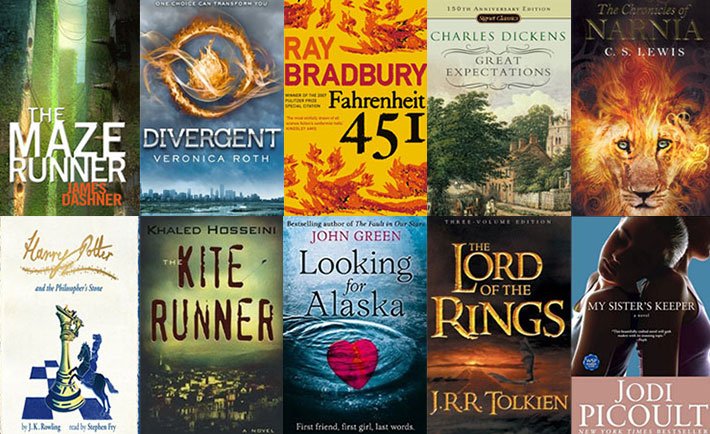 These are some of the most brilliant literary pieces to have ‘walked’ this Earth, these are just 20 of them that a modern day reader can relate to. *Note: this list has not been made in any particular order.

This one is obvious. It is about an orphan boy who finds out he’s a wizard and survived a killing spell as a baby. A journey of self-discovery, friendships, sacrifices and countless other life lessons that we can all take away from. If you haven’t read this book, you are missing out on life.

2. Angels and Demons by Dan Brown

One of the many epic books written by Dan Brown, this is about Robert Langdon, a Harvard Professor who is absorbed into one of Europe’s most enthralling mysteries.

3. My Sister’s Keeper by Jodi Picoult

About a girl who has been brought to this world to help cure her sister’s cancer. It has a plot twist in the end that makes it worth the read.

One of those books every English/Literature teacher assigns. It is very fascinating look into how the world works.

Though Roald Dahl is mostly known for stories for kids, this particular collection of short stories is for older readers that are full of mysteries and unusual plots.

7. Lord of the Rings & The Hobbit by J.R.R Tolkein

These books really take the world of fantasy and adventure to a whole new level. Full of epic fights, magic and dialogues, these books are bound to have you addicted to the world of ‘Middle Earth’.

8. The Alchemist by Paul Coelho

This one’s a more philosophical one that follows a young Andalusian shepherd on his journey to Egypt as he keeps having dreams about finding treasure there.

9. To Kill a Mockingbird by Harper Lee

Published in 1960, this book covers some important issues found in our societies till today.

A classic of its own kind, this book covers themes such as wealth, poverty, love, rejection and good vs evil.

Based on the themes of teenage angst and alienation, this novel deals with some complex issues such as identity, belonging, loss and connection.

12. Chronicles of Narnia by C.S. Lewis

Another adventurous series that takes us on a journey of 4 siblings who fall upon a secret land called Narnia.

13. Perks of Being a Wallflower by Stephen Chbosky

This one is also a coming of age story but focuses on an introverted teenager who his quite intelligent and an unconventional thinker.

14. The Divergent Trilogy by Veronica Roth

An insight into what the future may hold in terms of defining citizens of society and putting them in certain categories that they can’t really deviate from.

15. Looking for Alaska by John Green

Recently turned into a movie, this story revolves around a teenage boy who goes onto look for a girl who suddenly disappears after a night of revenge-taking adventures.

16. The Maze Runner by James Dashner

Another novel about young people in a different sort of world, forcing them to make sacrifices and fighting things they never thought they’d be fighting.

17. The Kite Runner by Khaled Hosseini

A story about family, friendships, loyalty and redemption. Requires the reader to be a bit courageous to deal with some of the sad plot twists.

Like most of Orwell’s themes, this book talks about governments, politics and cults.

An insight into another future American society where books are outlawed and firemen have to burn any books they may find. It represents themes of the consequences of suppressing ideas and creativity.

Set in Victorian society, this book’s about a family that brings home an orphan from Liverpool. It also happens to talk about an accident and a curious supernatural encounter.

If you’re just starting to read or are an avid reader, there are countless other books out there that should also be read. This is just a summary of some awesome literary pieces that have been published in our time or in history.