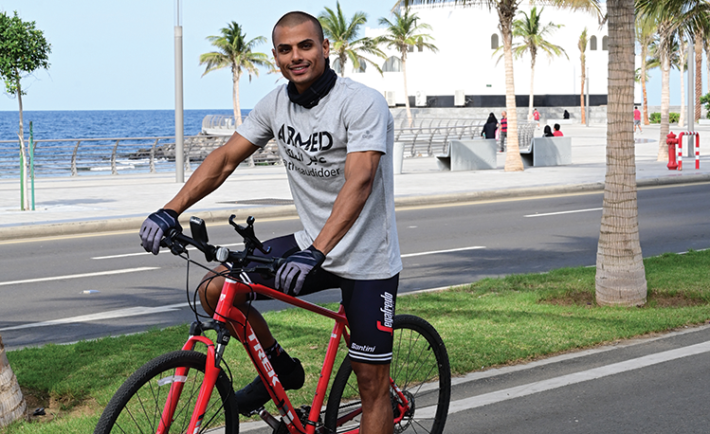 Graduating from civil engineering and breaking a cycling record across the Kingdom, Hamad Al Hawesh has proven to the young generation that with will power, anything can be achieved. Hamad lives for the thrill of extreme challenges, and this is why he took it upon himself to set a new record in the Kingdom for being the first Saudi to cycle from the West to the East in five days and 12 hours.

Hamad calls himself a Doer, he is not specifically a cyclist, rather, Hamad seeks extreme challenges that trigger his body and mind, and dares to take one victory after the other.

His belief that nothing is impossible with the right mindset supports Vision 2030 and emphasizes the power our minds have over everything.

Hamad shared with us his incredible experience, from the mental and physical resilience to the tough challenges he had to overcome during his cycle. “Climatic fluctuation, inclines and declines, lack of sleep and my strict meal plans were some of the hardships I faced during my journey.” He would get only four hours of sleep per day in the trunk of an SUV as he had to cycle up to 17 hours in a row to reach his destination in Khobar in the deliberated time record. Hamad was only able to eat certain foods in little quantities so as to not upset his stomach during the cycle. With Hamad’s life motto “mind over everything” he was able to face the challenges and triumph over any doubts that crossed his mind.

“The toughest part of the journey was the incline of Al Muzahmiyya in Riyadh border as it took me 18 minutes to cross it as well as the incline of AlSayel road, as it was raining at the time and I really had to use all my strength.” 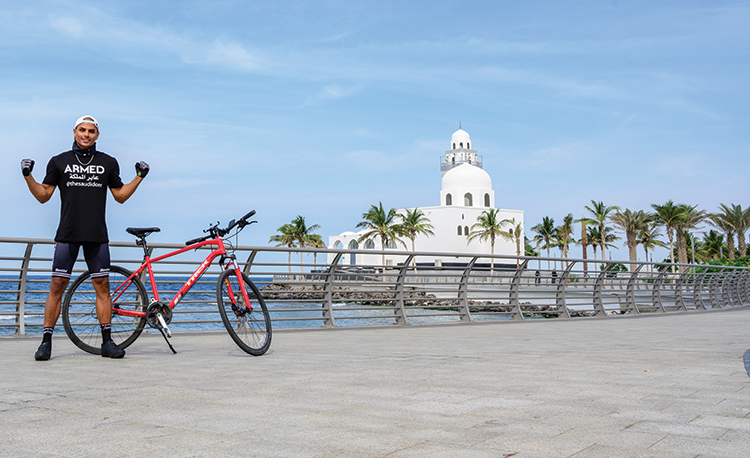 Hamad didn’t particularly follow a training program for this challenge. He took us through his usual intensive workout that includes a lot of cardio, and his own style of training called “mix workout art,” which is basically training the body for better stamina under tough conditions.

Hamad said that remaining focused on his goal and setting his mind right has helped him not only on the road, but in his everyday life. “Once you lose focus, you lose a lot of your power. I consider it a key element of success, and without the mental concertation I had to practice, I would have not reached that far.”

Hamad added, “Once you take yourself to an unusual and extreme level, God empowers your thoughts and your strategy to be a stronger person. I believe that keeping the faith is a vital component of the process.”

He also emphasized on the importance of “mind over everything.” After he reached 500km, his body started feeling tired and his brain would start sending him thoughts of doubt, but believing that he is destined to finish this journey pushed him to exceed his limits. “The last 70km were the toughest because I was really starting to crash and I had very negative thoughts, but having an unwavering soul is really what got me there.”

Hamad shared his gratitude for the people who have given him sustenance all the way. “During my journey, I had five supporters who were rotating in the SUV, giving me all the encouragement I needed. I would like to thank them for being my support system and helping me achieve my goal.”

Curious to find out what he is planning next, Hamad gave us a hint by saying that his upcoming challenge will definitely be extreme and diverse, highlighting “mind over everything” through a different technique.