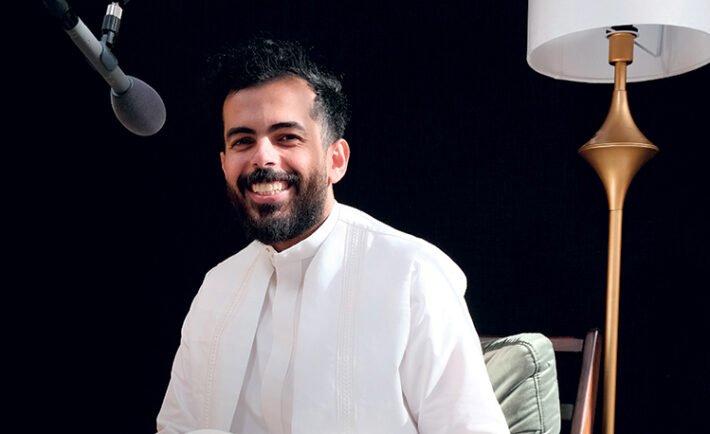 Riding on the Sound waves

Media has the power to encapsulate, enthrall and represent. With the field creatively altering perceptions and sharing stories that showcase what the bold new Saudi is all about, Destination KSA dives deeper into narratives of the country with three visionaries at the forefront of change.

Whether through movie screens, our playlist, or even the podcast sound waves, join us in discovering what goes behind producing and visualizing content that captivates the audiences of today.

Abdulrahman Abumalih, a young Saudi entrepreneur, CEO, and founder of Thamnyah, was founded in 2016. He is also the founder and host of the popular podcast Fnjan, reaching global audiences and covers a wide range of topics. Between 2012 and 2016, Abumalih was the editor-in-chief of an Arabic online news platform offering daily news about the digital world, such as social media, technologies, entertainment, and mobile industries.

He studied software engineering for his bachelor’s degree at Arizona State University and later gained an associate degree in computer programming from the Dammam College of Technology. He worked as the head of development there, helping them set up their university website.

Thamnyah began in 2016 with the idea of creating a platform that would leave an impact on people. When Abumalih was studying in the U.S., the thing that affected him the most was listening to different forms of content, “it changed the way I think and made me who I am today,” he claims. When he returned to Saudi, after extensive research, he realized that there was a major shortage of Arabic content on the internet, with a total percentage of 0.6% of all forms of content.

According to Abumalih, most of the Arabic content available was a mix of official entities that rely mostly on advertisements leading to click-baiting and others just putting content out there regardless if it’s good or bad. “People always told me that content does not get you money, but when I went to the U.S., I saw a lot of companies that are fully based on content creation, such as Buzzfeed for entertainment, Vice for news, and so on, which were all generating money whereas people kept saying Arabic content will not generate any money which was the challenge to face, and I like challenges, and I said I want to create that thing.” Thamnyah was the first company in the Arab world to create a business based on content, especially podcasts. Abou Maleh argues that due to the accessibility and low barriers to entry of podcasts, they decided to begin with that and work their way through different forms of content.

“We have around 400 million Arabs worldwide, which is a high number compared to the amount of content available. I didn’t want to be the person that complains with no action, so I decided to try.”

They now have additional documentaries and newsletters distributed on their platform. “Focusing on podcasts was clear to me because all the traditional media is slowly dying, and new media is the way and content are consumed at all times.”

To monetize it, Abumalih says that they have plans to create a subscription fee to create a sustainable business model that does not rely on ads alone. “Ads don’t generate enough revenue, and it forces you to create content that aligns with advertisers and limits you in your content. We want to create a strong enough library worth paying for.”

According to Abumalih, making podcasts is much easier than the rest of the content creation. All you need is a good recording microphone, an idea, and the ability to talk. You record your content and upload it to the streaming platforms, which might require a minimal subscription fee, and people will listen to it. It has almost no barriers to entry compared to other content-creation mediums, such as films. Also, the length of your podcast does not affect the number of people that would listen.

A podcast is a growing medium, with Spotify investing 500 million dollars in podcasts and began identifying itself as “Music and podcasts.”

Apple now has original shows in podcasts; Amazon bought “Wondery podcasts” for 100 million dollars. However, the biggest investments in sound content in the Middle East are in Saudi Arabia.

Also, the highest number of podcast consumers is within Saudi Arabia. The fast rise in the standard of content within the Saudi market spiked a strong interest in consumption by Saudis, where more and more companies are becoming more content-focused to provide the public with what they want. In the modern way of creating podcasts, many are mixing sound and video, filming the podcast, and giving the audience a sonar and visual experience. When the audience sees the face of the people they usually listen to, it makes the podcast a bit more approachable and trustworthy. It puts a face to the voice.

“The first time we made the podcast visual, it was a coincidence. It was back in 2019. We didn’t want to release the full episodes, and we said that not everyone knows about our podcast, and we wanted to film the episodes, get snippets out of it, and share them on social media platforms so the people would know the content. Then they’d come to listen to the podcast.”

In youtube, it’s all on the same platform. “On youtube, if you’re watching an episode about a specific topic on Al Jazeera, for example, the next recommendation can be an episode of Fnjan because it tackles a similar topic. This was very useful to us. If we did not share our content on youtube, we wouldn’t be what Thamnyah is today.”

“The shift began as an organic one and slowly became crucial in our strategy. Today we have three programs shot on video, but the goal is to have that for almost all our programs. Some cannot become video-based, of course, but the ones that can, we will make it happen.”

In conclusion, we asked Abdulrahman Abumalih what to remember when starting a podcast. “To start your podcast, you should do something that resembles you, not to have fame as your goal, and to want to express your opinions and views. But most importantly, to begin and be consistent about it.”