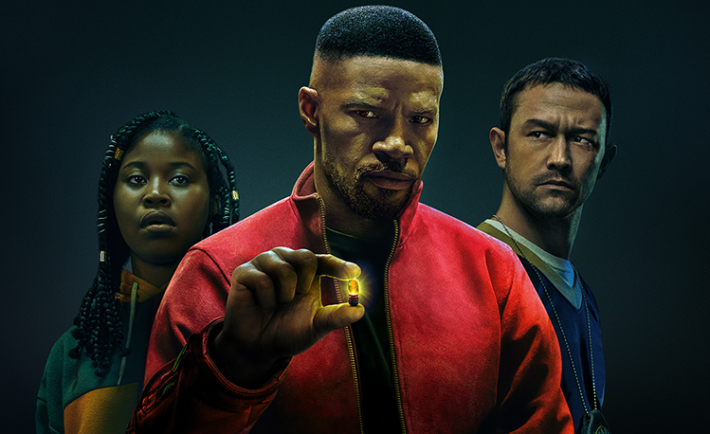 Even though the story is implausible and full of typical tropes of its genre, Project Power presents refreshingly interesting characters and delivers blockbuster-worthy action that is rooted in real-world problems.

Netflix has gone ahead and brought all the action and excitement for Summer 2020 (so, no chill-pills required) with not one,  but two powerful sci-fi action films that defy the senses and exceed expectations; The Old Guard, starring Charlize Theron and her team of centuries-old, self-healing immortals, and the newly released Project Power, starring screen-favorites, Jamie Foxx and Joseph Gordon-Levitt, along with the young and new-coming Dominique Fishback.

Project Power portrays the city as it is flooded with a new disaster; a street drug that gives users 5-minutes of arbitrary superpowers. The movie follows three main characters; former soldier Art (Jamie Foxx), local cop Frank (Joseph Gordon- Levitt), and teen Robin (Dominique Fishback) as they cross-paths and collaborate to find the source of the drug, each driven by their own motive.

Suffice it to say though, Project Power is not for the faint-of-heart, it has its share of violence and bone-crunching gore that is uneasy to watch, but necessary to show the predominantly dark and dangerous side of these power-pills. The movie also proudly embraces its typical genre tropes by injecting the narrative with the thought-provoking theme, uttered several times by the film’s main characters, of  “What’s your power?” And, consequently, “What will you do with it?” We see the ripple effects of this theme dispersed throughout the film, messages of teamwork, loyalty, compassion, and bravery, exhibited collectively in one character; Robin, played by Fishback, who steals the spotlight with her profoundly genuine and compelling performance as the young high-schooler.

While the movie gets away with countless pop-culture reference courtesy of Gordon-Levitt, Project Power’s…well, power, lies in its dedication to draw parallels between its fictional narrative and a number of real-life social issues; corruption within the hierarchy of the justice system, the greed and inhumanity of drug manufacturing corporations, and the stereotypes and injustices black people, and particularity black women, face in society. Only in this universe, we get to see the bad guys lose, and the good guys win.

The movie has all the makings of an entertaining summer blockbuster: an exciting narrative that is only amplified by fast-paced scenes, vibrant sets, and visceral effects, powerfully appealing performances, and an addicting bass-heavy score that carries both the action and emotion of the film from the opening title sequence all the way to the final credits.